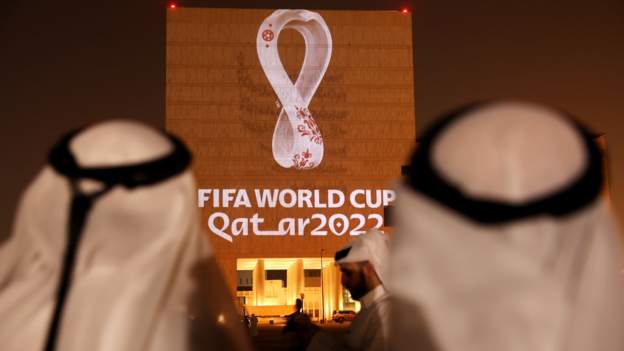 Ten European football associations including those of England and Wales say “human rights are universal and apply everywhere” after FIFA asked nations competing at the Qatar World Cup to “now focus on the football”.

The world governing body wrote to all 32 teams following a controversial build-up to the tournament, which starts on 20 November.

Host Qatar has been criticized for its stance on same-sex relationships, its human rights record and its treatment of migrant workers.

The FIFA letter was criticized by Human Rights Watch, Amnesty International and LGBT+ campaigners in England and Wales.

While acknowledging the “significant progress” made by Qatar, a joint statement issued by members of the Uefa Working Group on human rights and labor rights said it would “continue to press” FIFA for answers on outstanding issues surrounding migrant workers.

“We acknowledge, and welcome, as we have done in the past, that significant progress has been made by Qatar, particularly with regards to the rights of migrant workers, with the impact of legislative changes demonstrated in the International Labor Organization’s recent reports,” said the statement.

“We welcome the assurances given by the Qatari Government and by FIFA regarding the safety, security, and inclusion of all fans who travel to the World Cup, including LGBTQ+ fans. We also recognize that every country has issues and challenges and we agree with FIFA that diversity is a strength.

FIFA’s letter, signed by its president Gianni Infantino and secretary general Fatma Samoura, urged that football should not be “dragged” into ideological or political “battles” and it should not be “handing out moral lessons”.

Peaceful protests have been planned by some players, while England’s Harry Kane and nine other captains of European teams will be wearing ‘One Love’ armbands. to promote diversity and inclusion.

Denmark will wear “toned-down” shirts to protest against Qatar, with kit provider Hummel saying it “does not wish to be visible” in a tournament it claims “has cost thousands of lives”, while Australia’s squad have released the video urging Qatar to abolish its laws on same-sex relationships.

England’s FA has backed calls for compensation to be awarded for “any injury or death to any construction project” for the World Cup.

“We will continue to support the momentum for positive, progressive change and continue to advocate for a conclusive outcome and update on the two key outstanding issues we have been discussing with FIFA for a long time,” the Uefa Working Group’s statement continued.

“Fifa has repeatedly committed to deliver concrete answers on these issues – the compensation fund for migrant workers, and the concept of a migrant workers center to be created in Doha – and we will continue to press for these to be delivered.

“We believe in the power of football to make further positive and credible contributions to progressive sustainable change in the world.”

On Saturday, protests were held at Bundesliga games in Germany with fans holding up banners in the crowd.

Qatar’s Minister of Foreign Affairs Sheikh Mohammed bin Abdulrahman Al-Thani has said criticism of his country’s hosting of the World Cup amounts to “hypocrisy”, while calls for a boycott are “are being peddled by a very small number of people, in 10 countries at most, who are not at all representative of the rest of the world”.

And in an interview with sky on Sunday, he added people “cannot accept a small country from the Middle East” hosting the World Cup.

“Preaching from a distance is not a solution,” he said.

While written diplomatically, this joint statement is a robust and defiant response to FIFA’s remarkable ‘stick to football’ letter last week, which took the FA and the FAW by surprise, dismayed many in the sport, and which was widely condemned by human rights groups and LGBT+ campaigners.

The intention of these 10 west European federations is to firmly reassert their teams’ right to make a stand on social issues in Qatar, such as the plan by England and Wales players to wear rainbow armbands as part of an anti-discrimination campaign in a country where it is illegal to be gay.

And it is a clear rejection of Fifa’s request that political and human rights concerns are put to one side for the duration of the World Cup amid a build-up that has been blighted by a myriad of ethical and geopolitical controversies, and an increasingly aggressive approach by the hosts towards their critics.

There is also a sense of the mounting frustration that many within European football feel over what the statement refers to as “two key outstanding issues”; a Migrant Worker Center and a compensation fund for those killed or injured during World Cup preparations.

While acknowledging “significant” labor reforms, members of UEFA’s Working Group on human rights had expected FIFA to help deliver progress on both these causes several months ago, and will hope that this will spur them into a renewed effort.

With the start of the tournament just days away, it remains to be seen whether this statement helps, but it is certainly a reminder of the tension and division that surrounds final preparations for the event.