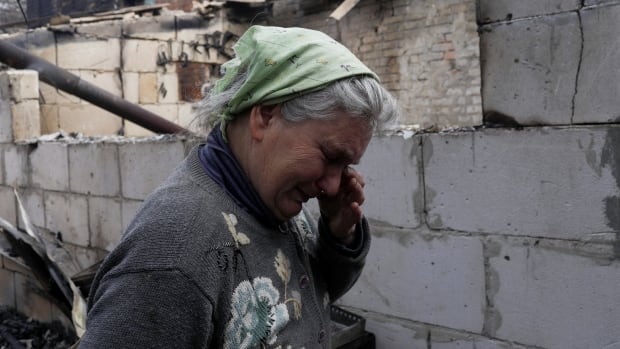 The Russian missile turned Vera Kosolopenko’s small home into a fiery pyre that consumed the Bible and all of the other precious mementos that she cherished of her late husband.

“I have lost everything that connected me to him,” she wept on Saturday as she stood by the smoldering remains of the house destroyed by the missile a day earlier. “All I have left is the portrait engraved on his gravestone of him.”

The diminutive 67-year-old widow, who lives in the northeastern village Bezruky, is lucky to be alive.

She and two friends were drinking tea inside the house when the missile slammed into the roof.

Villagers said the missile was one of five that in quick succession struck the leafy hamlet that sits 26 kilometers north of Kharkiv, close to where Ukrainian troops have driven Russian forces that tried to overrun the country’s second-largest city in Moscow’s Feb. 24 invasion.

Village hit with shellfire but not occupied

The Russians did not occupy Bezruky, located only 17 kilometers from the Russian border. But they occasionally sent vehicles to patrol its narrow dirt tracks before their forces were pushed back by the nearly two-week-old Ukrainian counteroffensive, villagers said.

Since the war began, Bezruky has hardened near-constant shellfire that has destroyed or damaged many of the homes. Rocket and bomb craters dot its lanes and the rutted gravel road leading to the village, an occasional trench and bunker visible in the trees lining its verges.

WATCH | What happened in Russia’s war in Ukraine this week:

What happened in Week 12 of Russia’s attack on Ukraine

Russian and Ukrainian troops fight village by village in the Donbas, with little progress for the Kremlin. The war pushes Finland to seek NATO membership and a Russian soldier is charged with the first war crime since the start of the conflict. Here’s a recap of the invasion of Ukraine from May 7 to 13.

Countless Ukrainian villages such as Bezruky have been shattered by the invasion that nuclear-armed Russia claims it was forced to launch to eradicate a threat that Ukraine posed to its security.

Ukraine and its foreign supporters say thousands of people have died in the Kremlin’s unprovoked war of aggression that has uprooted millions of others and left cities and towns in ruins.

Kosolopenko, a mother of five who hails from the northeastern city of Sumy, moved in 2001 with her late husband to the village, where he had relatives. He died two years ago.

There has been no power or bottled gas since the war erupted. She has mostly lived on humanitarian aid and eggs provided by a few chickens, which she cooks in her backyard over a fire lit under a makeshift oven of several bricks and metal sheets.

The missile, Kosolopenko said, fell at 9 am on Friday. It set her roof ablaze in a shower of flaming shards that ignited a wooden storeroom in her narrow backyard.

“We heard a huge explosion when it landed and all of the windows shattered,” she said.

As a second rocket struck nearby, she and her friends fled into a brick-lined cellar dug on the side of her house.

Kosolopenko “took her tea with her, and I grabbed a plastic bag with a book in it, and we ran to the cellar,” said her friend, Alla Bazarnaya, 40, of Kharkiv.

Bazarnaya said she moved in with Kosolopenko in January after the pair became friends in a hospital in Kharkiv where she was being treated for a stroke.

“The most important thing is that I felt I was spared by God and that we had to get away into the cellar,” Bazarnaya said.

The roof, the second floor and the storeroom were on fire when the pair emerged.

Neighbors tried to extinguish fire with buckets of water

Kosolopenko said she called a nearby fire department the neighbors wielding water-filled buckets and other containers hit to her home. They were unable to extinguish the flames.

“The firefighters replied that there was shelling, and they could not get here,” she said. “They did not get here until six hours later. If they had made it earlier, they could have put out the fire on the second floor and saved the ground floor.”

The flames reduced her house and storeroom to fire-blackened shells, leaving the backyard carpeted with charred rubble and ash. Only cinderblock and brick walls were left standing.

Kosolopenko said she lost everything, including the family photographs and the bible that had belonged to her husband’s father.

“This is so painful for me,” she wept. “I don’t know how I will rebuild this house. I loved this place.”