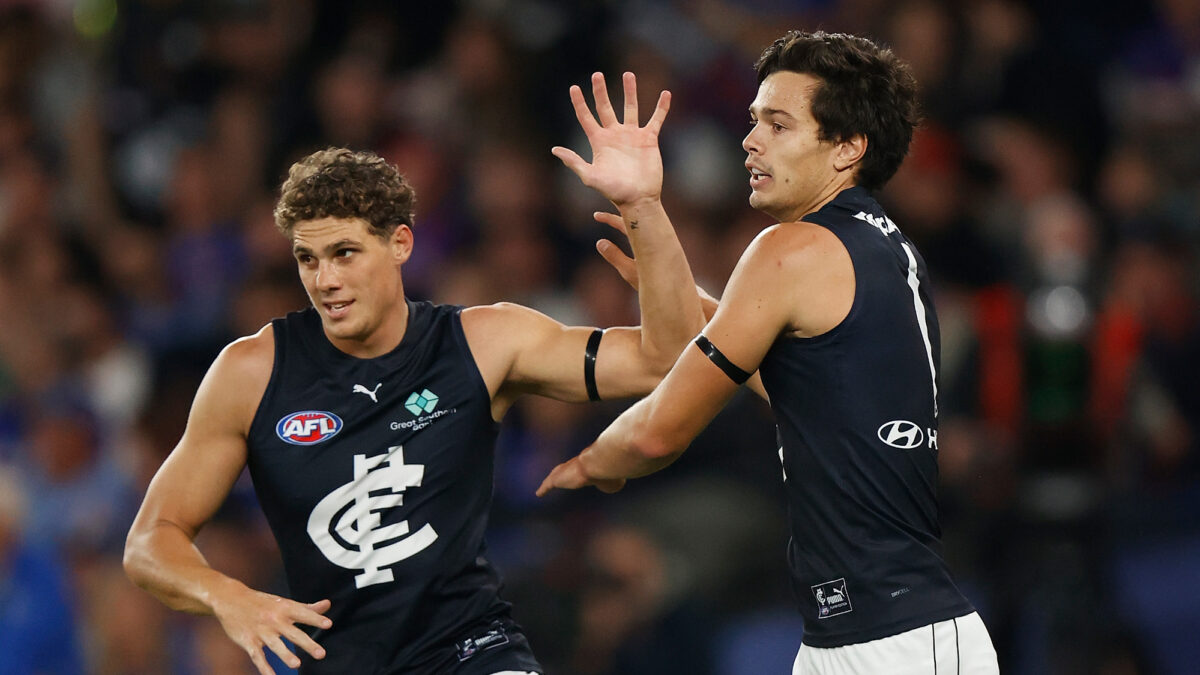 Carlton still has the ability to deal some damage in 2022.

It’s important to preface the discussion by highlighting that, regardless of public opinion, the season is already an overall success for Michael Voss and the Blues.

As one of the biggest clubs, we inevitably hold Carlton to a different standard. The big teams are divisive, predominantly due to the passion in which supporters vocally love the team, and the detractors hate them.

In recent years, given the woes and frustrations of repeated disappointments, the supporters have often leant into the negative emotions.

So, when Voss was appointed, fans were hopeful of improvement and good signs, which have most certainly come in 2022.

Realistically, the plan was always for this year to be the one for Voss to start to change the ways of the Blues, sorting through the talent at his disposal and ingraining his tactical beliefs onto the playing group.

Often, fans can think on too micro a scale when a team that’s trying to build operates on a macro level.

Therefore, yes, the Blues have already earned a tick for this year, regardless of what happens in the last three games.

Does that mean we should expect Carlton to lose their last three games and, should other results go against them, miss finals?

Absolutely, the Round 20 loss to the Crows was as disappointing as it was costly. They were completely outplayed and outhunted for the ball, while monster games from Patrick Cripps and Sam Walsh weren’t enough. 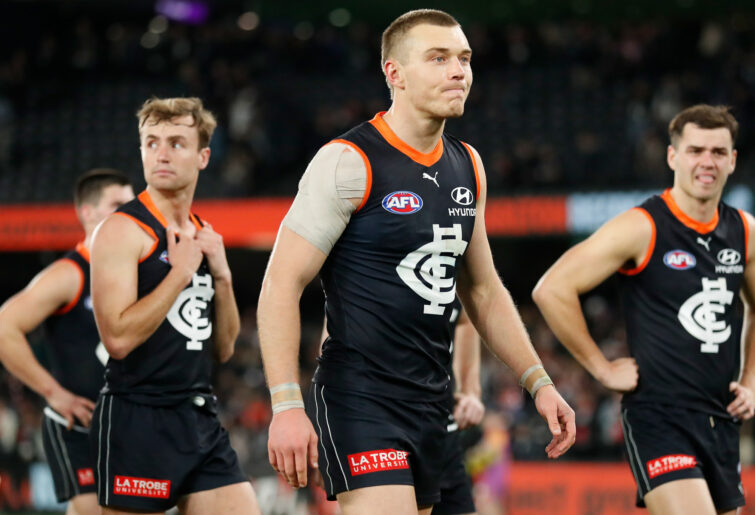 Truthfully, though, this was the first genuinely shocking performance, outside of the first quarter of the St Kilda game. The Geelong game was a competitive performance initially and then the gulf between the two teams became apparent.

Beyond this, the Blues’ losses have sat on a scale between utterly wasteful and competitive in parts – about what you’d expect from a team fighting for a spot in the eight.

Zac Williams, Mitch McGovern and Marc Pittonet have been long-term absences during their injury stints.

The Blues have had six players subbed off who have not been able to return within a “short-term” time-frame, ranked second in the league behind the Eagles.

Consider how disruptive it is to have to change tactically so often within games due to the best-22 players being removed from the equation without notice – it has affected Carlton perhaps more than anyone.

The defensive scheme is heavily reliant on Weitering, while the defensive, protective work of Hewett in particular, has caused a huge hole to emerge recently.

Yet no injury hurt as much as Pittonet’s, who is arguably the most underrated piece to the Carlton puzzle.

People are naturally drawn to the high-flying, athletic Tom De Koning but since moving to Carlton, Pittonet has become one of the best pure rucks in the league – his hitout-to-advantage percentage of 41.1 per cent is four per cent clear of any other ruck in the league.

The Blues went undefeated in the four games to start the season, including wins against pre-season finals-fancies Richmond, Bulldogs and Port Adelaide, with Pittonet’s tap work and crucial follow-up clearances. His absence has been enormous.

At one point in the season, there was a deep concern of a second-half drop-off pattern emerging. The validity of such thoughts has varied between games – sure, the Blues like a hot start but they’ve realized that four-quarter efforts are what breed success in the modern era.

With three games left, the Blues have to play Brisbane, Melbourne and Collingwood. They must win one of these games to play finals.

For all the criticism leveled at the likes of Walsh and Cripps for collecting so much of the ball while Carlton lose, there’s almost a purposeful ignorance into the influence of these players still have on the team even in defeat.

For a couple of seasons, it has felt like Cripps’ consistency has faded with the weight of the team on their shoulders. His current form line is indicative of a refreshed and hungry player, one that will thrive with having a good ruckman at his disposal.

Just as the season should be seen as a positive one on the larger scale for blues fans, there should also be a bit more positivity about the prospects of sneaking a win and getting an opportunity to play finals.

Despite the fresh injury to Nic Newman, the Blues’ defense is relatively settled now that McGovern is back and able to contribute aerially. Part of Weitering’s development was designed to have the former Crow reading the play next to him – Weitering has since come along quicker without him and will only benefit further with his teammates by his side of him.

We know the strength of the Blues’ key forwards – the undersized Charlie Curnow is leading the Coleman Medal, while McKay is waiting for a chance to dominate a game. We can expect Jack Silvagni to earn a reprieve and his utility status will be effective. 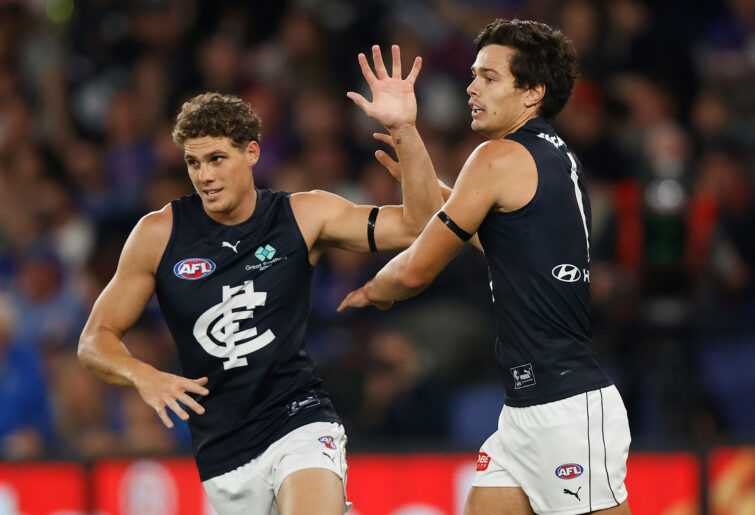 The biggest question will ultimately be how Cripps and Walsh cope without both Hewett and Kennedy. The reintroduction of Pittonet with a senior game under his belt is of enormous benefit and makes a significant difference to the midfield group, regardless of who’s in there.

While the Blues are the highest possession team and are often guilty of overusing the ball, it’s that advantage in the center square, during the 6-6-6 setup, that will really keep them competitive and give them the best chance to beat a finals team.

It’s their point of difference, having two dominant key forwards, two athletic types and a couple of midfielders with the strength to push the ball forward out of the medal. Even against quick-moving teams like Brisbane and Collingwood, Pittonet’s influence is hard to stop.

This season, too, has shown that the performance against Adelaide was an outlier – the floor of this team has generally been higher than most others and rarely do they put in four bad quarters, which makes it difficult to comprehensively outplay them.

It could absolutely come down to the penultimate game of the season to determine whether or not Carlton plays finals – perhaps the Blues’ best chance of winning a final this season is having back-to-back games against the Magpies.

But really, the next three weeks are going to test the mettle of this playing group and coaching staff that had to navigate through trickier waters in 2022 than many are giving them credit for.

If the Blues can get through games unscathed injury-wise and be able to execute their planned tactics, they have a chance to sneak over the line a couple of times in the run home.

This is a team that has been good enough to earn a finals spot and had strong patches against some of the league’s best teams, when the style of play has been simple and getting the ball forward has been the main target.

With stars on every line with plenty of experience now, one suspects that the Blues can rise to the occasion.

The season isn’t over yet for Carlton, who can still create chaos in the final three rounds.