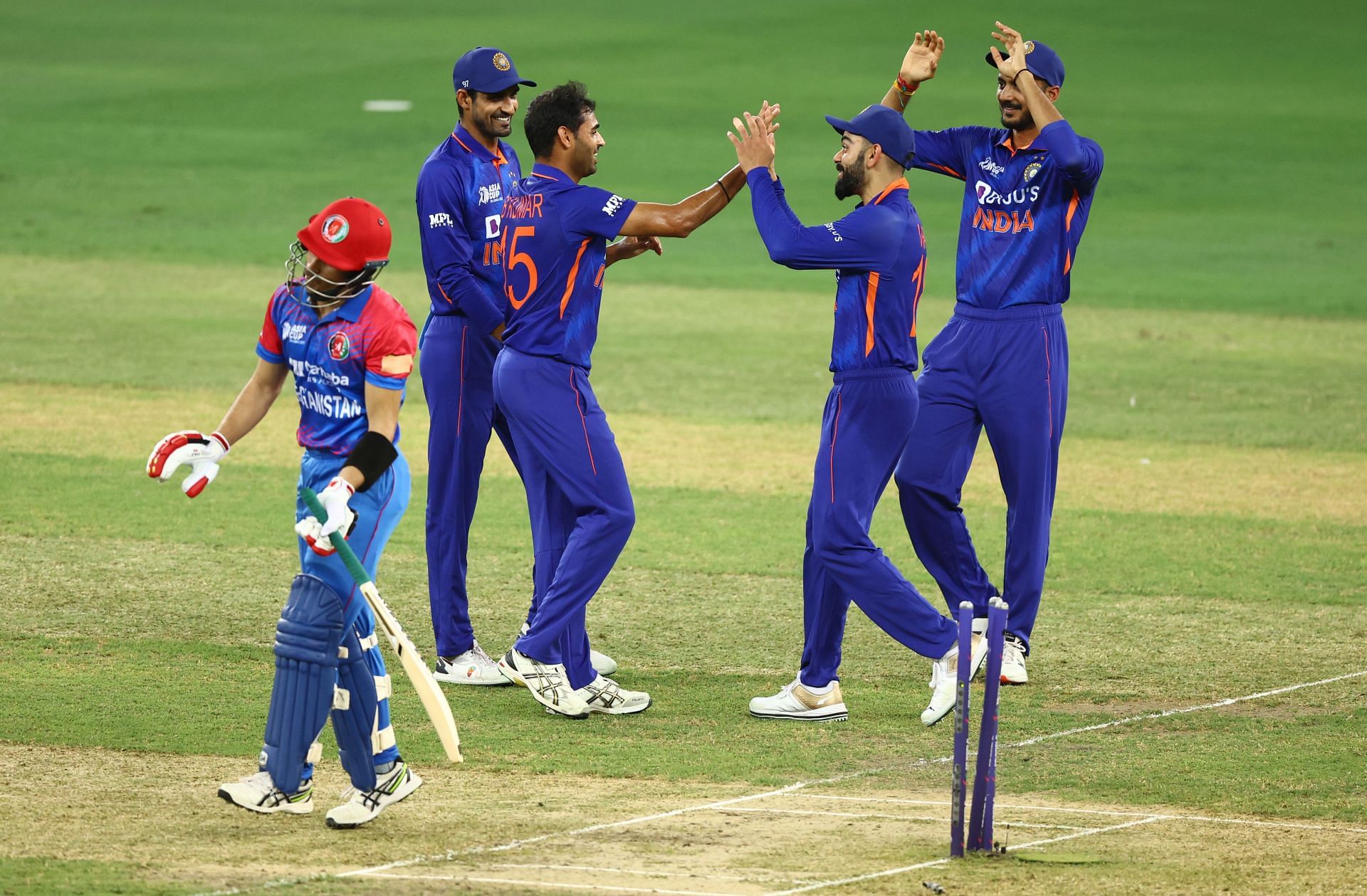 India beat Afghanistan by 101 runs in yesterday’s Super 4 match of the Asia Cup 2022 at the Dubai International Cricket Stadium. Sent into bat after losing the toss, the Men in Blue put up an imposing 212 for 2 as Virat Kohli broke his century drought. Chasing the massive total, Afghanistan crawled to 111 for 8 as pacer Bhuvneshwar Kumar registered unbelievable figures of 5 for 4.

With India having been knocked out of the Asia Cup, skipper Rohit Sharma decided to rest himself. KL Rahul took over as captain for the game, while Kohli opened the innings with him. The new opening pair put on a brilliant stand, adding 119 runs. While Kohli smashed 122* off only 61 balls, Rahul notched up a much-needed 62 off 41 deliveries.

The openers got into the groove by hitting one four each off Fazalhaq Farooq in the third over. They didn’t look back after that. In the last over of the powerplay, Kohli clubbed Mujeeb Ur Rahman for two fours and a six as India crossed the 50-run mark. He reached his fifty off 32 balls with a single off Azmatullah Omarzai to end the 11th over. In the next over, Rahul too reached his half-century with consecutive fours off Mohammad Nabi.

Rahul came up with a flick-pull off Fareed Ahmad that went for six. There was some respect for Afghanistan as Rahul top-edged the next ball, a cross-seam delivery to long-on. Suryakumar Yadav came in and flicked the first ball he faced for six. However, he was out very next ball, bottom-edging Fareed onto his stumps.

At the other end, the Kohli show carried on. In the 16th over, the confident batter launched Rashid Khan for a maximum over wide long-on. He kept finding the boundaries at will to race to 90 with two overs to go. In needed only two deliveries for Kohli to go from 90 to 100, his first three-figure score since November 2019.

After smashing the first ball from Fareed between long-off and long-on for four, he pulled the next one over deep midwicket for a maximum. There were no angry celebrations though. He brought out a wide smile, looked up at the skies and kissed her wedding ring. Could this be the beginning of Kohli 2.0?

The makeshift opener’s celebrations continued in the last over as he spanked the first three deliveries from Farooqi for 6,6,4.

Even as Afghanistan were reeling from the Kohli pounding, Bhuvneshwar gave them no time to recover, registering sensational figures of 5 for 4. Ibrahim Zadran (64* off 59) fought a lone battle for Afghanistan, ensuring they at least crossed the 100-run mark.

Bhuvneshwar got India off to a spectacular start, dismissing both Afghanistan openers in the first over. He first trapped Hazratullah Zazai lbw for a duck with a full delivery that straightened after pitching on middle and leg. He then bowled Rahmanullah Gurbaz (0) through the gate with a good length ball.

The Indian pacer, who was under fire for his below par performances in the tournament, picked up two more scalps in his second over as well as reducing the batting side to 9 for 4. Karim Janat (2) edged an outswinger to Kohli at slip , while Najibullah Zadran (0) was trapped dead in front of the stumps with an inswinger.

Afghanistan lost half their side for 20 when Arshdeep Singh had Mohammad Nabi lbw for 7. Bhuvneshwar then completed a memorable five-wicket haul with a knuckle ball that Azmatullah Omarzai (1) chipped to cover. Ibrahim and Rashid managed to hit a few boundaries before the latter fell to Deepak Hooda for 15, giving a catch to deep midwicket.

Mujeeb (18) also came in and hit two fours and a six before he was undone by Ravichandran Ashwin’s carom ball. India decided to give the last over to Dinesh Karthik. Ibrahim helped himself to two easy sixes, reaching his fifty as well as taking his side past 100.

IND vs AFG 2022: Who was Player of the Match in India vs Afghanistan T20I?

Kohli played an exceptional knock to take India to an imposing total after they batted first. Stand-in captain Rahul contributed an impressive half-century. With the ball, Bhuvneshwar blew Afghanistan away with his five-fer.

For Afghanistan, Ibrahim’s defiant 64* was the only performance of note.

While Bhuvneshwar was a genuine contender for the Player of the Match, Kohli won it for his sublime century.