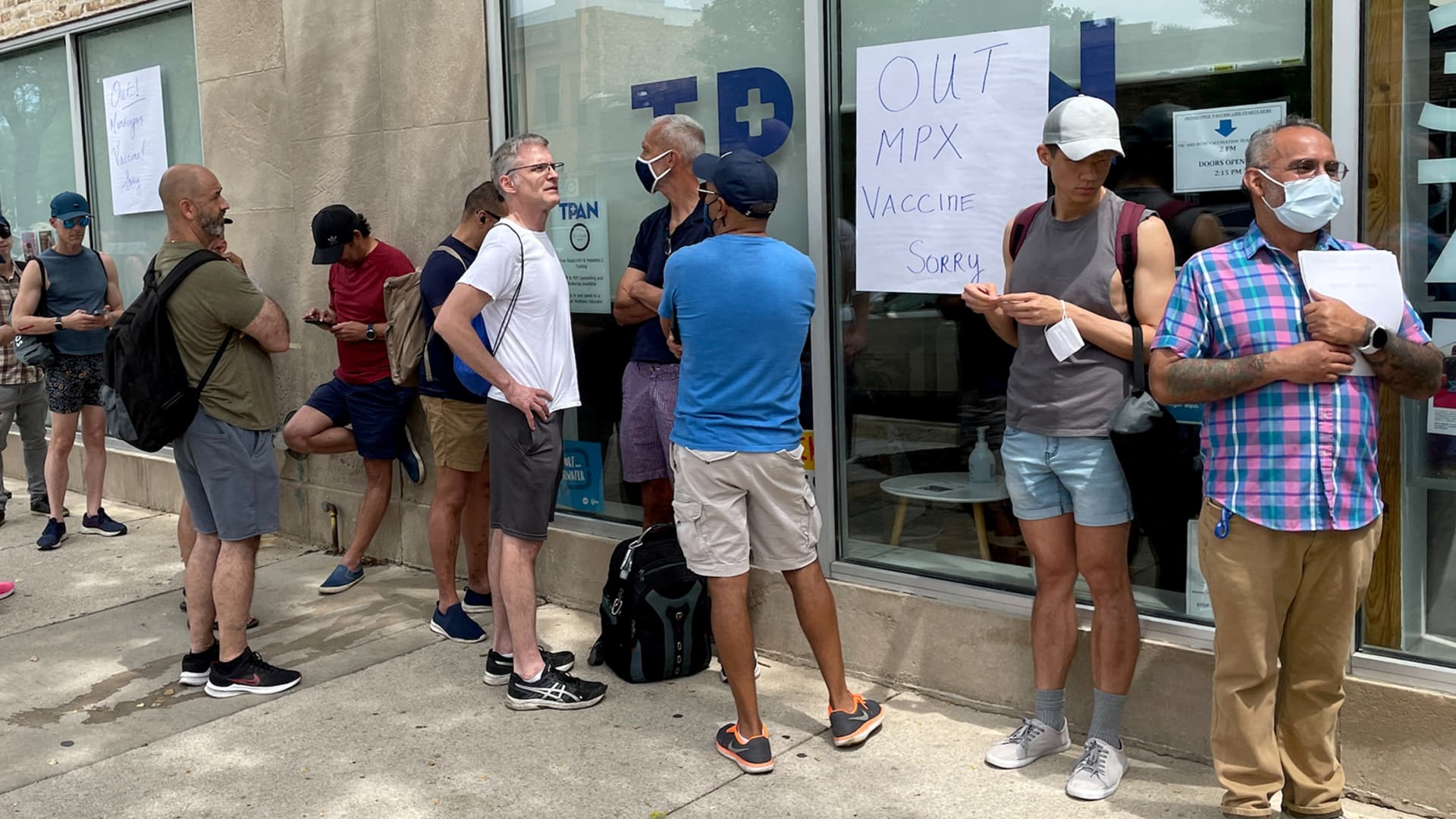 People line up outside the Test Positive Aware Network nonprofit clinic to receive the monkeypox vaccine in Chicago, Illinois, July 25, 2022

The World Health Organization on Wednesday recommended that gay and bisexual men limit their number of sexual partners to protect themselves from monkeypox and help slow transmission of the rapidly spreading virus.

WHO chief Tedros Adhanom Ghebreyesus said it is crucial for public health authorities to engage communities of men who have sex with men to reduce transmission of the virus and take care of those infected, while protecting human rights by fighting stigma and discrimination.

“For men who have sex with men, this includes for the moment, reducing your number of sexual partners, reconsidering considering sex with new partners, and exchanging contact details with any new partners to enable follow up if needed,” Tedros said.

Tedros called on social media platforms, tech companies and news organizations to counter harmful information, which he warned will only fuel the outbreak.

“The stigma and discrimination can be as dangerous as any virus and can fuel the outbreak. As we have seen with Covid-19 misinformation, and this information can spread rapidly online,” the WHO chief said.

The WHO declared a global health emergency in response to the outbreak over the weekend as cases have increased rapidly. The current outbreak is highly unusual because the virus is spreading widely in Europe and North America, where the virus is not normally found. Historically, monkeypox spread at low levels in remote parts of West and Central Africa where rodents and other animals carried the virus.

The US has reported more than 3,500 cases of monkeypox across 46 states, Washington DC, and Puerto Rico, according to the Centers for Disease Control and Prevention. The US has the second-highest number of monkeypox cases in the world, after Spain.

Monkeypox is primarily spreading through skin-to-skin contact during sex, WHO and CDC scientists have said. Lewis said the virus will have an opportunity to spread more widely if people do not take precautions by limiting the number of sex partners and anonymous sexual contact.

“If there’s no intervention in a circumstance where there’s a lot of skin-to-skin contact on a regular basis, perhaps in the context of multiple partnerships or contact with anonymous partners, then that would be a circumstance, without intervention, where the virus can spread more easily,” Lewis said.

In the past, people infected with monkeypox passed the virus on to less than one other person on average, which is the reason why previous outbreaks did not spread as widely. But Lewis said an individual with monkeypox might be able to pass the virus on to more people now because global immunity has waned as smallpox vaccination has become much less common. Monkeypox is in the same family as smallpox, though it causes milder disease.

Experts have not been able to conclude whether transmitted monkeypox represents a new type of sexually infection, although it is clearly transmissible during sex, according to Andy Seale, an advisor to the WHO who specializes in STIs. It’s also unclear whether condoms would help reduce the risk of infection because monkeypox spreads through close physical contact similar to herpes, Seale said.

“The critical piece is really focusing on close, intimate personal contact, prolonged contact that happens during sex as the key mode of transmission,” Seale said. Scientists in Spain and Italy detected monkeypox DNA in semen samples from patients, though it’s unclear whether the virus is actually spreading that way.

Though monkeypox is primarily spreading during sex, anyone can catch the virus through close physical contact. This includes hugging and kissing within a family, for example, as well as towels or bedding that are contaminated. There have been cases of women and children catching the virus during the current outbreak, though transmission appears to be low in the wider community at the moment.

Monkeypox can also spread through respiratory droplets when infected individuals have lesions in their mouth, although this requires prolonged face-to-face interaction. The outbreak still might be able to contain if people limit their risk of exposure now, Lewis said.

Most people who catch monkeypox are recovering in two to four weeks, according to the US CDC. But the virus causes a rash that can be very painful. In the past, monkeypox began with symptoms similar to the flu and then progressed to a rash that can spread over the body.