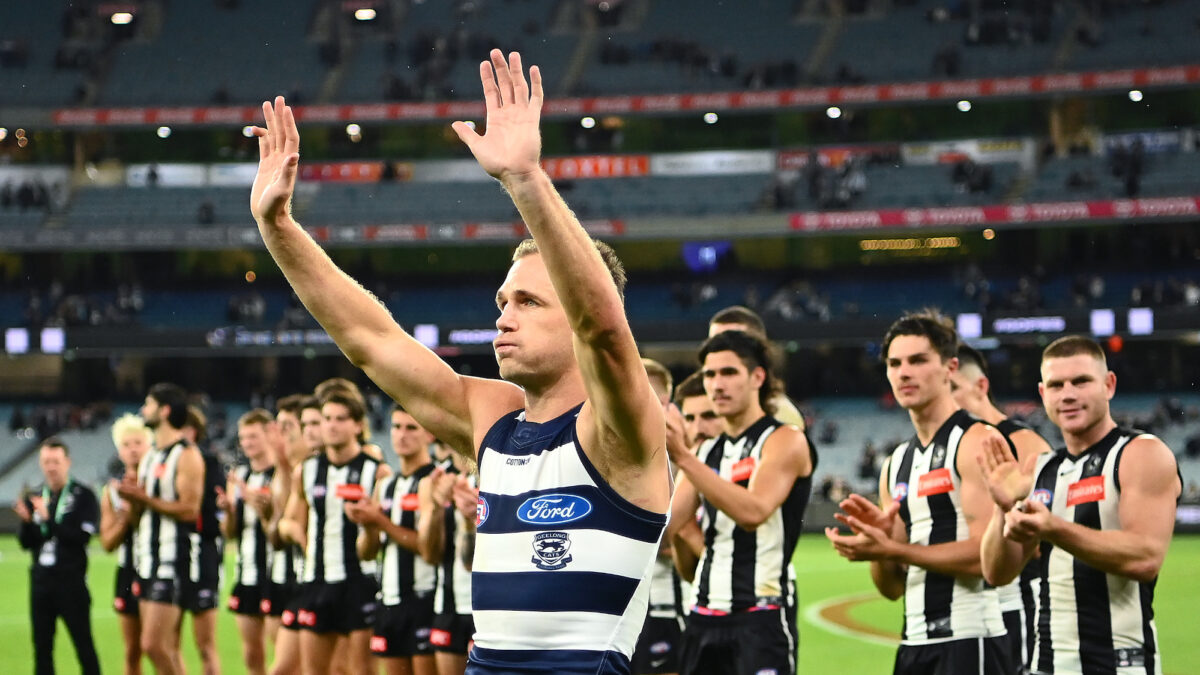 Even if Geelong does not win the 2022 Australian Football League premiership, despite being the favourite, it can be argued that the club has been the powerhouse in recent times.

Since 1990, the first official year of the AFL, Geelong has played in eight grand finals (winning three 2007, 2009 and 2011), has achieved the most top four home and away finishes with 19, and has missed the finals just eight times.

Only Hawthorn (five) and West Coast (four) have won more premierships since 1990, reality helped by Geelong not even making the grand final on six of the last ten occasions when they finished top two after the home and away season.

Even more remarkable is its record since 2007 given the Cats have only missed the top four twice and have finished first or second on 10 occasions.

Geelong is one of the few Melbourne clubs that has managed to emulate, or even surpass, its glory days in the Victorian Football League prior to 1990.

There are a few factors that may help explain Geelong’s recent success, despite that club also facing the same constraints as the other 17 AFL teams with regard to the salary cap and draft system.

First, I am not sure about the generalization that Geelong playing at Kardinia Park has a huge advantage when compared to the other AFL clubs who get to play there just once year at most.

Certainly with less width at Kardinia Park and Geelong having a very good defense in recent years, opponents find it harder to take a direct route to goal, yet some teams have done well in the last ten years including Sydney which beat Geelong there three times in a row (2016-2018) and Fremantle which beat the Cats during the 2013, 2015 and 2022 seasons.

While Geelong’s recent prowess since 2007 also includes many wins over ten goals, a reason why Geelong has achieved a high percentage above 130 ten times since 2007, it may well be that such dominance on the narrow Kardinia Park can enhance big scores and margins. 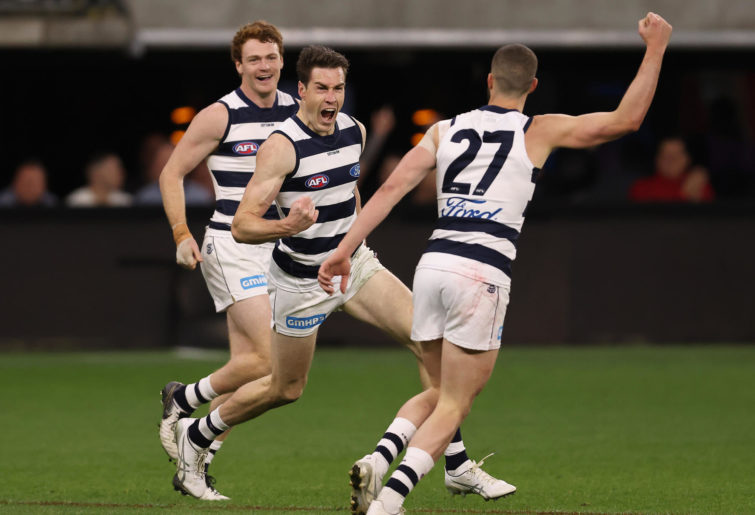 However, you still need a good team to exploit any skill advantage. For example, on 3 April 1971, St Kilda defeated` Geelong 151 to 57 during a season where Geelong finished 10th of 12 and St Kilda second before the latter lost the grand final to Hawthorn.

There has to be many other reasons why any club can be so successful for so long rather than simply focus on its ground given Geelong has lost nearly a third of its games at Kardinia Park since 1897 (472 Wins, 5 draw and 223 losses).

First, as argued in 2020, Geelong has benefited from keeping or attracting good junior players back to the club.
This includes Tom Stewart and Jack Henry and the returning Gary Rohan (Sydney) and Luke Dahlhaus (Western Bulldogs) with all four Geelong Falcons graduates.

It is noted that locality is also used as a reason to acquire top players.

For example, Jeremy Cameron, someone who was originally from the small town of Dartmoor on the border of Victoria and South Australia, was enticed by the rural lifestyle with the opportunity to establish a life out of Geelong on a farm.

The same is true of Patrick Dangerfield who left Adelaide and settled his family in Moggs Creek, a 50-minute drive from Geelong club down the Victorian coastline.

Geelong’s strategy to hold on to good players, regardless of age, is also wise.

While some dismissed Geelong as a 2022 force earlier in the season, citing many star players over the age of 30 such as Dangerfield, Joel Selwood, Tom Hawkins, Issac Smith, Zach Tuohy and Mark Blicavs, why would a team get rid of players still at the top of their game when they have been so close to winning a premiership in recent years?

Since its last premiership in 2011, Geelong has simply played to win the flag each year. 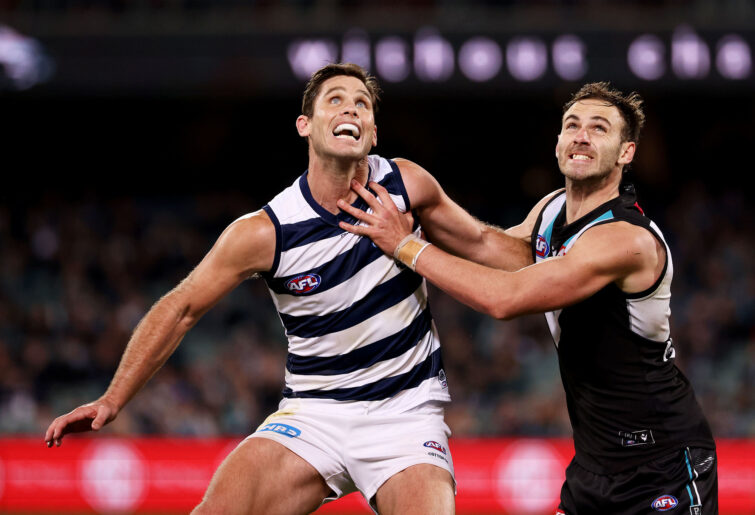 Tom Hawkins of the Cats competes with Jeremy Finlayson of the Power. (Photo by James Elsby/AFL Photos via Getty Images)

Through trades and drafts, under Chris Scott, they have regenerated year after year to successfully replace their depth despite the loss of star players such as Cameron Ling, Jimmy Bartel, Paul Chapman, Gary Ablett and Harry Taylor.

Of course, like any other club, recruitment by Geelong does not always work out.

During November 2020, the gun midfielder Jack Steven, who made a return to the Bellarine region after 11 seasons with St Kilda which included four best-and-fairest awards, made an early retirement with a year of his contract to go after being stabbed earlier in the year and suffering a hamstring injury late in the season.

Similarly, Tim Kelly, drafted by Geelong with their second selection at the 2017 national draft who earned All-Australian selection in 2019, was released in line with his request to return to the Perth to play for the West Coast due to family reasons.

While I am not going to cite statistics, Geelong has incredible depth all over the ground.

In defence, it has super defenders led by Tom Stewart and the 21 year old and the 201cm Sam De Koning who already a star defender.

Up forward, Jeremy Cameron, Tom Hawkins and Tyson Stengle (Geelong) all earned All-Australian selection for 2022, as did their top ruckman Mark Blicavs.

When you add the brilliant Patrick Dangerfield and the worker Zach Tuohy, it is not hard to acknowledge that even mighty Melbourne on its best 2021 form may struggle to beat the 2022 version which is clearly much better balanced and powerful all over the ground.

While I thought Geelong was not as physical as teams like Melbourne and Western Bulldogs in 2021, they certainly appear a lot tougher in mindset in 2022.

I personally think the only way that any team can beat Geelong this year is to dominate the midfield and hassle, hassle and hassle in terms of winning enough of the ball through contested possessions.

While Geelong’s many aging stars will need to be replaced in coming years, I would not be betting against that club continuing to do very well for some time yet given it has been the most successful AFL team since 1990 in terms of final appearances.