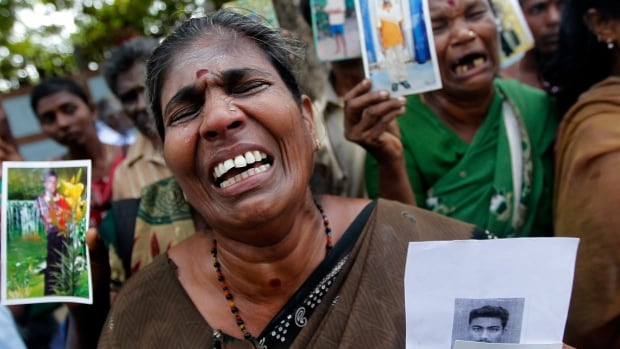 When Sandya Eknaligoda got the news that former Sri Lankan president Gotabaya Rajapaksa had fled the country in disgrace aboard a military jet in the wee hours of a Wednesday in July, she couldn’t quite believe it.

A month and a half later, the human rights activist still can’t fathom that the moment she had dreamed of and prayed for “had finally become a reality.”

It felt like vindication but also an opportunity: Rajapaksa was no longer protected by the immunity that comes with the office of presidency, and could be prosecuted for alleged war crimes committed while he was defense secretary and head of the armed forces overseeing the end of Sri Lanka’s decades-long civil war.

Months of widespread protests over Sri Lanka’s economic crisis spurred Rajapaksa’s abrupt resignation in July. But Eknaligoda has spent years cursing the president, whom she holds responsible for the enforced disappearance of her husband more than 12 years ago.

Prageeth Eknaligoda, a journalist and cartoonist, vanished on Jan. 24, 2010, at the hands of a military intelligence unit, according to Sri Lanka’s Criminal Investigations Department (CID), and he was never seen again, leaving his wife and two teenage sons without their primary breadwinner.

His wife has been fighting ever since to pursue those responsible.

During the civil war that ended in 2009, while Rajapaksa’s older brother Mahinda was president and Gotabaya was defense secretary, the younger Rajapaksa was accused of “persecuting and overseeing what called white van squads” that carted away journalists, activists and civilians suspected of links to the rebels, known as the Tamil Tigers. Some were tortured and released, while thousands of others, like Prageeth Eknaligoda, simply disappeared.

“My main struggle has been to ensure Prageeth’s memory doesn’t disappear, like he did, until there is justice for him,” said Eknaligoda, 59, in her home in Kottawa, a suburb southeast of the capital, Colombo, earlier this month .

“It’s not going to be easy,” she said, referring to the legal fight to hold Gotabaya Rajapaksa to account for alleged complicity in torture and killings. “But we still have a chance to move forward. We should not let it go.”

A ‘well-documented dossier’ of evidence

That’s the consensus among lawyers and human rights groups, which had doggedly worked to build a “very well-documented dossier” of evidence against Rajapaksa dating back to 1989, according to Yasmin Sooka, human rights lawyer and executive director of the South Africa-based International Truth and Justice Project (ITJP).

The group alleges the ultimate responsibility and chain of command for crimes committed by government forces during the civil war was in Rajapaksa’s hands, an accusation he denies.

“As long as he doesn’t have immunity, it does open up the gates and it does give hope to many of the victims,” ​​Sooka said.

On July 24, the ITJP filed a criminal complaint with the attorney general in Singapore, where Rajapaksa first fled, asking that he be arrested under that country’s Geneva Conventions Act. Their hope was that the bold president could be held accountable under universal jurisdiction — the idea that any nation’s courts can try people for alleged crimes against humanity committed elsewhere.

It has been used, although rarely, to prosecute war criminals who have escaped the countries where atrocities were documented. But Sooka said her organization is keenly aware that, for political reasons, many governments are “not really inclined” to pursue universal jurisdiction cases.

Still, she is optimistic there might be some legal movement in this instance, even though Rajapaksa has absconded to Thailand, where the law does not allow the universal jurisdiction argument for war crimes.

Major civil unrest continues in Sri Lanka after its president fled the country. Protesters are demanding he resign over an economic crisis. Amid the turmoil, the interim president brought in an overnight curfew and gave the military broad powers to bring stability.

Instead, the ITJP is leaning on several countries that have extradition agreements with Thailand — such as the United States, the United Kingdom and France — in the hopes one of those governments might be willing to request that Rajapaksa be extradited and face charges in their country .

In 2011, a United Nations panel found there were “credible allegations” of atrocities committed by both the Sri Lankan government forces and the Tamil Tigers, some of which amounted to war crimes or crimes against humanity.

The UN and other organizations documented torture, summary executions and sexual violence, as well as thousands of disappearances.

Earlier this year, another damning report from the UN’s High Commissioner on Human Rights called out the Sri Lankan government for “its unwillingness to recognize serious international crimes and pursue accountability.” The report went on to urge countries around the world to consider universal jurisdiction and targeted sanctions against alleged perpetrators.

“We should not lose hope” for accountability “at some point,” Sooka said, emphasizing what she sees as her group’s multi-pronged judicial strategy, which includes further legal action and a push to have countries slap sanctions on Rajapaksa’s assets.

“It’s also important that Gotabaya [Rajapaksa] has to hop from place to place…. it’s the insecurity of never knowing where he’s going to be safe.”

The hope that Rajapaksa might face cartoons somewhere is “not as far-fetched or far off as some people think,” according to Paikiasothy Saravanamuttu, executive director of the Colombo-based think-tank Center for Policy Alternatives. “But it’s certainly not something that’s going to happen in a hurry.”

Other lawsuits against Rajapaksa are in the works, including a refiling of a 2019 civil case in the US — under that country’s Torture Victims Protection Act — that the ITJP submitted on behalf of a handful of Sri Lankan torture victims.

That suit — for which Rajapaksa was served court papers in April 2019, in the parking lot of a Trader Joe’s grocery store in California — proved that he was “not invincible,” according to Sooka.

How Sri Lankans are coping with political and economic turmoil

CBC’s Salimah Shivji gives an inside look at how the political and economic unrest in Sri Lanka is hurting everyday people.

“Nobody had believed that this man, who had been called ‘The Terminator,’ would ever let himself be served with papers,” she said. “We were able to do that.”

And yet, a little more than half a year later, Rajapaksa was elected president of Sri Lanka and granted immunity from prosecution.

Further complicating the renewed push to hold Rajapaksa to account are rumors he is preparing to return to Sri Lanka, where experts believe it’s unlikely he would face consequences for alleged war crimes. The United Nations has repeatedly condemned Sri Lanka’s internal accountability mechanisms.

As well, Rajapaksa’s political allies are still in power in Sri Lanka, where a crippling economic crisis has largely been blamed on the former president’s fiscal mismanagement.

“We have to look beyond Sri Lanka for justice,” said Sandya Eknaligoda, glancing at the faded photos of her husband in her living room, set up as a permanent shrine to the man she last saw 12½ years ago.

While she longs for a more concerted international effort to pursue the former president, she was muted when asked if she believed Rajapaksa would face cartoons inside her country, where she has fought for years to have her husband’s abduction exposed and explained.

“We must keep one thing in mind: Politicians in Sri Lanka will always protect each other,” Eknaligoda said. “What happens here is still very much what the Rajapaksas want.”