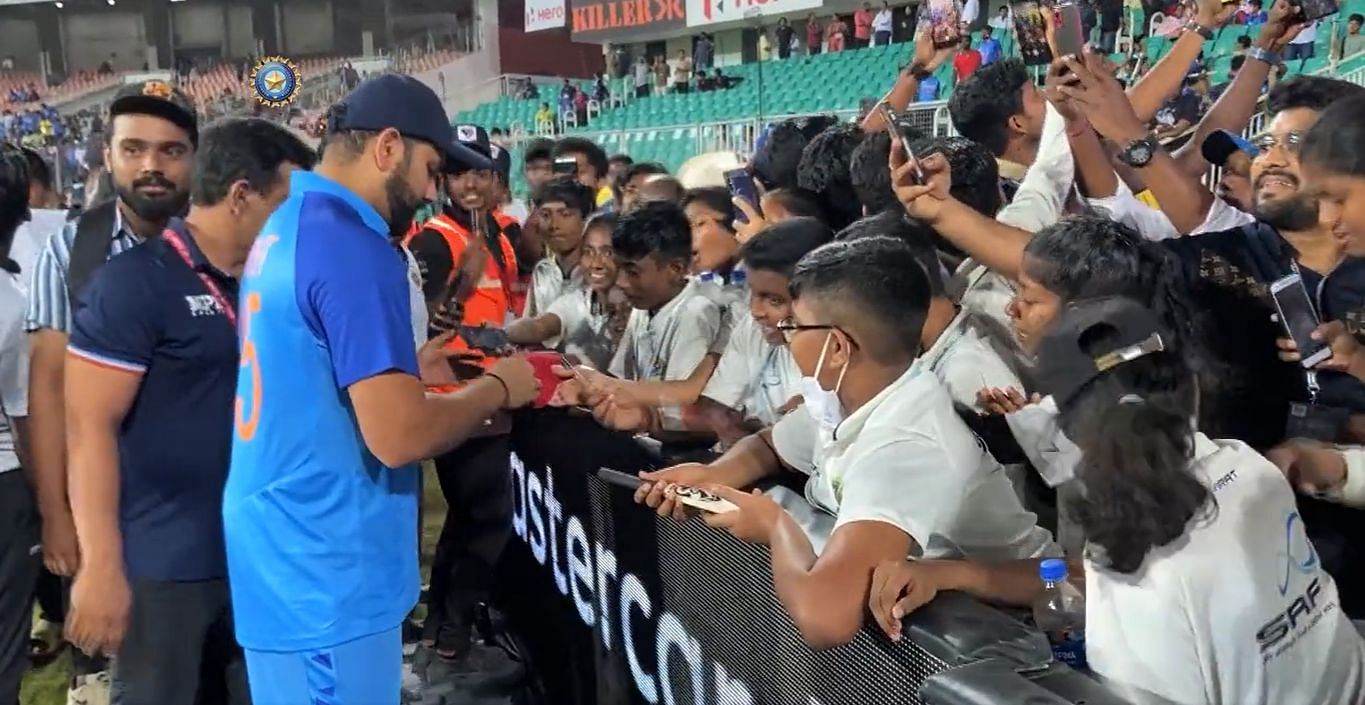 Team India skipper Rohit Sharma gave autographs to a number of fans at the Greenfield International Stadium in Thiruvananthapuram after his side’s triumph in the 1st T20I against South Africa on Wednesday (September 28).

The Men in Blue trounced the Proteas by eight wickets in the opening T20I to take a 1-0 lead in the three-match series. Bowling first after winning the toss, Team India restricted South Africa to 106 for 8. The batters then chased down the target in 16.4 overs.

Following the clinical victory, Rohit decided to make some fans’ day even more memorable. He proceeded towards one of the stands and went on an autograph-signing spree. The BCCI shared a video of the Hitman’s gesture for the crowd with the caption:

“Just a little something for the fans here in Thiruvananthapuram, courtesy Captain @ImRo45! #TeamIndia | #INDvSA.”

As the margin of victory indicates, Team India were completely dominant in the Thiruvananthapuram T20I. Arshdeep Singh (3/32) claimed three wickets in his first over, while Deepak Chahar picked up two as the visitors crumbled to 9 for 5 in 2.3 overs. Keshav Maharaj’s defiant 41 ensured South Africa reached at least three figures.

In the chase of 107, India lost skipper Rohit for a duck to a beauty of a delivery from Kagiso Rabada. Anrich Nortje then sent back Virat Kohli for 3. However, Suryakumar Yadav (50* off 33) and KL Rahul (51* off 56) took the Men in Blue home without any further damage. The duo added an unbroken 93 for the third wicket.

Speaking after the game, Rohit admitted that the surface was a tricky one to play on, but asserted that it was a very good learning experience as well. At the post-match presentation ceremony, he commented:

“The wicket was tricky. You learn a lot playing such a game. You understand what the team needs to do in tough conditions. It was nice to play a game like that. We knew the bowlers will get something seeing grass on the pitch, but we didn’t expect help for the full 20 overs.”

The 35-year-old added the pitch was slightly damp, and because of that, South Africa were not out of the game despite posting the small score. He added:

“It was still damp. Both teams were in the contest and the team that played better won the game. We started well, got five wickets in quick time and that was the turning point. It was a perfect showcase of how to bowl when there is help for the pacers.”

Sharing his thoughts on the chase, he concluded

“We knew it wasn’t going to be easy. Got to respect the conditions. Lost two wickets and that partnership between KL and Surya got us home.”

The 2nd T20I of the three-match series will be played at the Barsapara Cricket Stadium in Guwahati on Sunday (October 2).