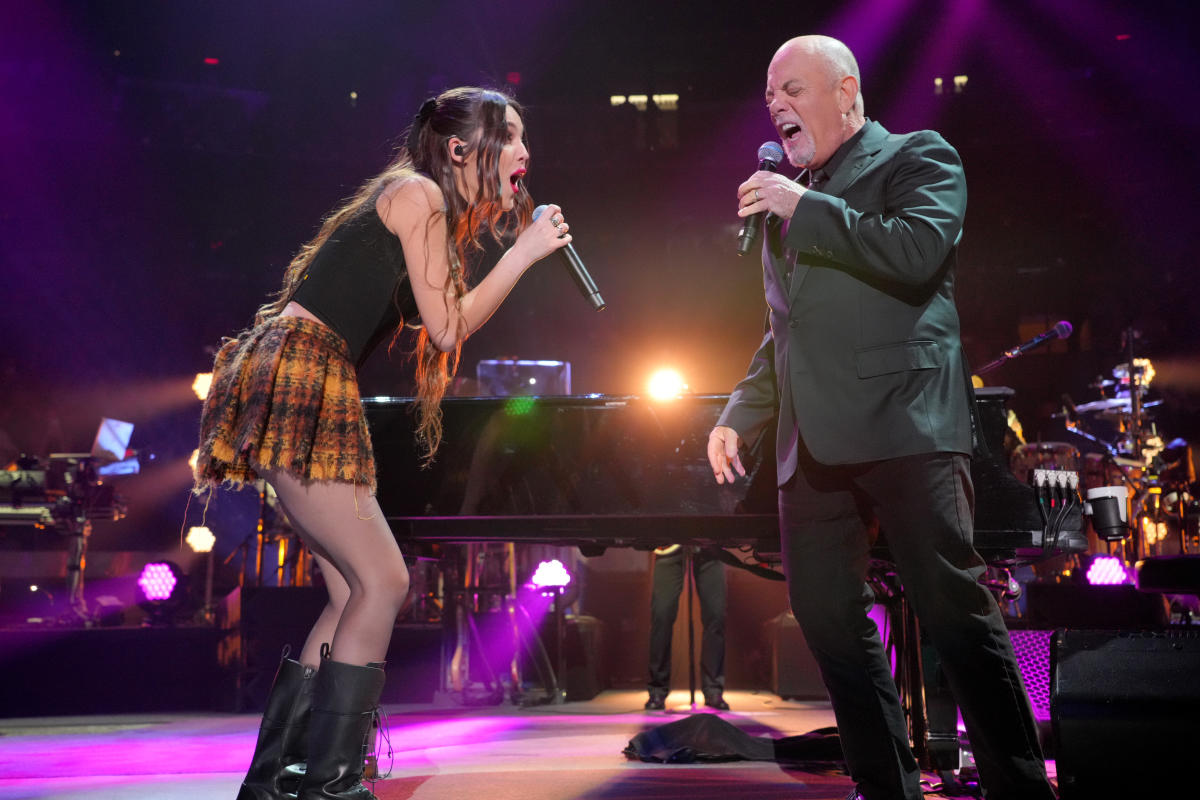 a little over a year after introducing teens across America to the existence of a singer named Billy Joel and his 1983 tune “Uptown Girl” thanks to her hit “Deja Vu,” Olivia Rodrigo came onstage at Joel’s Madison Square Garden show on Wednesday evening to finally sing both songs with the man himself.

The first sign that Rodrigo was in the house took place midway through the night when the band quietly started playing the intro to “Deja Vu,” though few people in the arena seemed to recognize what was happening. “I’m going to bring up a young musician,” Joel said. “She’s a triple Grammy winner. She won the Billboard 2022 Woman of the Year award. She she’s got the American Music Award. She’s got all kinds of awards. She’s very talented. I like her music, and so do my kids. She’s very talented. Please say hello to Olivia Rodrigo.”

‘This Made Our Day’: Veruca Salt Reacts to Olivia Rodrigo’s Cover of ‘Seether’

The young members of the crowd squealed with delight as she walked out, while their parents tried to figure what out what was happening. “Hey guys,” she said, facing perhaps the most subdued crowd of her brief career as a touring artist. “Thank you so much for inviting me, Billy. I’m such a huge fan. I couldn’t have written this next song without you, so thank you.”

A big smile came across Joel’s face when she got to the “I’ll bet that she knows Billy Joel/’Cause you played her ‘Uptown Girl’” part of the song and pointed directly at him. And when it ended, he grabbed a mic, gave her a hug, and said they were going to do “a song that was referred to in the last song.”

What followed the amazingly surreal sight of Joel and Rodrigo standing side-by-side and playfully trading verses on “Uptown Girl.” Rodrigo delivered the “And now ela she’s looking for a downtown man / That’s what I am” part and somehow managed to sell it. This moment felt somewhat inevitable when “Deja Vu” became a hit, but it was even more glorious than anyone could have imagined. “Thank you, Billy,” she said as they hugged at the end. “I love you.”

The surprise duet with Joel is only going to increase Joel’s standing with Gen Z audiences that turned his 1978 deep cut “Zanzibar” into a TikTok dance craze over the past year. If you think we’re joking, check out these 262,000 videos that use the same tiny snippet of his song. “I don’t even know what TikTok is,” he told a crowd last year. “But this is a thing.”

The Olivia Rodrigo portion was the highlight of an extremely joyful Billy Joel concert that veered between hits like “A Matter of Trust,” “Only The Good Die Young,” and “My Life” and fan favorites like “Don’t Ask Me Why ,” “The Entertainer,” and “An Innocent Man.” On the latter song, Joel hit the same stunning high notes as the original recording nearly 40 years ago somehow.

Joel’s monthly Madison Square Garden residency began as a little experiment back in 2014, but it’s now firmly established as one of the most reliably great rock shows anywhere on the planet. There’s something unique about every single gig, and even well-worn hits like “Piano Man” and “Scenes From an Italian Restaurant” somehow sound fresh and exciting when you’re signing them along with 20,000 other people.

And with all due respect to Harry Styles and his 15-night MSG residency, which is indeed quite impressive, Joel is at 82 months and counting. Harry has a long way to go before catching up.