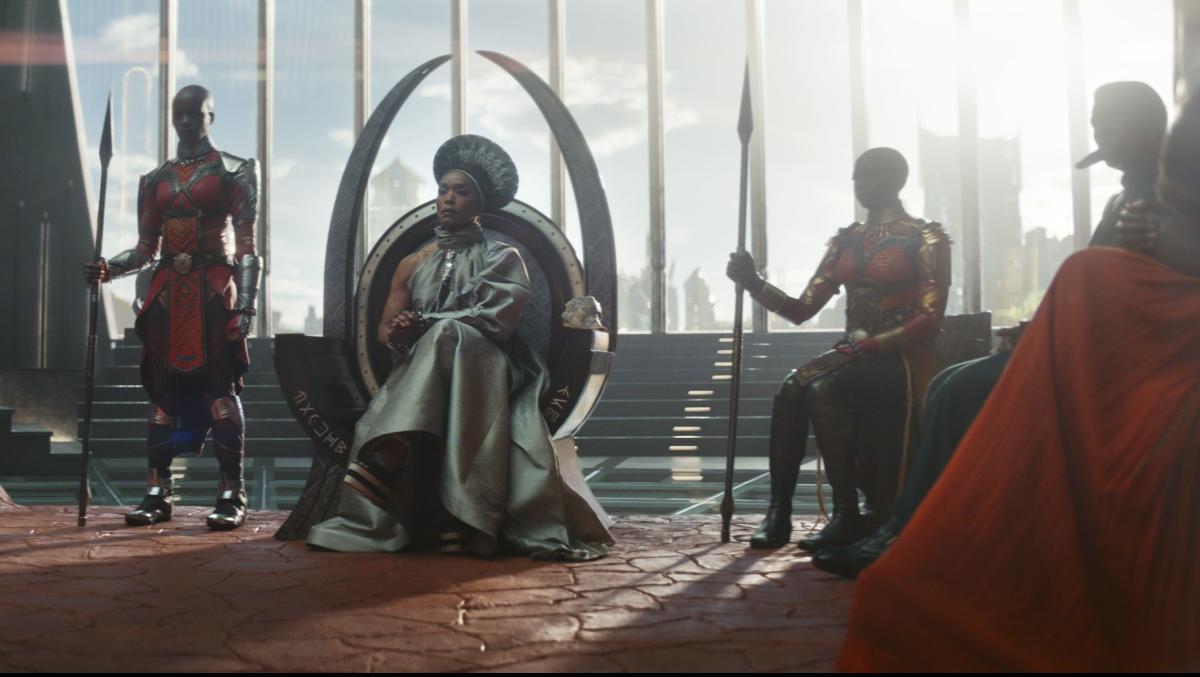 Disney and Marvel today unveiled new footage from the highly-anticipated sequel, Black Panther: Wakanda Forever, which is slated for release on November 11. It’s the final film in Phase Four of the MCU. The tease came during a D23 panel touting upcoming projects from Marvel Studios, Lucasfilm and 20th Century Studios.

The footage has Angela Bassett’s Ramonda in some sort of congressional hearing. The officials there want access to Wakanda’s Vibranium. She, of course, says no because it’s dangerous and because of the potential of the US getting it.

Cut to a special ops team attempting to sneak into Wakanda’s Vibranium processing facility in order to steal the substance. Wakanda’s women warriors, however, are onto them and Okoye (Danai Gurira) and her crew mop the floor with the would-be thieves.

Castmembers Angela Bassett and Winson Duke were on hand to add their perspectives.

“It was a great experience with the entire cast,” said Bassett. “It takes a lot of magic behind to make this come together, and of course our spirited leader, Ryan, and Chadwick, who was with us every step of the way. We had to meet his level of excellence from him.”

“We are back. I am excited for everyone to see Wakanda after the Infinity Wars, after the Endgame, after everything that has happened so far,” he said. “Everything is bigger is better, and new. I’m not the most technologically inclined character but the tech is fun, its different, its nothing you have seen.”

The original 2018 film directed by Ryan Coogler follows T’Challa (Chadwick Boseman), heir to the hidden but advanced kingdom of Wakanda, who must step forward to lead his people into a new future and confront a challenger from his country’s past. The pic written by Coogler and Joe Robert Cole was a historic success for Disney, grossing over $1.3B worldwide and landing seven Oscar nominations, winning in the categories of Best Original Score, Costune Design and Production Design. Coming in as the highest-grossing film ever directed by a Black filmmaker, the ninth-highest-grossing film of all time and the third-highest-grossing film in the US and Canada at the time of its release, Black Panther was also the first superhero film to receive a Best Picture nomination, and the first MCU title to dominate in multiple categories. The statuettes it claimed marked a watershed moment for representation in Hollywood, both on camera and behind the scenes, with Ruth E. Carter becoming the first Black person to win the Costume Design prize, and Hannah Beachler making history as the first Black victor in Production Design.

While talk of the Black Panther sequel circulated just about as soon as the original film was released, plans for its story shifted, following Boseman’s passing of colon cancer in August of 2020, aged 43. The new film, looking to pay tribute to the beloved actor, will watch as the nation of Wakanda is pitted against intervening world powers as they mourn the loss of their king.

Ryan Coogler returned as director, once again working from his and Cole’s script. Cast members coming back for the sequel include Danai Gurira, Lupita Nyong’o, Letitia Wright, Martin Freeman, Angela Bassett and Winston Duke, with Judas and the Black Messiah‘s Dominique Thorne among those joining the ensemble this time around.

production on Black Panther: Wakanda Forever wrapped in March, with the film’s stunning first trailer being unveiled at Comic-Con 2022. Boseman was honored yesterday at D23’s Disney Legends induction ceremony, with his brother Derrick Boseman speaking on his behalf. “I wish he was here to receive [this award],” lamented Boseman’s brother. “Him not being here has been a point of immense pain for my whole family.”

The D23 exposition runs at the Anaheim Convention Center through September 11th.