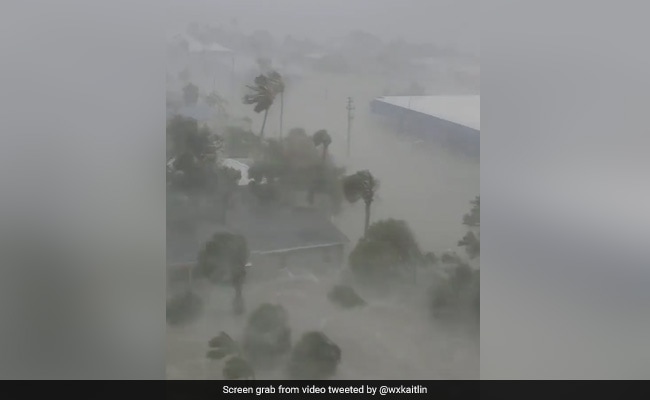 Picture shows the massive destruction of houses and land caused by the hurricane.

Intense winds and downpours from Hurricane Ian, which made landfall on Florida’s southwest coast on Wednesday, have produced “catastrophic” devastation and flooding.

Houses are destroyed and some are floating away as Ian’s eyewall hammers southwest Florida. This is video from Fort Myers Beach, Florida off Estero Blvd by Loni Architects pic.twitter.com/6GqrxLRv9Q

The video has surfaced on the Internet showing the massive destruction of houses and land caused by the hurricane. The video shows houses submerged in water and trees breaking apart from strong winds and heavy rains in Fort Myers Beach, Florida.

The video was shared by a meteorologist from Charlotte, North Carolina named Kaitlin Wright on Twitter on Wednesday and has been credited to Loni Architects.

“Houses are destroyed and some are floating away as Ian’s eyewall hammers southwest Florida. This is video from Fort Myers Beach, Florida, off Estero Blvd by Loni Architects,” she wrote while sharing the post.

Since being shared, the video has crossed over 1.7 million views and 13,000 likes. More than 5,500 users have reshared the video on Twitter. Numerous users have prayed for the situation to get better in the comment section of the post.

“Most of the video was from hours ago of so user that area. Send the bad path it had gotten written,” one

According to Yahoo Newsafter Hurricane Ian made landfall and began to lash the state’s west coast with strong winds and flooding on Wednesday afternoon, more than 1 million homes and businesses in southwest Florida were left without electricity.

Prior to the “very hazardous” category four hurricane making landfall in Lee County, Florida, Naples saw 150 mph gusts and a storm surge that was more than seven feet high.

The outlet further said that a warning has been issued by the National Hurricane Center that the storm surges in the counties of Lee and Charlotte could reach heights of up to 18 feet.