Victoria Beckham has proven she’s no better than the rest of us with her latest drop of teen throwbacks.

Joining in the hilarious ‘Teenage Dirtbag’ trend on TikTokwhich sees users share photos from their adolescence, Posh decided to share a few of hers.

With no caption, other than a peace sign, Beckham delighted fans with the throwbacks, which included a fantastic photo of her showing off her naturally curly locks.

READ MORE: Woman reveals her ‘nightmare neighbour’ has been ‘harassing’ her for months

Another saw Beckham sporting a more ‘Spice Girl’ kind of look – a micro silver boob tube and latex purple pants with cut-outs on her hips. Those were the days.

Fans have swarmed the comments on the video, which now has over three million views, with plenty of calling the “iconic” photos.

“You haven’t aged at all!!” one fan praised.

“Stunning then stunning now,” shared another.

In another rare photo, Beckham smiles wearing a white oversized jumper and a daggy cap – definitely not a look she’d be caught dead wearing these days.

Plenty of celebrity TikTok users have tried the trend, including none other than Paris Hilton.

She also shared a collection of incredibly iconic photos from her younger years, some of which were quite a blast from the past.

Hilton’s collection of photos included her partner-in-crime, Nicole Richie, of course, as well as some of her most signature looks.

Pink-on-pink, mini-skirts, sparkles and choker necklaces were all pictured in her TikTok snaps. 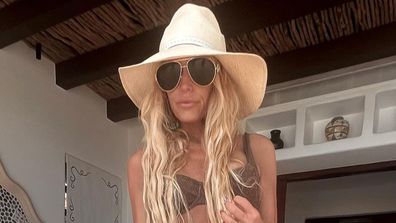