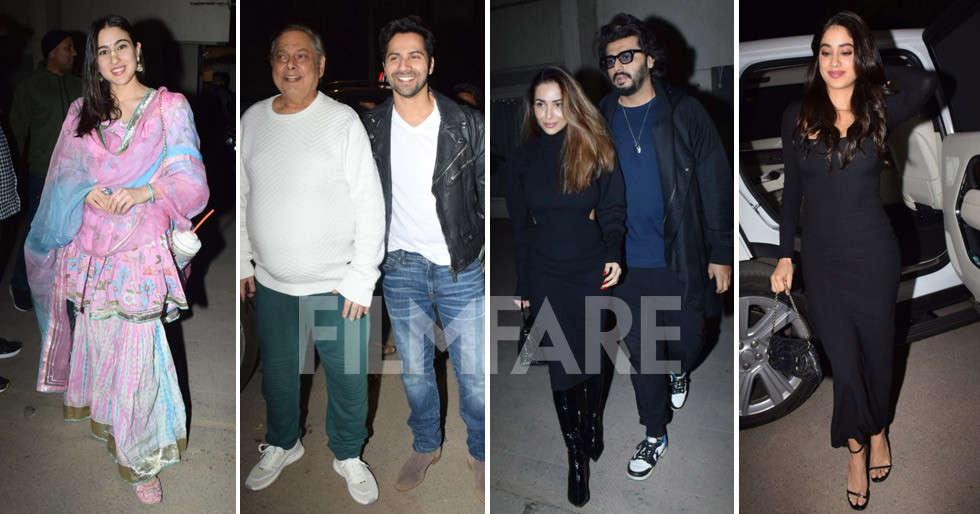 There is no doubt that Varun Dhawan and Natasha Dalal make one of the cutest couples in the industry. In 2021, the Bhediya actor married his childhood beau designer Natasha Dalal. In honor of their anniversary, the couple hosted a grand bash at their Mumbai residence on Tuesday.

For this, they invited their friends and colleagues from the industry to be a part of the special day. Among those who attended the bash were Anil Kapoor, Sara Ali Khan, Janhvi Kapoor, Karan Johar, Manish Malhotra, Malaika Arora, Arjun Kapoor and others. It was a night to remember for the couple as all the celebs arrived dressed in stylish suits for the special occasion.
Anil Kapoor looked dapper in his all-black ensemble. The actor opted for a black sweater and black pants along with black shoes and completed his whole look with shades. The actor also clicked a picture with his Jug Jugg Jeeyo co-star Varun Dhawan where Varun can be seen in a casual outfit.
Meanwhile, Sara Ali Khan arrived at her Hero No.1 co-star’s anniversary in ethnic attire where she opted for a pink, white and blue colored sharara set adorned in intricate embroidery and silver drop patti borders. She accessorized her outfit with juttis, jhumkis and a quirky embroidered bag. She completed her look with minimal makeup and open tresses.
Janhvi Kapoor made a stylish entry to the anniversary bash in a black midi dress. To highlight her enviable curves, her outfit features full-length sleeves, a scoop neckline, and a figure-hugging fit. She paired the dress with strappy black heels, a chained mini-shoulder bag, and gold hoops. Her look was completed with wavy tresses, pink lips, and winged eyeliner.
While Bollywood’s famous couple Malaika Arora and Arjun Kapoor arrived together for the party. The duo was spotted in a twinning outfit where Malaika opted for a black turtle-neck midi dress with a cut-out feature on the waist and she paired this ensemble with black boots and minimal makeup. Arjun Kapoor wore a black jacket that he paired with a navy blue t-shirt and black pants. He completed his look with black shades and black and white sports shoes.

Meanwhile, Manish Malhotra and Karan Johar were also spotted by the paparazzi attending the party.