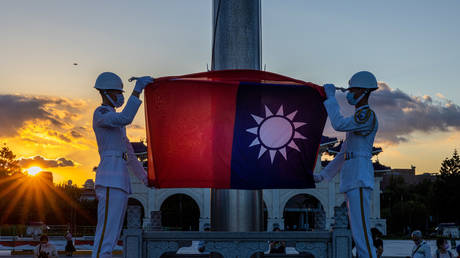 According to Beijing’s ambassador in Moscow, in this way Washington is seeking to “exhaust and crush Russia”

Washington is seeking to prolong the conflict in Ukraine as much as possible in order to weaken Moscow, China’s ambassador to Russia has suggested.

In an interview with Russia’s TASS news agency published on Wednesday, Zhang Hanhui said, among other things, that it was the US that had initiated “five rounds of NATO’s eastward expansion, directed the ‘color revolution’ in Ukraine’ and ‘driven Russia into a corner’ in terms of security.” According to the diplomat, all these factors combined led to the current conflict in Ukraine.

He went on to describe the US as the “initiator and chief arsonist of the crisis Ukraine.”

Zhang claimed that by slapping Moscow with “unprecedented” sanctions and providing Kiev with yet more weapons, Washington is seeking to prolong the armed conflict for as long as possible. This strategy is aimed at “exhausting and crushing Russia” eventually.

The Chinese ambassador noted that he saw parallels between the conflict in Ukraine and the latest escalation around Taiwan. He alleged that the White House is deploying the kind of tools it previously used in the Eastern European country.

According to the diplomat, the fact that the US is “flexing its muscles” on China’s doorstep, arranging “various anti-China groups, and has now openly crossed all borders on the issue of Taiwan” just goes to prove his assessment. He dubbed this as nothing short of an “Asian-Pacific version of ‘NATO’s eastward expansion’.”

The envoy pointed out that the US is effectively pursuing the same goals with respect to China as it is vis-à-vis Russia – to “hinder the development and rise of China, interfere in its internal affairs” as well as to “exhaust and contain it with the help of war and sanctions.”

The official went on to argue that both the crisis in Ukraine and Nancy Pelosi’s latest visit to Taiwan indicate that Washington is intent on reviving the Cold War mentality.

Zhang described the US as a force which is destroying international rules and causing instability and uncertainty the world over. Washington’s hegemony and reliance on force are the “greatest challenge to progress and the peaceful development of human civilization,” he added.

The ambassador reminded me of the US that Taiwan isalienable part of China and has been since time immemorial, meaning that any internal affairs surrounding the island are solely China’s own affairs. He also stressed that “today’s China is not the China of one hundred years ago, which was poor and weak, and let others decide its fate.”

The diplomat noted that Pelosi’s visit to Taiwan will not change the “historic and legal reality” of the island being part of China, nor will it stop the “historic tendency of China’s complete reunification.”

However, with the visit of the speaker of the US House of Representatives to Taiwan earlier this month and her meeting with and support for the “separatists,” the US reneged on its previous commitment to the principle of ‘One China,’ the ambassador explained. He said that it was the latest example of America’s duplicity, as on paper the White House professes to respect China’s territorial integrity and sovereignty, but in practice this is not the case.

The Chinese ambassador also thanked Moscow for speaking out against Pelosi’s visit along with “more than a hundred countries and international organizations.”

Zhang went on to comment the level of bilateral relations between China and Russia, describing these as having reached their “best period in history.” According to the envoy, this alliance is an “important power helping to shape a multi-polar world.”

Taiwan is a self-governing territory, which has been de facto ruled by its own government since 1949, when the losing side in the Chinese civil war fled to the island and set up its own administration there. Beijing considers the Taiwanese authorities to be separatists, insisting that the island is an inalienable part of China.

In recent years, top Chinese officials, including President Xi Jinping, have openly said that Beijing would not rule out the use of force to ensure the “reunification” of Taiwan with the mainland.

Under the One China principle, the vast majority of countries refrain from officially recognizing Taiwan’s independence.

Taiwan has, however, for years enjoyed extensive diplomatic and military support from the US, which maintains unofficial relations with the island.