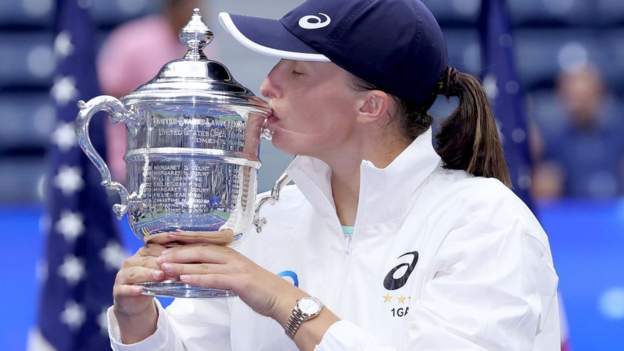 World number one Iga Swiatek capped a dominant season by beating Tunisian fifth seed Ons Jabeur at the US Open to win her second major title of 2022.

After a one-sided first set, 28-year-old Jabeur settled midway through the second but it was not enough to stop Swiatek clinching a third major title.

Swiatek’s previous two wins both came on the clay at the French Open.

Jabeur also lost in the Wimbledon final in July and her wait for one of the sport’s four most prestigious titles continues.

The Flushing Meadows final was a meeting between the two leading players on the WTA Tour this year, but Swiatek demonstrated why there is such a big gap between her and the rest with a largely dominant performance.

Swiatek remains the world number one, and would have done even if she had lost, with Jabeur moving up to a joint career-high ranking of second after reaching the final.

Following the retirement of Australian world number one Ashleigh Barty in March, Swiatek has seized her opportunity to take over as the tour’s dominant player.

Earlier this year, she put together a 37-match winning streak that enabled her to claim six titles in a row – including the French Open at Roland Garros.

After going through an understandable dip which resulted in the streak ending in the Wimbledon fourth round, Swiatek has slowly reasserted her authority in New York.

Her best performance was saved for the final.

“I wasn’t expecting a lot. Before this tournament it was such a challenging time,” said Swiatek, who admitted her dislike for the lighter balls used by the women at the US Open.

Swiatek had won her nine previous finals without dropping a set – also including her maiden major win at the 2020 French Open – and set the platform for another victory with a confident start.

But she also needed to show resilience at times in the second set.

After being unable to convert either of two break points for a 4-0 lead, Swiatek suddenly found herself level at 4-4 and saved three break points to prevent Jabeur going 5-4 ahead.

Scoreboard pressure started to tell on Jabeur in the 12th game, with the Tunisian falling 30-0 behind and handing over a first championship point with a loose forehand.

Swiatek changed her racquet before sending a backhand long to miss the chance but she regained composure in the tie-break and sealed victory on her second championship point when Jabeur hit a forehand long.

The pair shared a warm embrace in the middle of the court before Swiatek, who is the first woman since Serena Williams in 2014 to win seven titles in a season, celebrated in front of her team.

By contrast, Jabeur looked emotional as she sat with her head in her hands as she processed a second successive defeat in a final Grand Slam.

Going into the match, Jabeur said she felt she had learned lessons from July’s defeat at Wimbledon to Kazakhstan’s Elena Rybakina.

There, she made a fast start before fading. Here, she paid the price for a slow start.

Jabeur only landed 48% of her first serves in the first set and Swiatek – who has won more games than anyone else this year – pounced with relentless returning to clinch the opener after just 30 minutes.

While Jabeur’s serving improved in the second set, the number of unforced errors mounted and she was unable to fully capitalize on Swiatek’s slight dip.

“Iga didn’t make it easy for me. She deserved to win,” said Jabeur, who was the first African woman to reach US Open final in the Open era.

“Winning or losing is part of tennis. I struggled to win my first WTA title. It took me time. So I believe this [winning a major] will take me time.

“The most important thing is accepting it, learning from the finals that I lost.

“Definitely I’m not someone that going to give up. I’m sure I’m going to be in the final again. I will try my best to win it.”

These courts are a little on the quick side for her, and the balls a little too light. The 21-year-old was also trying to rouse herself after a sapping 37-match winning streak came to an end at Wimbledon.

But against Ons Jabeur, she underlined her pre-eminence in the women’s game. No-one has won seven titles in the same year on the women’s side since Serena Williams eight years ago.

Jabeur, though, is inching closer – and it is easy to forget how much progress she has made this year.

The world number 10 at the start of the year, the Tunisian will return to second in the rankings. Along the way she has won the prestigious WTA event in Madrid and now reached back-to-back Grand Slam finals.