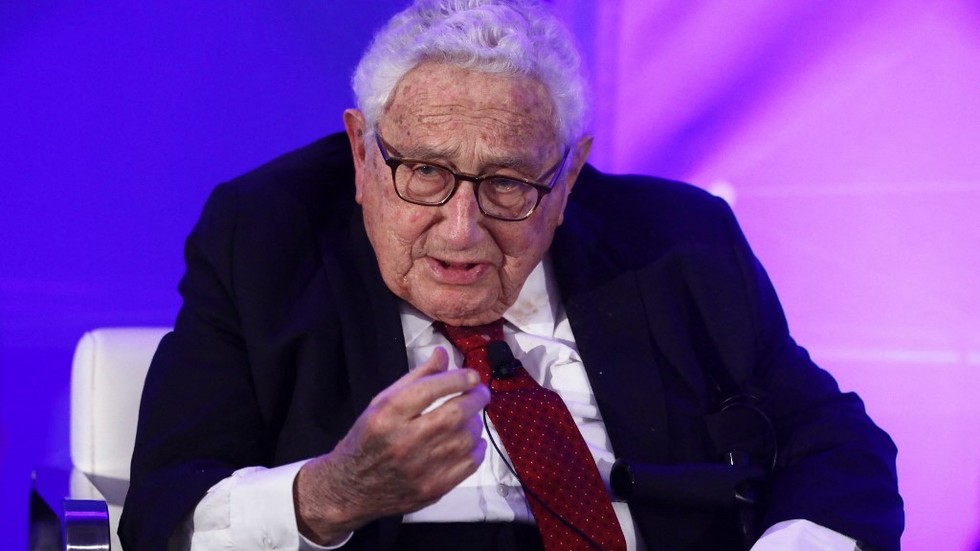 Former US Secretary of State Henry Kissinger has told the Wall Street Journal that Washington has rejected traditional diplomacy, and in the absence of a great leader, has driven the world to the precipice of war over Ukraine and Taiwan.

Kissinger previously courted controversy for suggesting that Kiev abandon some of its territorial claims to end the conflict with Russia.

“We are at the edge of war with Russia and China on issues which we partly created, without any concept of how this is going to end or what it’s supposed to lead to,” Kissinger said in the interview, published on Saturday.

Kissinger, now 99 years old, elaborated on the West’s role in the Ukraine conflict in a recent book profiling prominent post-WWII leaders. He described Russia’s decision to send troops into the country in February as motivated by its own security, as having Ukraine join NATO would move the alliance’s weapons to within 300 miles (480km) of Moscow. Conversely, having Ukraine in its entirety fall under Russian influence would do little to “calm historic European fears of Russian domination.”


Diplomats in Kiev and Washington should have balanced these concerns, he wrote, describing the current conflict in Ukraine as “an outgrowth of a failed strategic dialogue.” Speaking to the Wall Street Journal a month after the book’s publication, Kissinger stood by his insistence that the West should have taken Russian President Vladimir Putin’s security demands seriously, and made it clear that Ukraine would not be accepted into NATO alliance.

In the runup to its military operation in Ukraine, Russia presented the US and NATO with written outlines of its security concerns, which were rejected by both receiving parties.

Kissinger, who in the late 1960s and early 1970s held extensive negotiations with Vietnamese communists even as the US military waged war against them, said that modern American leaders tend to view diplomacy as having “personal relationships with the adversary,” and in words paraphrased by the Wall Street Journal, “tend to view negotiations in missionary, rather than psychological terms, seeking to convert or condemn their interlocutors rather than to penetrate their thinking.”

Instead, Kissinger argued that the US should seek “balance” between itself, Russia, and China.

This term refers to “a kind of balance of power, with an acceptance of the legitimacy of sometimes opposing values,” Kissinger explained. “Because if you believe that the final outcome of your effort has to be the imposition of your values, then I think is not possible.”


Under President Richard Nixon, Kissinger orchestrated the US’ diplomatic outreach to China in the 1970s, a move aimed at prying Beijing away from Moscow and shifting the balance of power in the world away from the communist East.

Under President Joe Biden, the US has watched as China and Russia deepened their trade and diplomatic ties. US policy on Taiwan – with Joe Biden publicly breaking with Washington’s Kissinger-era ambiguity on the island’s independence and House Speaker Nancy Pelosi enraging Beijing with a visit to Taipei earlier this month – has damaged further the US relationship with China and prompted a surge in military activity in the Taiwan Strait.

According to Kissinger, the US is no longer in a position to side with either Russia or China against the other. “All you can do is not to accelerate the tensions and to create options, and for that you have to have some purpose,” he said.

Kissinger is a prominent advocate of the realpolitik school of international relations, which puts the practical interests of nations ahead of ideological stances. His dispassionate view of foreign affairs has earned him enemies as well as praise, however.

Earlier this summer, Ukrainian President Vladimir Zelensky condemned Kissinger for suggesting that Kiev must accept a return to the “status quo ante” – relinquishing its territorial claims to Crimea and granting autonomy to the Donetsk and Lugansk People’s Republics – and seek a peace deal with Russia to prevent a third world war. Kissinger later clarified that these claims should only be temporarily shelved in order to negotiate an immediate ceasefire, but he was nevertheless labeled an enemy of Ukraine by Kiev and accused of “spreading narratives of Russian-fascist propaganda and blackmail.”