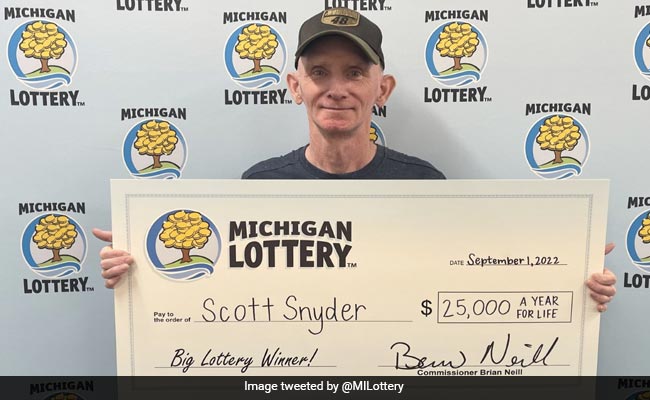 After entering the ‘Lucky For Life’ draw every day for several months with the same numbers, a Michigan man won the prize of $25,000 per year for life from the Michigan Lottery.

Scott Snyder, 55, of Zeeland, purchased the ‘Lucky For Life’ ticket from a gas station, and carried a very well-known set of numbers, he told Michigan Lottery authorities.

Mr Snyder informed Michigan Lottery authorities that the ticket had a sequence of numbers that were remarkably familiar to him.

“I started playing this special set of numbers in February, and I have played them every day since. I was checking some tickets at the store and got a message to visit a lottery office when I scanned one of them. I scanned it again and got the same message, so I told the clerk I must have won big,” said Snyder.

“The clerk told me they had recently sold $25,000 a year for life prize, and he printed off the winning numbers so that I could check my ticket. When I realized that I was the big winner, I tried not to get too excited at first because it didn’t seem real. I’m still having a hard time believing this is real!” he added.

Mr Snyder went to lottery headquarters to collect his substantial award. Instead of receiving annuity payments of $25,000 for 20 years (or for the rest of his life), he opted to take his winnings as a one-time, lump-sum payout of $390,000. He intends to purchase a house with his profits from it.