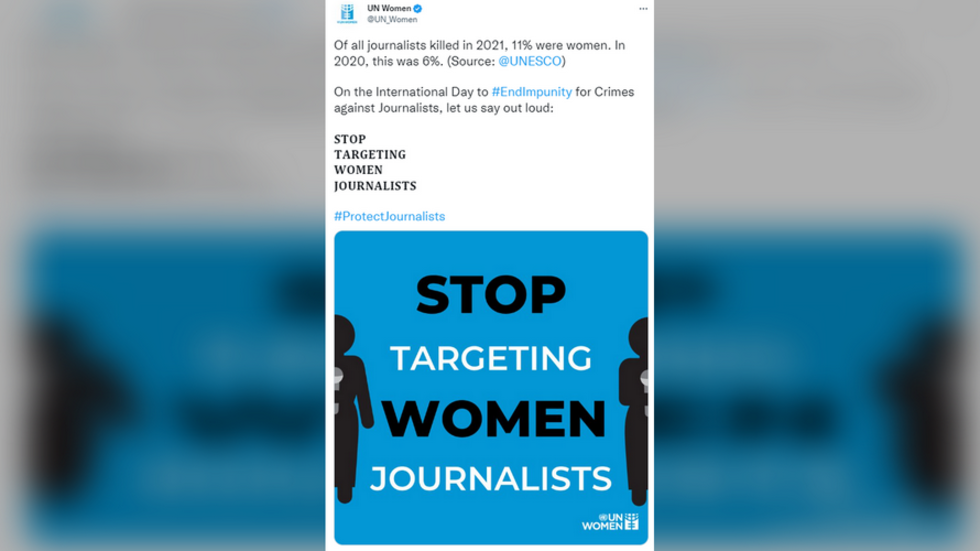 While 89% of reporters killed last year were men, the UN’s entity for gender equality wants its followers to focus on the other 11%

The United Nations’ entity for gender equality was widely mocked for a tweet drawing attention to the fact that 11% of journalists murdered in 2021 were women. As the organization demanded that criminals “stop targeting women journalists,” commenters asked what UN Women thought of the other 89%.

Out of all the journalists killed worldwide in 2021, 11% were women, up from 6% in 2020, the UN’s body for “gender equality and women’s empowerment” wrote in a tweet on Wednesday, citing figures from UNESCO.

“On the International Day to End Impunity for Crimes against Journalists, let us say out loud: STOP TARGETING WOMEN JOURNALISTS,” the organization continued.

“So 89-94% of journalists killed are men, why would we make a special plea to stop targeting women?” Washington Post columnist Megan McArdle responded. Writer Noah Smith described the tweet as essentially saying “please target only the male journalists, thanks.”

“Are they calling for gender equality here?” journalist Luke Rudkowski askedwhile podcaster Danny Polishchuk joked that he would “not rest until 100% of murdered journalists are male!”

Around 40% of journalists are women, according to figures from 12 countries compiled by Reuters and Oxford University. This means that statistically, female journalists are far less likely to die on the job than their male counterparts, who despite making up 60% of the workforce, account for nearly 90% of deaths.