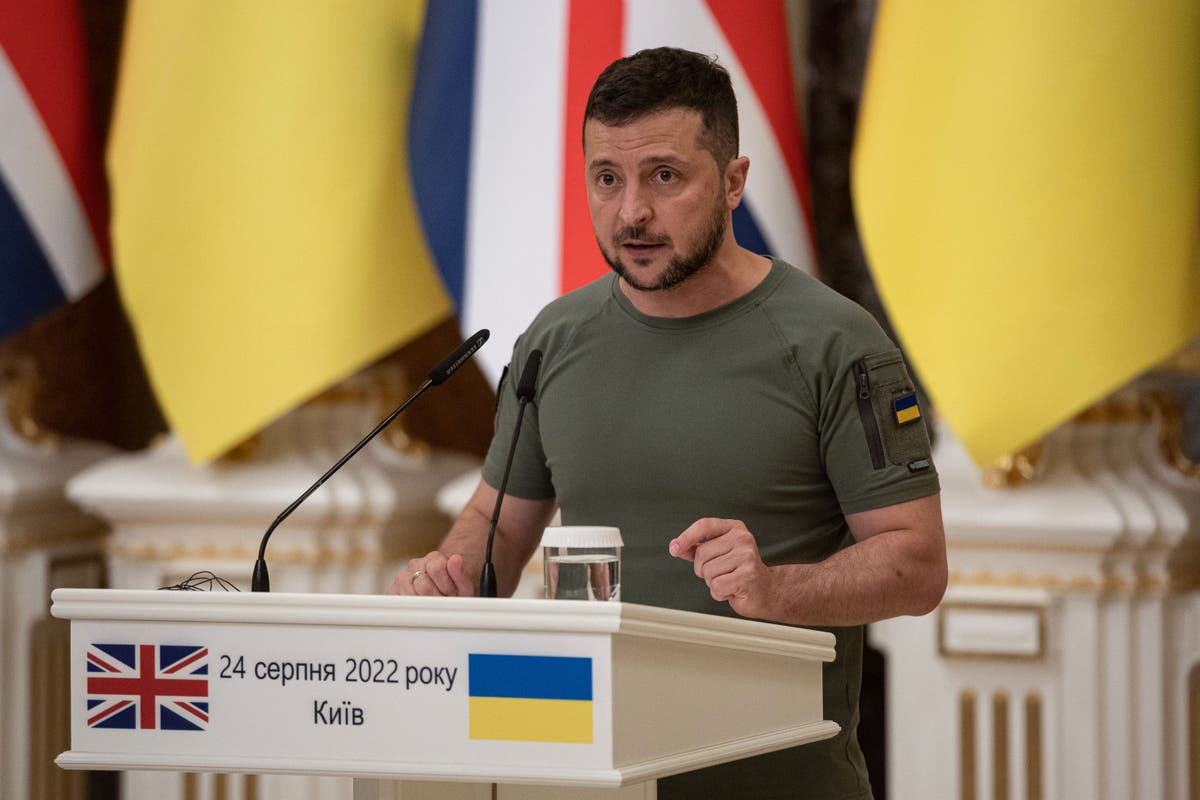 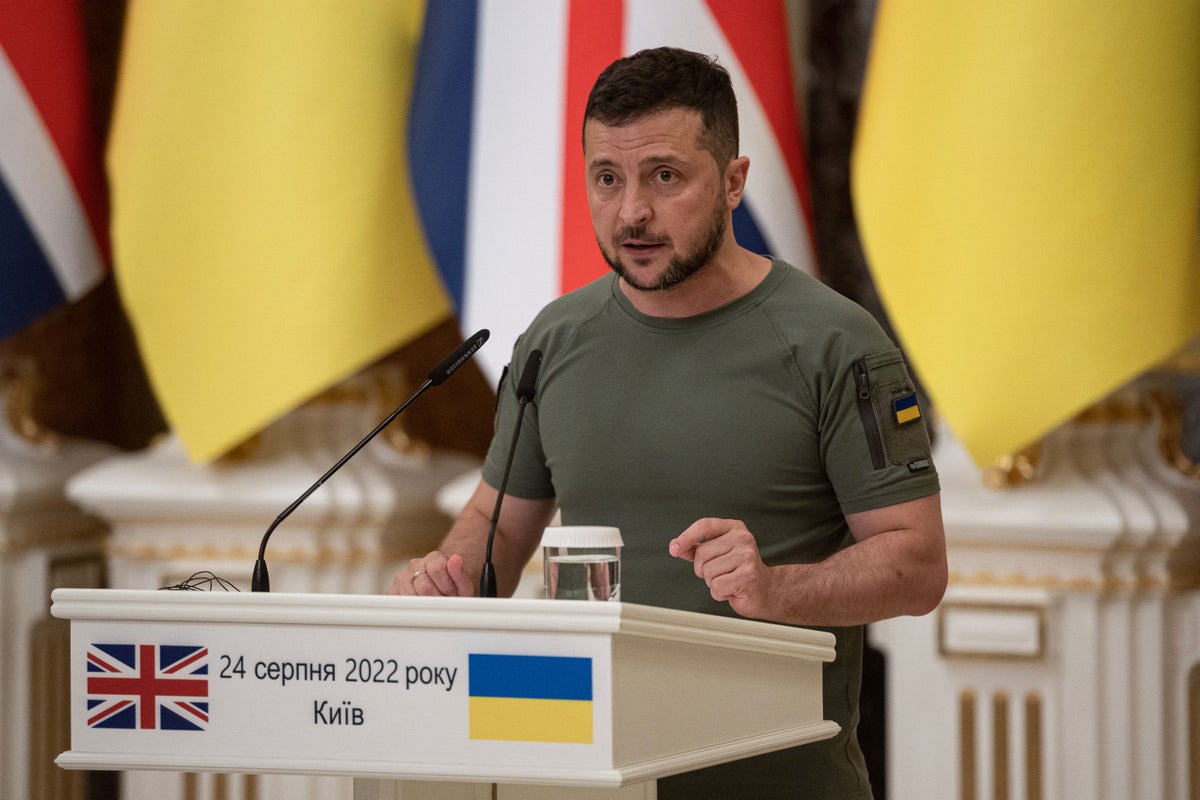 Ukrainian president Volodymyr Zelensky said the world narrowly avoided a nuclear catastrophe as electricity to the Zaporizhzhia power plant was cut for hours due to Russian shelling in the area.

The Russian shelling on Thursday sparked fires in the ash pits of a nearby coal power station that disconnected the reactor complex from the power grid, said Mr Zelensky in his evening address.

Back-up diesel generators ensured power supply that is vital for cooling and safety systems at the plant, he said, adding: “If our station staff had not reacted after the blackout, then we would have already been forced to overcome the consequences of a radiation accident.

“Russia has put Ukraine and all Europeans in a situation one step away from a radiation disaster.”

Meanwhile, Vladimir Putin has signed a decree to expand the Russian army by 137,000 troops, amid reports from Ukraine and its allies that the Kremlin’s forces have suffered severe casualties over the past six months.

It is currently unclear whether the additional soldiers, who will join the Russian army from January, will be conscripts or volunteers.

The UK’s Ministry of Defense (MoD) has rejected Russia’s claim to be deliberately slowing the pace of its war in Ukraine to protect civilians, accusing Vladimir Putin of likely firing at least six generals over the invasion’s slow progress.

On Wednesday, Russian defense minister Sergei Shoihu told a meeting of the Shanghai Cooperation Organization – including China, India and Pakistan – that the country was “deliberately” slowing its invasion to reduce civilian casualties.

But on Friday, the MoD claimed this was “almost certainly deliberately misinformation”, adding: “Russia’s offensive has stalled because of poor Russian military performance and fierce Ukrainian resistance. Under Shoigu’s orders, the forces operating in Ukraine have repeatedly missed planned operational timelines.

“It is highly likely that Shoigu and President Putin have fired at least six generals for not advancing quickly enough.”

Citing the recent attack on a railway station in Chaplyne – claimed by Ukraine to have killed 25 civilians – the ministry said: “This highlights Russia’s willingness to cause collateral damage when it perceives there is military advantage in launching missile or artillery strikes.”

Turkey, Finland and Sweden to meet over Nato bids

Officials from Turkey, Finland and Sweden are expected to meet in Finland today to discuss security concerns raised by Turkey as a precondition for allowing the two Nordic countries to join Nato.

Finland’s foreign minister Pekka Haavisto previously said that the first meeting would aim to establish contacts and set goals for cooperation that the three countries agreed to by signing a memorandum of understanding at the alliance’s June summit in Madrid.

Ankara had threatened to veto the two historic Nato bids, launched in the wake of Vladimir Putin’s invasion of Ukraine, expressing anger towards the Nordic nations over arms embargoes and their support for Kurdish groups deemed terrorists by Turkey.

Turkish foreign minister Mevlut Cavusoglu has since demanded Sweden and Finland extradite suspects Turkey seeks over terrorism-related charges, while the Nordic countries argue they did not agree to any specific extraditions by signing the memorandum.

In his nightly video address, Volodymyr Zelensky said Kyiv was doing everything possible to prevent an emergency scenario at Zaporizhzhia, “but it depends not only on our state”, with international pressure key to forcing Russia to withdraw from the power plant.

The International Atomic Energy Agency (IAEA) and other international organizations “must act much more quickly, because every minute that the Russian military remain at the nuclear plant there is a risk of a global radiation disaster”, Mr Zelensky was quoted as saying.

IAEA officials are “very, very close” to being able to visit Zaporizhzhia, the agency’s director general Rafael Grossi has said.

Paul Bracken, a national security expert and professor at the Yale School of Management, told Reuters that a main concern over the Zaporizhzhia nuclear plant is that artillery shells or missiles could puncture the reactor walls and spread radiation across potentially a large area – much like the 1986 accident involving the Chornobyl reactor.

A failure at the Zaporizhzhia plant could “kill hundreds or thousands of people, and damage environmentally a far larger area reaching into Europe,” Prof Bracken said.

“Russian Roulette is a good metaphor because the Russians are spinning the chamber of the revolver, threatening to blow out the brains of the reactor all over Europe,” added Prof Bracken.

As of 9am local time (7am BST), all six reactors of the Zaporizhzhia nuclear plant in southern Ukraine are still disconnected from Ukraine’s electricity grid, state nuclear company Energoatom said.

The Ukrainian company said electricity for the plant’s own needs was currently being supplied through a power line from Ukraine’s electricity system.

Work is underway to prepare the connection of two power units of the power plant to the grid, Energoatom said.

For the first time since Vladimir Putin’s invasion of Ukraine, India on Wednesday voted against Russia during a “procedural vote” at the UN security council.

India had so far abstained from several resolutions on the war, but called on both sides to end the violence. New Delhi has also refused to criticize Moscow for the unprovoked invasion.

The 15-member UN body had invited Ukrainian president Volodymyr Zelensky to address a meeting through a video conference on Wednesday.

Russian ambassador to the UN Vassily A Nebenzia, objecting to Mr Zelensky’s virtual participation, called for a procedural vote.

India’s vote went in favor of Mr Zelensky’s participation, while Russia voted against it. China abstained from the vote.

Russia and its proxy forces in Ukraine are operating 21 locations used to detain, interrogate and process prisoners of war and civilians, a new report claims.

The report by Yale University researchers backed by the US state department cites commercial satellite imagery and open-source information to identify with “high confidence” the separate locations, which include former schools, markets and regular prisons, Reuters reported.

It also identifies possible graves at one prison complex.

Nathaniel Raymond, the humanitarian research lab’s executive director, said the findings showed Russia and its proxies had established a “system of filtration” to sort people in areas that fall under Russian occupation that represents a “human rights emergency.”

Vladimir Putin has ordered the Russian military to increase by another 137,000 troops from next year as Moscow’s invasion in Ukraine passes the six-month mark.

The Russian president’s decree, signed on Thursday, did not explain whether the military will increase its ranks by drafting a bigger number of conscripts, taking more volunteer soldiers or using a combination of both.

The Kremlin has said that only volunteer contract soldiers take part in what it calls the “special military operation” in Ukraine, rejecting claims that it was considering a broad mobilisation.

The order comes amid reports that Russian forces have suffered heavy losses, although Moscow is yet to publish any official number of its casualties.

Putin orders another 137,000 Russia troops amid reports of heavy casualties

Western and Kyiv officials predict Russia’s losses in the thousands

Ukrainian troops have destroyed seven ammunition deports of the Russian army in the past week, a spokesperson for Ukraine’s southern military command said.

“Ammunition warehouses are one of the priority targets of our artillery, in particular, and air strikes, as these are stocks that the enemy would plan to use against our units,” Nataliya Humenyuk was quoted by Radio Free Europe as saying.

“Despite the fact that they are trying to disperse these stocks, as they have already felt that our interventions are quite spot-on and absolutely targeted, we still find places of new dislocation and destroy them anew.”

An obelisk with Soviet stars at the top that was the centerpiece of a monument commemorating the Red Army’s victory over Nazi Germany was taken down Thursday in Latvia’s capital Riga.

Heavy machinery was spotted behind a green privacy screen fence at the foot of the nearly 80-metre obelisk shortly before its removal.

The column, which had stood like a high-rise in the landscape of downtown Riga, crashed into a nearby pond at Victory Park.

A leading Latvian media outlet broadcast the event live, showing onlookers cheering and applauding as the obelisk fell. It wasn’t immediately clear what would happen to it.