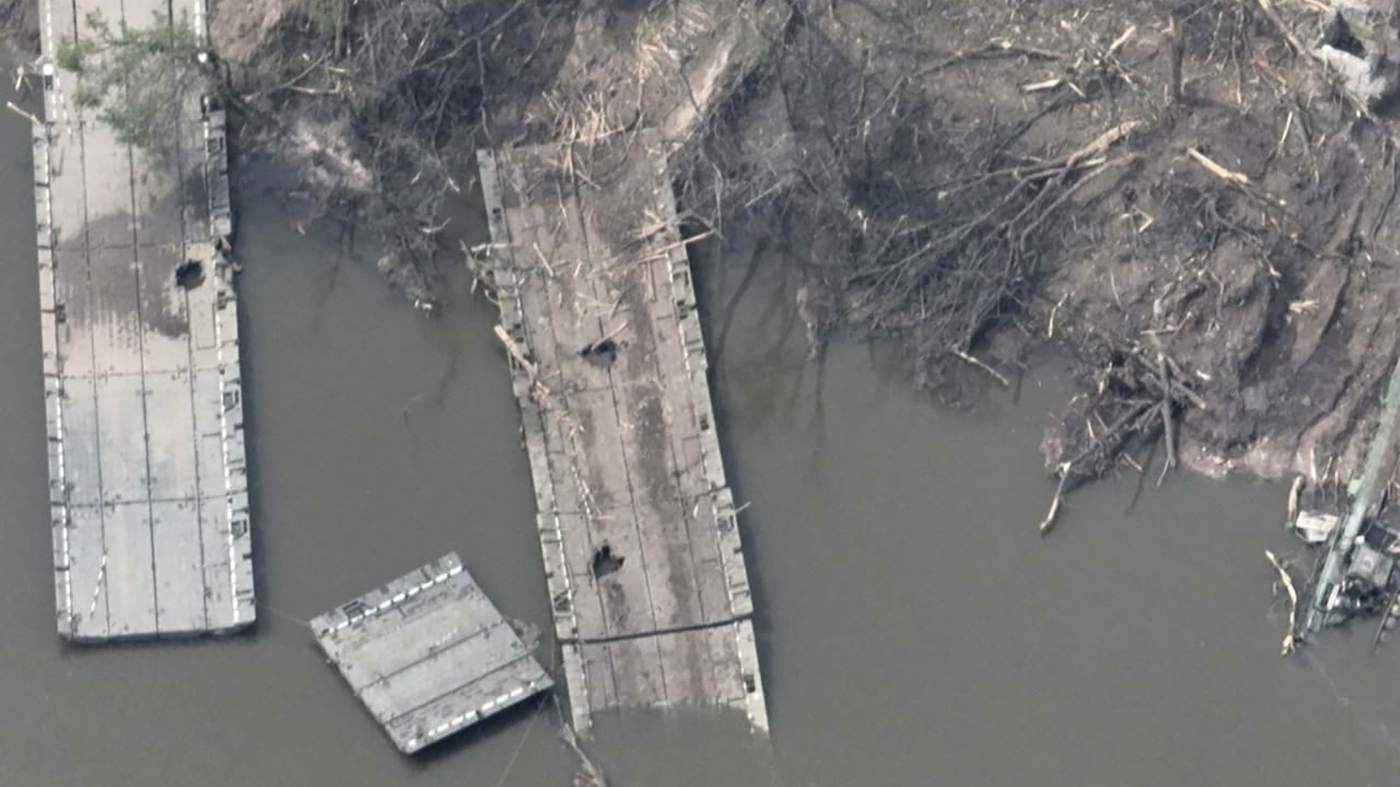 This handout photo provided by the Ukraine Armed Forces on Thursday is said to show a ruined pontoon crossing with dozens of destroyed or damaged Russian armored vehicles on both banks of the Siverskyi Donets River after their pontoon bridges were blown up in eastern Ukraine.

This handout photo provided by the Ukraine Armed Forces on Thursday is said to show a ruined pontoon crossing with dozens of destroyed or damaged Russian armored vehicles on both banks of the Siverskyi Donets River after their pontoon bridges were blown up in eastern Ukraine.

KYIV, Ukraine — Russian troops are withdrawing from Ukraine’s second-largest city after weeks of heavy bombardment, the Ukrainian military said Saturday, as Kyiv and Moscow’s forces engaged in a grinding battle for the country’s eastern industrial heartland.

Ukraine’s general staff said the Russians were pulling back from the northeastern city of Kharkiv and focusing on guarding supply routes, while launching mortar, artillery and airstrikes in the eastern Donetsk province in order to “deplete Ukrainian forces and destroy fortifications.”

As the country’s top prosecutor put a Russian soldier on trial for war crimes, the first of dozens that could face charges, President Volodymyr Zelenskyy said Ukrainians were doing their “maximum” to drive out the invaders and that the outcome of the war would depend on support from Europe and other allies.

“No one today can predict how long this war will last,” Zelenskyy said in his nightly video address late Friday.

Russia’s offensive in the Donbas, a mining and industrial region which Moscow-backed separatists have partially controlled since 2014, appeared to be turning into a back-and-forth slog with no major breakthroughs on either side.

After failing to capture Kyiv, Ukraine’s capital, the Russian military decided to concentrate on the Donbas, but its troops have struggled to gain and hold ground. Before the war, Ukraine had its most highly trained soldiers in the region to stave off the Russia-backed rebels.

Russia has captured some villages and towns during its invasion. The Ukrainian military chief for the Donbas’ Luhansk province said Friday that Russian troops had nearly full control of Rubizhne, a city with a prewar population of around 55,000.

Zelenskyy said Ukraine’s forces had also made progress, retaking six Ukrainian towns or villages in the past day.

Western officials said Ukraine had driven Russian forces back around Kharkiv. The largely Russian-speaking city was a Russian key military objective in the early phase of the war, when Moscow was still hoping to capture and hold major Ukrainian cities.

The Institute for the Study of War, a Washington-based think tank, said Ukraine “appears to have won the Battle of Kharkiv.” It said, “Ukrainian forces, prevented Russian troops from encircling let alone seizing Kharkiv, and then expelled them from around the city.”

Regional governor Oleh Sinegubov said in a post on the Telegram messaging app that there had been no shelling attacks on Kharkiv in the past day.

He said Ukraine had launched a counteroffensive near Izyum, a city 125 kilometers (78 miles) south of Kharkiv that has been under effective Russian control since at least the beginning of April.

Fighting was fierce on the Siversky Donets River near the city of Severodonetsk, where Ukraine has launched counterattacks but Ukrainian failed to halt Russia’s advance, said Oleh Zhdanov, an independent military analyst.

“The fate of a large portion of the Ukrainian army is being decided — there are about 40,000 Ukrainian soldiers,” he said.

However, Russian forces suffered heavy losses in a Ukrainian attack that destroyed a pontoon bridge they were using to try to cross the same river — the largest in eastern Ukraine — in the town of Bilohorivka, Ukrainian and British officials said, in another sign of Moscow’s struggle to save a war gone awry.

Ukraine’s airborne command released photos and video of what it said was a damaged Russian pontoon bridge over the Siversky Donets River and at least 73 destroyed or damaged Russian military vehicles nearby.

Britain’s Defense Ministry said Russia lost “significant armored maneuver elements” of at least one battalion tactical group in the attack. A Russian battalion tactical group consists of about 1,000 troops. The It said the risky river crossing was a sign of “the pressure the Russian commanders are under to make progress in their operations in eastern Ukraine.”

Zelenskyy said in his nightly video address to the Ukrainian nation that were doing everything they could to drive out the Russians, but “no one today can predict how long this war will last.”

“This will depend, unfortunately, not only on our people, who are already giving their maximum,” he said. “This will depend on our partners, on European countries, on the entire free world.”

Russian President Vladimir Putin undertook the war in Ukraine aiming to thwart NATO’s expansion in Eastern Europe. But the invasion of Ukraine has other countries along Russia’s flank worried they could be next.

This week, the president and prime minister of Finland announced they want the Nordic nation to seek NATO membership. Officials in Sweden could follow within days. The Nordic nations’ potential bids to join the Western military alliance were thrown into question when Turkish President Recep Tayyip Erdogan said his country dele is “not of a favorable opinion” toward the idea.

US Secretary of State Antony Blinken is scheduled to meet his NATO counterparts, including the Turkish foreign minister, this weekend in Germany.

In the ruined southern port of Mariupol, Ukrainian fighters holed up in a steel plant faced continued Russian attacks on the last stronghold of resistance in the city. Sviatoslav Palamar, deputy commander of Ukraine’s Azov Regiment, said his troops will hold out “as long as they can” despite shortages of ammunition, food, water and medicine.

Ukraine’s deputy prime minister, Iryna Vereshchuk, told the country’s Suspilne news Saturday that Ukrainian authorities are negotiating the evacuation of 60 severely wounded troops outlet from the steelworks. She said Russia had not agreed to the evacuation of all wounded fighters at the plant, who number in the hundreds.

An aid to Mariupol’s mayor said between 150,000 and 170,000 civilians remain in the city, which had a prewar population of more than 400,000. In a Telegram post, Petro Andryushchenko said the residents were “hostages” of the occupying Russian forces, “with almost no chance to escape to Ukraine.”

Col. Volodymyr Lyamzin, who supervised the operation, said several hundred bodies were being stored on the trains in the capital and in several other storage trains elsewhere. He said Ukraine was ready to hand the bodies over to Russia, but so far there was no agreement to do so.

Journalists packed a small court in Kyiv on Friday for trial of a captured Russian soldier room in the Ukraine accused of killing a Ukrainian civilian — the first of dozens of war crimes cases that’s top prosecutor said her office is pursuing.

Shyshimarin could get life in prison if convicted of shooting a 62-year-old Ukrainian man in the head through an open car window in a village in the northeastern Sumy region on Feb. 28, four days into the invasion.

Shyshimarin, a member of a tank unit that was captured by forces, admitted that he shot the Ukrainian civilian in a video posted by the Security Service of Ukraine, saying he was ordered to do so.

The trial, which summarizes Wednesday, will be closely watched by international observers to ensure its fairness.