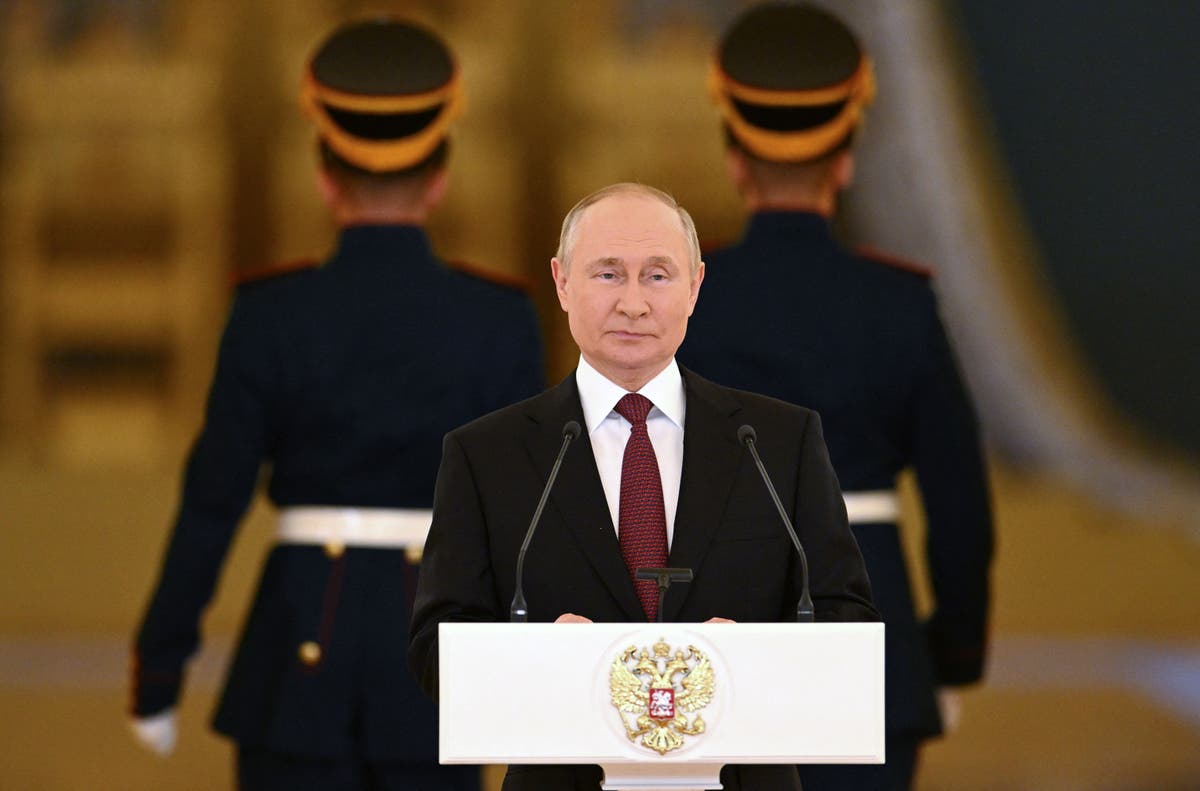 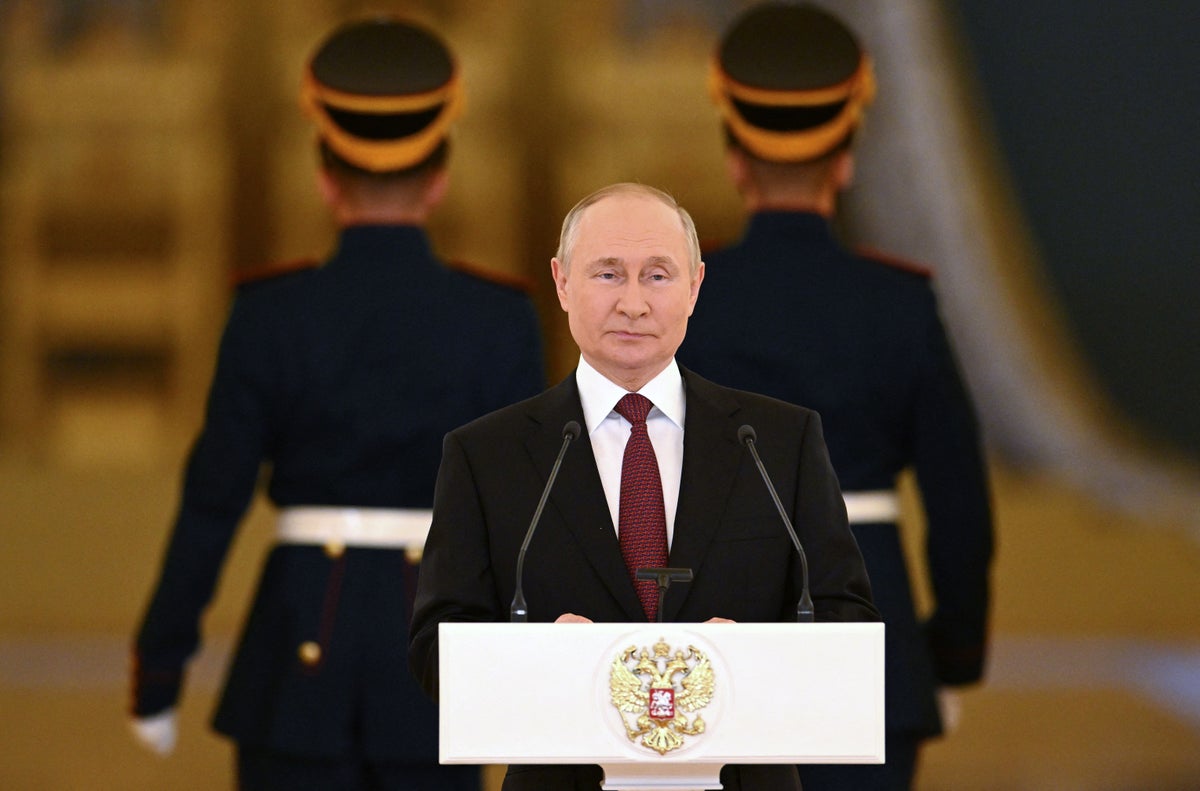 A Russian missile strike on a humanitarian convoy in Ukraine has killed 23 people, officials said as Vladimir Putin prepared to make a major speech on annexation plans.

Nearly 30 more were wounded in the attack on the Ukrainian city of Zaporizhzhia, according to the regional governor.

Over in Russia, Mr Putin is set to make his first public appearance today since so-called referendums were held in four occupied Ukrainian territories, in which he will declare the regions are now joining the Russian Federation.

Preparations have been made at Moscow’s Red Square for a grand ceremony proclaiming the inclusion of these regions into Russian territory.

The Russian president is also expected to give a speech today after meeting the Moscow-backed leaders of the four regions.

The move by the Kremlin comes despite several warnings from world leaders who say they will never recognize the voting exercise and dismissed it as illegal and a “sham”.

‘We are just telling you we have nuclear weapons,’ Russian politician says

The Dumas member said Russia would not use them first, but only in response to a nuclear attack on its territory.

“Using nuclear weapon in 21st century, it is an insane decision. We are not insane,” Mr Popov said.

Evgeny Popov, a Putin supporter and member of the Russian Dumas, has just been on Sky News talking about annexation and the Ukraine war.

When asked about warnings from Western leaders the annexation would be illegal, Mr Popov said it was considered “legal for Russia” and claimed his country “must defend” people in the Donbas. “They have been living under Ukrainian shelling for the last eight years,” he claimed.

The politician was also asked about reports of Russians fleeing the country after being called up for military service. “Yes, some people are fleeing Russia. But much more people – one hundred thousand people – are joining the army now,” he told Sky News.

Here is an image from St Petersburg today. The billboard carries the slogan: “Serving Russia is a real job.”

Russian soldiers who die in the line of duty in Ukraine have all of their sins forgiven, the patriarch of the Russian Orthodox Church proclaimed in a sermon, comparing their sacrificial death to that of Jesus.

Here is a reminder of what happened earlier this week:

A death toll has been announced for a Russian missile strike that hit a humanitarian convoy on Friday.

At least 23 people were killed and 28 more wounded in the attack on civilian vehicles near the southern Ukrainian city of Zaporizhzhia, according to the regional governor.

“There are dead and wounded, rescuers are operating,” he wrote on the Telegram messaging app.

It is too soon to speculate who could have caused the Nord Stream pipeline ruptures, the US defense secretary Lloyd Austin said.

“In terms of the attack – or the damage to the pipeline, at this point I think there’s a lot of speculation. But quite frankly, until a complete investigation is done, no one will be able to really determine for certain what happened,” the top Pentagon official said on Thursday.

He added that the incident has been discussed with Denmark.

“Until we get further information, or are able to do further analysis, we won’t speculate on who may have been responsible,” Mr Austin said.

“Medical provision for Russian combat troops in Ukraine is probably growing worse. Some newly mobilized Russian reservists have been ordered to source their own combat first aid supplies, with the advice that female sanitary products are a cost-effective solution,” the ministry said, referring to reports where Russian men have been asked to use tampons for treating bullet wounds.

Medical training and first-aid awareness is likely poor, the ministry said in its latest intelligence update on the Ukraine war.

“Some Russia troops have obtained their own modern, Western-style combat tourniquets but have stowed them on their equipment using cable-ties, rather than with the Velcro provided – probably because such equipment is scarce and liable to be pilfered,” it added.

This is “almost certain to hamper or render impossible the timely application of tourniquet care in the case of catastrophic bleeding on the battlefield”.

Faced with poor medical provision, the Russian troops’ lack of confidence in the aid “is almost certainly contributing to a declining state of morale and a lack of willingness to undertake offensive operations in many units in Ukraine.”

Russia will annex itself to catastrophe – Zelensky

Volodymyr Zelensky has renounced Russia’s “attempted annexation” and said it will fill the occupied territory with graves.

“Everyone in the world understands well what such an attempted annexation would actually mean. It won’t mean what the Kremlin hopes for,” Mr Zelensky said in his nightly address from him.

The wartime president added: “Russia will not get a new territory of Ukraine. Russia will annex itself to the catastrophe that it has brought to the occupied territory of our country.

“Russia will equate itself with the so-called ‘DPR’ and ‘LPR’, and will completely finish off those institutions of normal statehood that still remain in Russia.”

Russia will fill the occupied territory of Ukraine with graves, he said, and added that: “There are more and more graves on the territory of Russia itself.

This is the only way the Russian police and Russian special services will work now,” he said.