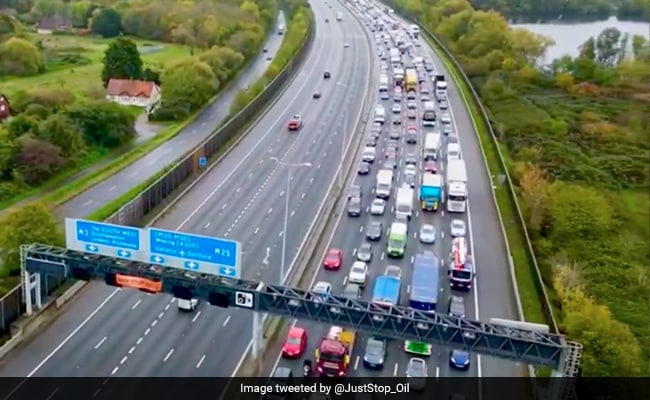 The Just Stop Oil group members had blocked traffic in at least six locations on the M25 motorway.

The Just Stop Oil group, which wants the UK government to halt new oil and gas extraction, said its members had blocked traffic in at least six locations on the M25 motorway, which encircles the British capital.

The latest demonstration with the world leaders gather for the United Nations’ COP27 climate summit in Egypt, where governments are under pressure to step up efforts to combat global heating.

Just Stop Oil, which has been staging disruptive protests throughout this year, said it informed police late on Sunday about its plans to climb gantries over the country’s busiest motorway during the Monday morning rush hour.

Indigo Rumblelow, a spokesperson for Just Stop Oil, said it has the legal right “to cause disruption to prevent a greater harm”.

“After 30 years of public debate, lobbying and petitioning… we are still on course for catastrophic climate breakdown and we have nowhere else to go,” she added.

“What did you expect? This Government is complicit in an illegal & unconstitutional plan to issue more licenses and consents for new oil & gas — a plan that will take the world over 1.5°C…#COP27#M25pic.twitter.com/RzKoVCKcoO

The government is in the process of passing legislation to crack down on direct action protests.

London’s Metropolitan Police said it had launched a “significant proactive policing operation” late on Sunday to identify and arrest people it believed were “intent on causing reckless and serious disruption to the public”.

Three people were arrested on Sunday evening and four others were held on Monday morning for conspiracy to cause a public nuisance, the force said.

Other police forces responsible for affected areas on the M25 said officers had made arrests early on Monday after they were forced to block traffic to remove the activists.

The Met’s Assistant Commissioner Matt Twist said they had used more than 10,000 officer shifts to police Just Stop Oil protests since the start of October.

“These are officers who would otherwise be dealing with issues that matter to local communities, such as knife crime, safeguarding and responding to burglaries,” he added.