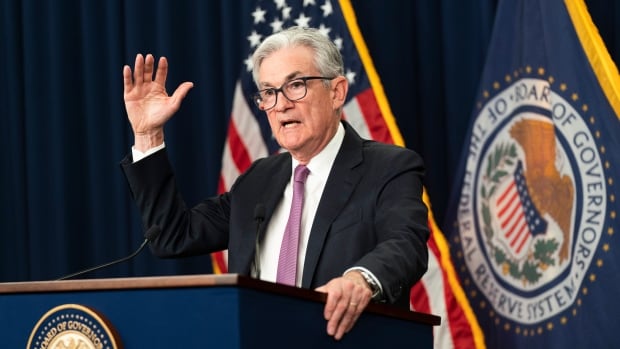 Powell also warned more explicitly than he has in the past that the Fed’s continued tightening of credit will cause pain for many households and businesses as its higher rates further slow the economy and potentially lead to job losses.

“These are the unfortunate costs of reducing inflation,” he said in a high-profile speech at the Fed’s annual economic symposium in Jackson Hole, Wyo. “But a failure to restore price stability would mean far greater pain.”

Investors had been hoping for a signal that the Fed might moderate its rate increases later this year if inflation were to show further signs of easing. But the Fed chair indicated that time may not be near.

Fed might slow pace of rate hikes ‘at some point’

After hiking its key short term rate by three-quarters of a point at each of its past two meetings — part of the Fed’s fastest series of rate increases since the early 1980s — Powell said the Fed might ease up on that pace “at some point ” — suggesting that any such slowing isn’t near.

Powell said the size of the Fed’s rate increase at its next meeting in late September — whether one-half or three-quarters of a percentage point — will depend on inflation and jobs data. An increase of either size, though, would exceed the Fed’s traditional quarter-point hike, a reflection of how severe inflation has become.

US central bank keen to drag inflation down

CBC News senior business correspondent Peter Armstrong breaks down what the US central bank’s interest rate hike signals for the economy, and what it could mean for Canadians dealing with inflation squeezing their budgets

While lower inflation readings that have been reported for July have been “welcome,” the Fed Chair said, “a single month’s improvement falls far short of what the Committee will need to see before we are confident that inflation is moving down.”

Powell noted that the history of high inflation in the 1970s, when the central bank sought to counter high prices with only intermittent rate hikes, shows that the Fed must stay focused.

“The historical record cautions strongly against prematurely” lowering interest rates, he said. “We must keep at it until the job is done.”

Powell’s speech is the marquee event of the Fed’s annual economic symposium at Jackson Hole, the first time the conference of central bankers is being held in person since 2019, as it went virtual for two years during the COVID-19 pandemic.

Since March, the Fed has implemented its fastest pace of rate increases in decades to try to curb inflation, which has punished households with soaring costs for food, gas, rent and other necessities. The central bank has lifted its benchmark rate by two full percentage points in just four meetings, to a range from 2.25 per cent to 2.5 per cent.

Those hikes have led to higher costs for mortgages, car loans and other consumer and business borrowing. Home sales have been plunging since the Fed first signaled it would raise borrowing costs.

Slowing the economy without triggering a recession

In June, the Fed’s policymakers signaled that they expected to end 2022 with their key rate in a range of 3.25 per cent to 3.5 per cent, and then rise further next year to between 3.75 per cent and 4 per cent. If rates reach projected levels at the end of this year, they would be at their highest point since 2008.

Powell is betting that he can engineer a high-risk outcome: slow the economy enough to ease inflation pressures yet not so much as to trigger a recession.

WATCH | US interest rates will affect Canadians as well:

CBC’s senior business correspondent Peter Armstrong helps makes sense of the US Federal Reserve’s interest rate hike — and what it might signal for the Canadian economy.

The Fed chair’s task has been complicated by the US economy’s cloudy picture: On Thursday, the US government said its economy shrank at a 0.6 per cent annual rate in the period between April and June, the second straight quarter of contraction. Yet employers are still hiring rapidly, and the number of people seeking aid — a measure of layoffs — remains relatively low.

At the same time, inflation is still crushingly high, although it has shown some signs of easing, notably in the form of declining gas prices.

At their meeting in July, Fed policymakers expressed two competing concerns that highlighted their delicate task.

According to minutes from that meeting, the officials — who aren’t identified by name — have prioritized their inflation fight. Still, some officials said there was a risk that the Fed would raise borrowing costs more than necessary, risking a recession. If inflation were to fall closer to the Fed’s two per cent target and the economy weakened further, those diverging views could become hard to reconcile.

At last year’s Jackson Hole symposium, Powell listed five reasons why he thought inflation would be “transitory.” Yet it has persisted instead, and many economists have noted that those remarks haven’t aged well.

Powell indirectly acknowledged that history at the outset of his remarks Friday, when he said that “at past Jackson Hole conferences, I have discussed broad topics such as the ever-changing structure of the economy and the challenges of conducting monetary policy.”

“Today,” he said, “my remarks will be shorter, my focus narrower and my message more direct.”