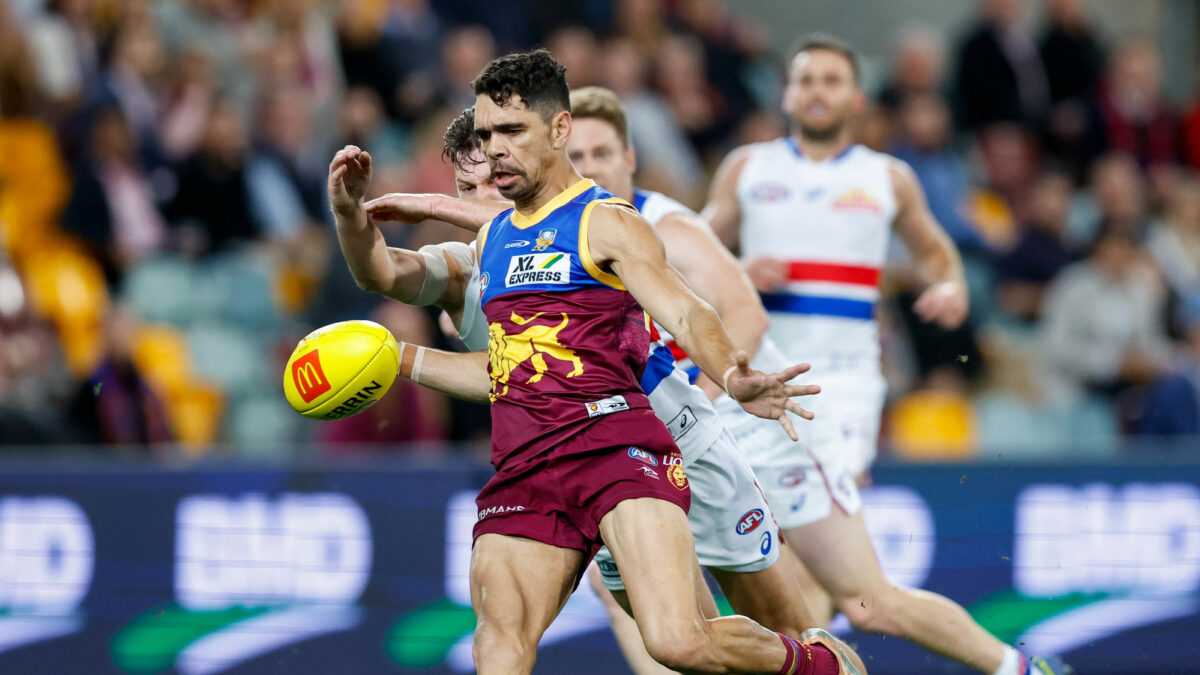 People seemed quick to jump off the Brisbane bandwagon after last week’s horror show against Melbourne. But the mark of a good side is often how they respond: and in dismantling the Western Bulldogs by 41 points despite a series of injuries to key cogs and a shaky start, the Lions showed the remain, if not Demons quality, then still damn good .

The scoreboard ends up deservingly one-sided; this is a Bulldogs outfit with many flaws, both in game style and the absence of important personnel. But it takes a good side to exploit them all as surgically as the Lions did on Thursday night. This is a serious football team.

Despite losing Dayne Zorko after the first five minutes and Daniel Rich midway through the second term – the former appears somewhat more concerning the latter – the Lions hardly missed a beat in turning defense into offense with their usual ballistic ball movement from half-back.

Chris Fagan has his share of detractors, but this was a masterful performance from the coaches’ box – or, more accurately, the bench. In every measure, he outpointed his counterpart Luke Beveridge, in a manner making it easy to forget that it was only nine months ago that the Dogs left this venue with victory in one of the greatest semi-finals ever.

This Lions team might not be better than that side, but they’re definitely smarter. And they definitely learned a whole lot from their loss to the Dees – the responses go, this was pretty emphatic.

Having seen tackles burst at every opportunity last week, the Lions flipped the script on the Dogs. Front and center was Charlie Cameron, who allayed his unmatched goal smarts and freakish pace with a rare display of strength against an opponent in Anthony Scott who could match one of those attributes, but not close to all three.

The Lions’ set-up is ideal for dismantling teams like the Bulldogs; sides that may have one weapon in their arsenal, but with a weakness without the ball that the Demons simply don’t have. The Dogs’ on-ball brigade ran rampant early, but the Lions absorbed the bulk of the damage, upped the intensity, and piled on the goals.

Without Rich, felled early with a hamstring tweak, it fell to Keidean Coleman, in his 33rd game, to take over the role as rebounder in chief. No one in the game could match the penetration in Rich’s left boot, but what Coleman’s kicks lacked in size they more than made up for in precision.

The Lions looked for him at every opportunity, as they do Rich – he’d rack up 10 marks floating on the flank, and 24 disposals from them – and began the spread forward.

The Lions scored 48 points for the evening – nearly half their score – from chains starting in their defensive 50. Coleman was involved in plenty of those. His defense dele, too, was excellent when required, helping to blanket Dogs smalls Cody Weightman and Rhylee West, both of whom only hit the scoreboard with the game run and done.

Slingshot football is ideal for picking apart the Dogs – especially if, like the Lions, you are a brilliant kicking outfit with a solid enough defense. GWS had the former but not the latter on the Bulldogs a fortnight ago; Tonight, the Lions were able to stifle the Dogs when they had the ball, then rebound with devastating effect.

The stat of the night, as it is often against the Bulldogs, was the inside 50 efficiency percentage – the Lions scored 28 times from 50 inside 50s. Indeed, the margin could have been greater, but for a run of four hit the posts in the first and second quarters while the Dogs were in control. Once they found their range, there was no stopping them.

The pressure on the ball carrier was worlds apart from what the Lions dished up against the Dees. The Dogs comfortably won the clearance count – it was 11-6 at quarter time and 45-30 by the final siren – but the quality of the exhaust couldn’t have been more distinct.

When the Dogs won it, kicks were frequently hit, high, and hacked under significant duress – Harris Andrews eats them for breakfast against a Bulldogs side with only Aaron Naughton as a regular aerial threat. The Lions’ set-up, particularly from the centre, was designed with this in mind: with an extra man always on defensive side, they saw a fault when Marcus Bontempelli waltzed the ball forward from the first two center bounces from the second term, clamped it, and denied it for the rest of the match.

Then, when they won it, their plan came into action – a quick handball from Lachie Neale to a running half-back, usually Coleman, a powerful overlap run forward, and a long kick towards their forwards in one-on-one contests with the league’s worst one-on-one defenders. Charlie, over to you.

Midway through the first quarter, though, and the Lions, apparently two down on the bench with Zorko done and Rich soon to follow, seemed again in strife. The intensity was worryingly low – just seven tackles for the first quarter – and with the Dogs’ on-ball brigade led by Tom Liberatore on fire, they were struggling to generate sufficient thrust forward to satisfy their burgeoning forward line.

But even then, there were worrying signs for the Dogs – despite all their dominance, only two of those ‘posters’ were keeping the Lions at bay. Their defense has become a major Achilles heel against high-quality sides, and was again tonight.

Having been taken to the cleaners by tall forwards all season, from Jeremy Cameron to Mitch Lewis to Todd Marshall, it was a night for the Lions smalls to feast. No Taylor Duryea, no Ed Richards, and no Caleb Daniel left a gaping hole in the Dogs’ defense; as good as Cameron was throughout, it was Lincoln McCarthy who first sparked the Lions to life with excellent overhead marking, and straight finishing at a time when many of his teammates – looking at you, Joe Daniher – erred.

Shutting down Tom Liberatore, too, was key – with 11 disposals, five clearances and a goal to quarter time, the in-form Dog was the difference in the game. From there, though, he’d have only three more clearances for the match, as the Lions began to break even from the centre. And as I’ve written repeatedly in these pages throughout the year, if you can break even with the Dogs at the coalface, most good sides will win and win well.

So what do we learn? The Lions are good – the frustration with them is they can put sides to the sword like nobody’s business, but in the heat of battle against a finals contender – or, y’know, in an actual final – too often they are shown up as vulnerable defensively.

That’s why being able to restrict the Dogs, in white-hot attacking form, was so impressive. Aside from the mighty Naughton, and an occasional cameo from the wayward Jamarra Ugle-Hagan, no forward in red, white and blue had an impact on the match.

When the ball came in high, it was defused, either with an Andrews mark or a timely spoil from Marcus Adams or Brandon Starcevich. When it hit the ground, it was the Lions again swarming, with numbers around the ball and refusing to allow open space. Compare that to the other end of the ground, where there was enough open grass that any random Queenslander with a herd of cows needing a feed would have been enviously watching on.

Andrews had his best game in a while – freed up by the absence of much accountability, with direct opponent Josh Schache barely worth his time in defending – Coleman was Rich-like, and even Cameron and McCarthy worked back as hard as anyone to defend. Take a close look at Cameron next time he plays your team, because the amount of times he busts a gut to get back into defensive 50 to help out his team, then is up the other end in the blink of an eye, is like no other goalsneak in the competition. 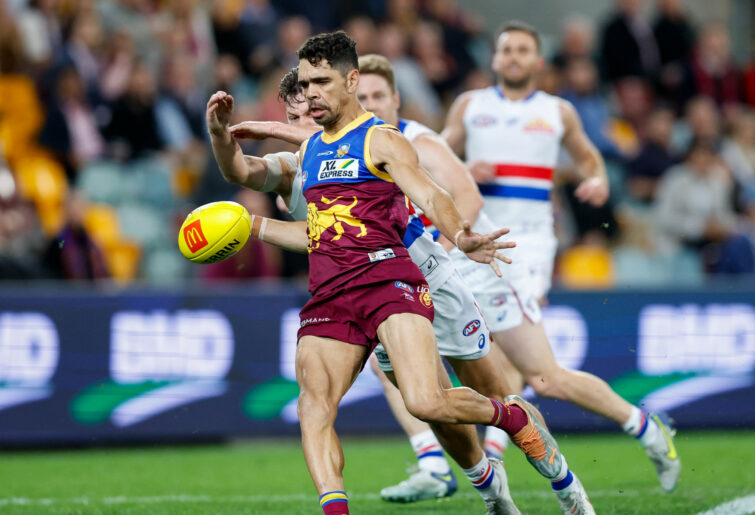 Charlie Cameron of the Lions kicks a goal. (Photo by Russell Freeman/AFL Photos via Getty Images)

And for the Dogs? It’s the tale of their year writ small – the midfield holds its weight but eventually collapses, the forward line can’t make the most of its chances, and the defense simply isn’t given enough help.

The Dogs’ high defensive press does help them keep the ball locked in against lesser teams, but quality opposition has the tools to scythe through with precision passing, opening up the coconut for forwards to feast on the milk. I’m surprised none of the midfielders have complained of neck soreness yet after watching the ball sail over their heads from no-man’s land in the middle of the ground.

Last year’s runner-up likely need six wins of their last eight, facing the toughest fixture in the game, to squeeze into the finals. That means no more slip-ups against the likes of St Kilda, Hawthorn and GWS, and doing things like beating Sydney in Sydney next week or Fremantle at Docklands. It’s not impossible – but you can’t have any confidence in that defense holding firm. If they make finals, they won’t be doing much.

The Lions, though, have hope. Their best is as good, and as exciting, as any side in the competition – but it’s in September where this side, once again, will be judged.