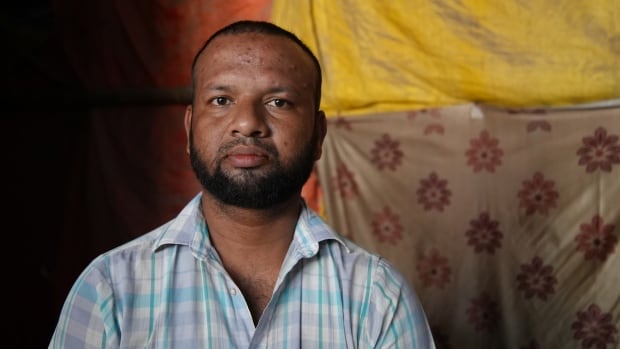 The heat bears down on Mohammad Salimullah as he trudges through the makeshift camp in the southeast part of India’s capital. It has been his family’s home for 10 years, ever since they escaped a campaign of violence in Myanmar’s Rakhine state.

“We never imagined leaving our country and coming to India to live in these uncertain conditions,” said Salimullah, 36. “In Myanmar, we were living in oppression. Here, you could say we are living a life of freedom — but look at our situation.”

The father of two stooped to pick up a neighbour’s crying toddler, soothing him as he described to CBC the squalid conditions of the improvised refugee settlement in New Delhi that more than 50 families belonging to Myanmar’s persecuted Rohingya Muslim minority call home.

The camp consists of cobbled tents together with scraps of old sheets, tattered tarps, bamboo sticks and whatever else the adults could scrounge. It has no running water, only intermittent electricity and little protection from the elements.

“Our young suffer from diarrhea and frequent vomiting,” Salimullah continued. “The future of our children is bleak.”

It’s also precarious. The makeshift camp has been in Delhi’s Kalindi Kunj area for 10 years, but numbers swelled in 2017. That’s when hundreds of thousands of Rohingya fled a brutal military crackdown in Myanmar that the United Nations described as a “textbook example of ethnic cleansing,” and crossed into neighboring countries like Bangladesh and India.

The more than 250 people living at the Delhi camp carry official refugee status cards issued by the United Nations, meant to offer protection from arbitrary detention. But that means little to Indian authorities.

The Indian government considers the Rohingya “illegal foreigners,” and officials have repeatedly stated they wish to deport the refugees to Myanmar, even after the military staged a coup to seize power in February 2021, plunging the country into further violence.

On Wednesday, Tom Andrews, the UN’s special rapporteur on human rights in Myanmar, told the international body’s human rights council that conditions for the country’s 54 million people have gone from “bad to worse to horrific” since the military took control.

He added that “five years after a genocidal campaign was launched against them, the Rohingya continue to face discrimination, repression and human rights abuses each and every day.”

The UN considers Rohingya Muslims both the most persecuted minority in the world and one of the world’s largest stateless populations, denied citizenship for decades in their native country.

Estimates vary widely, but human rights groups believe there are some 40,000 Rohingya in India, at least half of whom are registered refugees with the UN’s Human Rights Commission.

The threat of eviction from India flared up again last month, when a senior federal minister tweeted that the refugees living in Delhi would be provided housing, only to have his own government deny that offer hours later.

The ruling Bharatiya Janata Party (BJP) government reiterated that the Rohingya Muslims are considered illegal immigrants, and stated that they should be moved to detention centers to await deportation.

That same day, Aug. 17, the party’s national spokesperson, Gautav Bhatia, described the Rohingya as a “threat to national security” and said the government of Prime Minister Narendra Modi “has a clear policy that there will be no compromise on national security.”

The Indian government has threatened to deport Rohingya refugees who have been living in a tent city in Delhi, since being expelled from Myanmar in 2017.

Following the violence in Myanmar in 2017, Salimullah filed an appeal on behalf of his community to India’s Supreme Court, arguing that the Rohingya deserve to stay in the country because their lives would be in danger if they were deported back to Myanmar. It was rejected in April 2021, paving the way for the Indian government to choose to pursue detention and deportation.

A sense of desperation, mingled with fear, permeates the Delhi camp, said Abdul Karim, who is just shy of 17 and came to India when he was five years old.

“My whole journey, my whole life, has been as a refugee. So I’m feeling very bad. And I think there is no future for us,” he told CBC.

“Whenever our people go to find work, they’re denied because they [are told]’You are not Indian and you don’t have documents, so we cannot provide you a job.'”

The discrimination Karim feels also pains Mizan, 20, who lives in a neighboring tent with her parents and two younger siblings, aged five and seven.

She said it’s distressing to hear local leaders refer to the Rohingya refugees as “terrorists” or “insurgents” when many have been in India for years and just want to live in peace.

Mizan has always dreamed of becoming a doctor, but she knows that without citizenship papers, or a feeling of security in India, that dream will never come true.

“One of the biggest struggles is, as soon as we start earning and making ends meet, we have incidents like fires breaking out,” the 20-year old said. She was referring to fires in 2018 and 2021 that started at night and ripped through the camp, destroying her family’s tent and many others.

“My schoolwork, my notes, my books were all destroyed.”

She called it “soul-crushing,” because she and her family expected life to be so much better in India.

The country is not a signatory to international laws such as the UN Refugee Convention and its 1967 Protocol, which protect the rights of refugees to seek asylum and shield them from being sent back to a country where their lives are in danger.

Experts say that, along with the fact that India does not have an overarching national policy on refugees, contributions to an ad hoc system that can be bent at will by the Indian government of the day, with decisions often made based on the religion of individual refugee groups.

“The absence of policy or absence of a law has basically helped the government of India to adopt discriminatory policies and put all refugees at risk,” said Suhas Chakma, director of Rights and Risks Analysis Group, a New Delhi think-tank that tracks potential human rights violations.

Chakma pointed to the warm welcome Tibetan and Sri Lankan Tamil refugees have received in India, in stark contrast to the narrative around the Rohingya, a Muslim community.

“The government of India is taking a very hard-line, security-centric approach [with the Rohingya]despite having no concrete evidence [of a national security risk].”

It’s left the families in the squalid camp in Delhi feeling helpless and desperate.

“It’s our kismet, our plight,” Mohammad Salimullah said, with resignation, even on a rare day when a local fishmonger passed by, with fish that remembered many of the home to which they wish to return.

But horrifying memories of the violence and persecution at the hands of Myanmar’s military still haunt them.

“We saw our brothers and sisters being killed and hacked in Burma,” Salimullah recalled.

“We are living [in India] legally,” he said. “We are humans. We have the right to live in peace.”