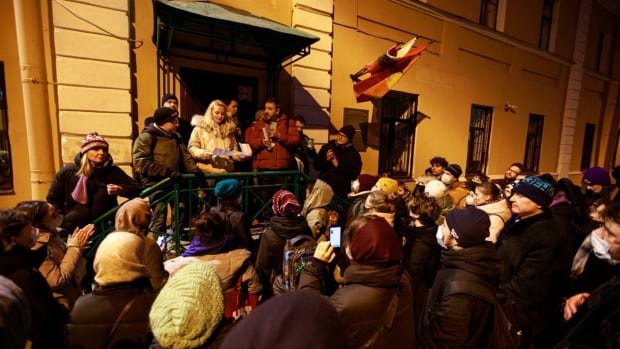 When Nikita Yuferev and colleagues from the Smolninskoye local council in St. Petersburg, Russia, crafted a letter earlier this month calling for President Vladimir Putin to be removed from the office, they needed to choose their words carefully.

If they described what was happening in Ukraine as a “war,” they could be sent to prison, like an opposition councilor from Moscow who was recently sentenced to seven years for discrediting the military.

So they avoided the word, and instead accused Russia’s president of “high treason.”

“Vladimir Putin is the main existential threat to Russia,” said Yuferev, in a Zoom interview with CBC from St. Petersburg on Sept. 15.

“We simply ask him to resign, because he poses a threat to the security of Russia and the safety of Russian citizens.”

Yuferev’s plea, which he sent to Russian lawmakers last week, was one of dozens recently made by local councillors. The group represents districts in Moscow, St. Petersburg and other areas of Russia.

While their language and conviction is strong, these letters and petitions — which were submitted to Russia’s State Duma, the country’s lower house of parliament — are seen as largely symbolic.

These politicians hold very little power, and there are no signs Russia is letting up on the invasion it launched in February, even though its military has recently been forced out of a large swath of eastern Ukraine that it had occupied for months.

A signal to ‘like-minded people’

In the letter that Yuferev draft helped, the councillors argued that Putin’s decision to start the operation in Ukraine has been detrimental to Russian society, arguing that young citizens have been killed and some of the most educated have left the country.

They also say the Russian economy is struggling and that foreign companies have pulled out.

Yuferev, 34, says after the letter was posted to social media, the councillors in his district received a lot of support from the public.

He says that people came up to shake his hand on the street, and one man even offered to buy Yuferev, his wife and two children plane tickets to Mexico, so they could flee the country if they needed to. Yuferev says he politely declined the offer, as he has no intention of leaving Russia.

Even so, he and his fellow councilors were hauled into court in recent days and fined the equivalent of $1,000 Cdn. But Yuferev doesn’t plan to pay the fine right away, as he and others want to challenge the court’s decision, insisting they aren’t doing anything illegal.

The court also ruled that several prior council meetings were invalid, paving the way for council to be dissolved, something Yuferev says pro-Putin lawmakers have been trying to do for three years, in order to discredit them.

Yuferev says his council had previously sent letters to Russia’s parliament demanding an end to the “special operation” in Ukraine, so the most recent push for Putin’s resignation was part of a plan to send a signal to “like-minded” people.

“With these actions, we show that [these people] are not alone, that there are a lot of us in Russia,” Yuferev said.

In an email to CBC, she says these councilors were elected several years ago — in another “epoch” — and that the Kremlin will not tolerate the activities of the few remaining opposition members.

But Putin and his government aren’t just facing criticism from the anti-war crowd. There is also concern from pro-war patriots, who are angry the Russian military has not only failed to take a larger chunk of Ukraine, but that it has lost the eastern city of Izyum and surrounding territory, which Russia has occupied since April.

Putin shores up support from China after losses in Ukraine

Russian President Vladimir Putin met with China’s President Xi Jinping at a summit in Uzebekistan in an attempt to strengthen relations with his remaining allies after a stunning week of losses in Ukraine, and amid growing dissent within his own country.

Far from calling for an end to the Ukraine invasion, these figures are using social media and appearances on state television to call for Russia to ratchet up its attacks.

Igor Girkin, a former officer in the Russian security service FSB who helped launch the 2014 war in Ukraine’s eastern Donbas region, has criticized Russia’s defense online, saying that Russia will be defeated unless it mobilizes more troops.

On Sept. 11, Ramzan Kadyrov, the Kremlin-appointed leader of Chechnya, posted on his Telegram account that “unless changes in strategy are made, I will be forced to speak with the leadership of defense ministry.”

One day earlier, officials said that the Russian military was pulling troops out of Izyum and the surrounding area to “regroup.” According to Ukrainian officials, 8,000 square kilometers of territory have been taken back by Ukrainian forces so far this month.

While taking part in a summit in Samarkand, Uzbekistan, on Friday, Putin said Russia’s goal remains to liberate all of Donbas, and that there was no need to change its plan. He told the Shanghai Co-operation Organization that Russia was not in a hurry to finish its “special military operation.”

While Yuferev says a number of people shared their support for his appeal to remove Putin from office, public opinion polls suggest the vast majority of Russians still back the president.

THE recent poll by the Moscow based Levada Center, which was declared a foreign agent in 2012, found that in August, roughly 83 per cent of respondents approved of Putin, and 67 per cent thought that the country was heading in the right direction.