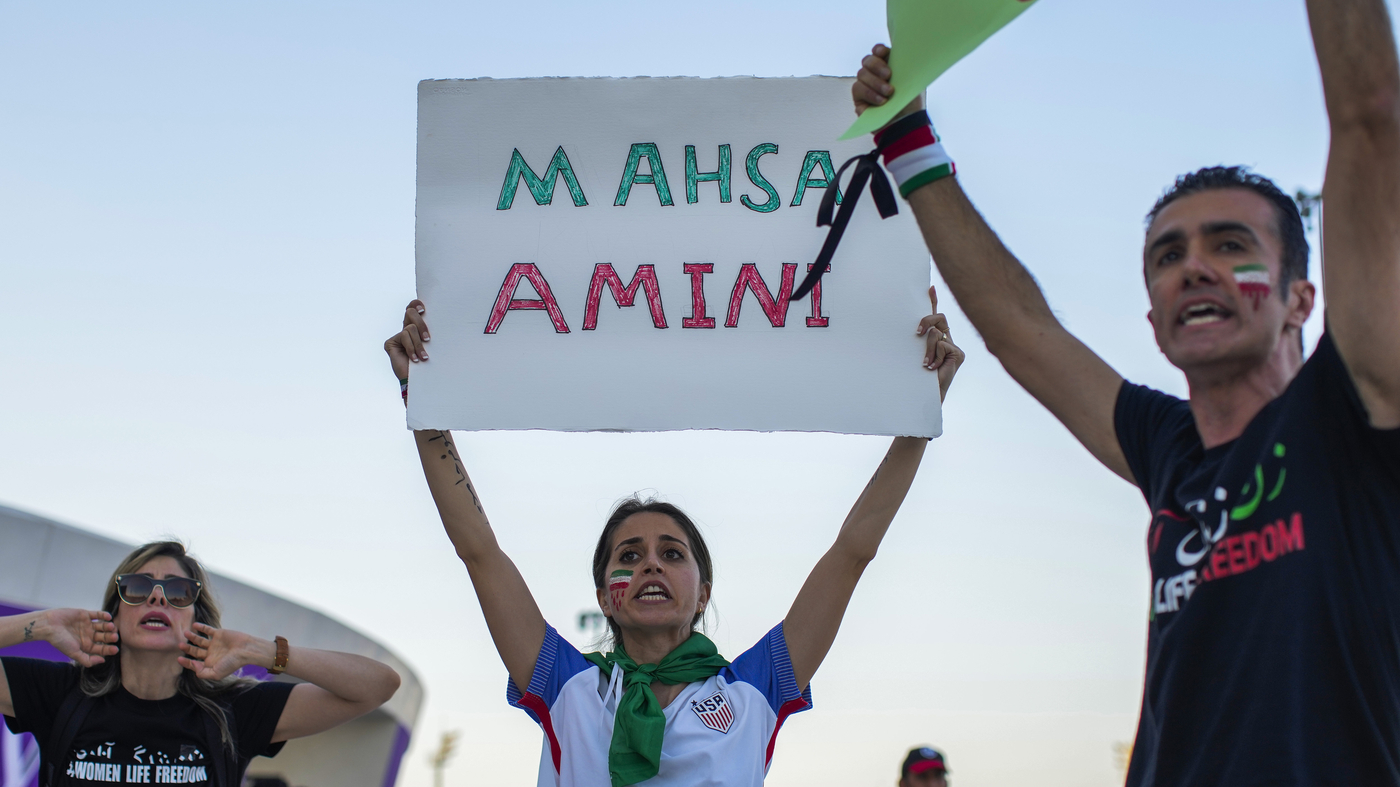 A woman at a protest in Qatar holds up a sign bearing the name of Mahsa Amini, the 22-year-old Iranian woman whose death in police custody sparked a nationwide protest movement.

A woman at a protest in Qatar holds up a sign bearing the name of Mahsa Amini, the 22-year-old Iranian woman whose death in police custody sparked a nationwide protest movement.

Tuesday’s World Cup match between Iran and the US is going to be widely watched not only for its tournament implications. The game will also serve as a spotlight on the massive human rights protest movement that has swept across Iran this fall.

Hundreds of thousands of Iranians have taken to the streets since the September death of a 22-year-old woman in police custody, in what has become perhaps the biggest challenge to the authoritarian regime that has ruled the country since 1979’s Islamic Revolution.

And some Iranian fans hope a victory against the US on Tuesday could generate even more enthusiasm for the anti-government movement.

“I believe that every international event, especially on the scale of the World Cup, is an opportunity to be seen and heard, both to the spectators present in the stadium in Qatar and on the streets of Iran after the match,” said Touraj, an Iranian fan from the northern city of Rasht, who declined to use his full name out of fear of retribution by the government.

Read on for more about the Iranian protests and how Iran’s team has handled questions about the human rights situation in their home country.

What is the Iranian protest movement about?

The protests were sparked by the September death of Mahsa Amini, a 22-year-old woman who died in the custody of the country’s morality police after they arrested her for what they considered inappropriate dress. Amini was Kurdish, a marginalized minority group in Iran, and was known to friends and family by her Kurdish name, Jina.

Since September, hundreds of thousands of Iranians have participated in the protests. And the demonstrations have grown beyond calls for greater freedom for women; now, many protesters are demanding regime change.

“I want a future. I want happiness. I want a good life. I want a good home, good car, good – I don’t know – husband, maybe. I cannot have [a] better future in this country in this situation,” a 19-year-old Iranian student told NPR this month. She asked to remain anonymous out of fear for her safety.

“This is a very clear message from people in Iran. This is why many Iranians prefer to call these protests a revolution, because for them, the Islamic Republic has no credibility,” Asieh Amini, an Iranian poet and activist who lives in exile in Norway, said in an interview with NPR.

How has the Iranian government responded?

Iranian leaders condemn the protests as riots, noting police stations have been burned and police killed. They’ve claimed the protesters are stirred up by the US, or Israel, or by Kurdish groups in neighboring countries.

The government has also tried to end the protests using force.

At least 450 protesters have been killed since mid-September, according to an advocacy group tracking the crackdown called Human Rights Activists in Iran🇧🇷 That number includes dozens of children, the group says.

Amnesty International says it has recorded the names and details of over 300 people killed. “Investigations into the identities of those killed continue, with the true death toll believed to be far higher,” the group said last week.

This month, authorities began holding trials for protesters. At least 20 are reportedly facing the death penalty.

“They’ve been taken by surprise by the breadth and defiance and the depth of this protest movement,” said Nahid Siamdoust, an Iranian-born professor of Middle East and media studies at the University of Texas at Austin. “I think it is one of the – if not the – most challenging uprising against the Islamic Republic.”

What about the international community?

There’s been wide condemnation of the government’s treatment of protesters. In October, a group of human rights experts at the United Nations formally condemned the crackdown.

And last week, the UN Human Rights Council voted to open an independent investigation into Iran’s handling of the protests. UN officials have called on Iranian authorities to refrain from using violence, release details and end the use of the death penalty.

“You can imagine how much it pains me to see what is currently happening in Iran with what we can only describe as a very serious human rights crisis,” said UN human rights chief Volker Türk.

The Biden administration has expressed support for the protesters and imposed new sanctions on Iranian security officials involved in the crackdown. And where the White House had once hoped to revive the Iran nuclear deal, those talks have now stalled out as the world focuses on the protests.

“What the United States wants is a government in Iran that is respectful of the fundamental rights of its people – because they want to be able not to wear a headscarf or to live their lives in ordinary ways, and yet they face an oppressive system, ” said Robert Malley, the US special envoy for Iran, in an interview with NPR last month.

The players on Iran’s national team sang for the anthem at their second match of the tournament, reversing course after their silence in their opening match against England.

The players on Iran’s national team sang for the anthem at their second match of the tournament, reversing course after their silence in their opening match against England.

Has Iran’s World Cup team said anything about the protests?

Some players have spoken out.

Before the first game, team captain Ehsan Hajsafi offered condolences to the families of protesters who had been killed and alluded to the death of a 9-year-old boy whose family says he was killed by state security forces earlier this month. And the Swedish-born midfielder Saman Ghoddos spoke about the protests in a pre-tournament interview with The Athletic. “What the people want is nothing special — it’s just freedom,” he said.

Perhaps most prominently, at the team’s opening game against England, all of Iran’s players declined to sing the national anthem in what was widely seen as a show of solidarity with protesters.

But in recent days, Iran’s players have seemed to pull back and repeated the line that their focus is football, not politics.

At a press conference last Thursday, Iranian striker Medhi Taremi seemed to play down the significance of their choice to not sing the anthem. “Unfortunately, there are a number of our fans who understand things the way they want to understand it,” Taremi said. (The team sang the national anthem at their second match, disappointing some Iranian fans in the crowd.)

Taremi also seemed to endorse Iranian state media’s explanation for the team’s 6-2 loss to England – that questions about the anti-government protests had distracted them from their focus on the game.

How do Iranians feel about their team?

But this year, protests have divided support for the team back home — some say the players haven’t done enough to support the protests.

Some protesters called for a boycott after players met with Iran’s right-wing president Ebrahim Raisi before departing for the World Cup. State media has portrayed the players as loyal supporters of the regime.

Iranian athletes who speak out against the regime have long faced the risk of retribution when they return home. Just this month, Iranian authorities arrested a former member of the national soccer team who had long been an outspoken critic of the government. Dozens of Iranian athletes in various sports have defected from Iran over the years.

“They are risking what they’ve worked for their whole life just by not singing the national anthem,” Siamdoust said.

Other Iranian athletes have appeared to make statements only to later apologize. Human rights advocates have raised concerns about athlete safety and questions about whether their apologies were made under duress.

Last month, the Iranian rock climber Elnaz Rekabi apologized on state media after she had appeared in a competition in South Korea without a hijab, which the regime requires of female athletes. This month, an Iranian archer named Parmida Ghasemi appeared to allow her hijab to slip off during a ceremony in Tehran; she later apologized and said it was an accident.