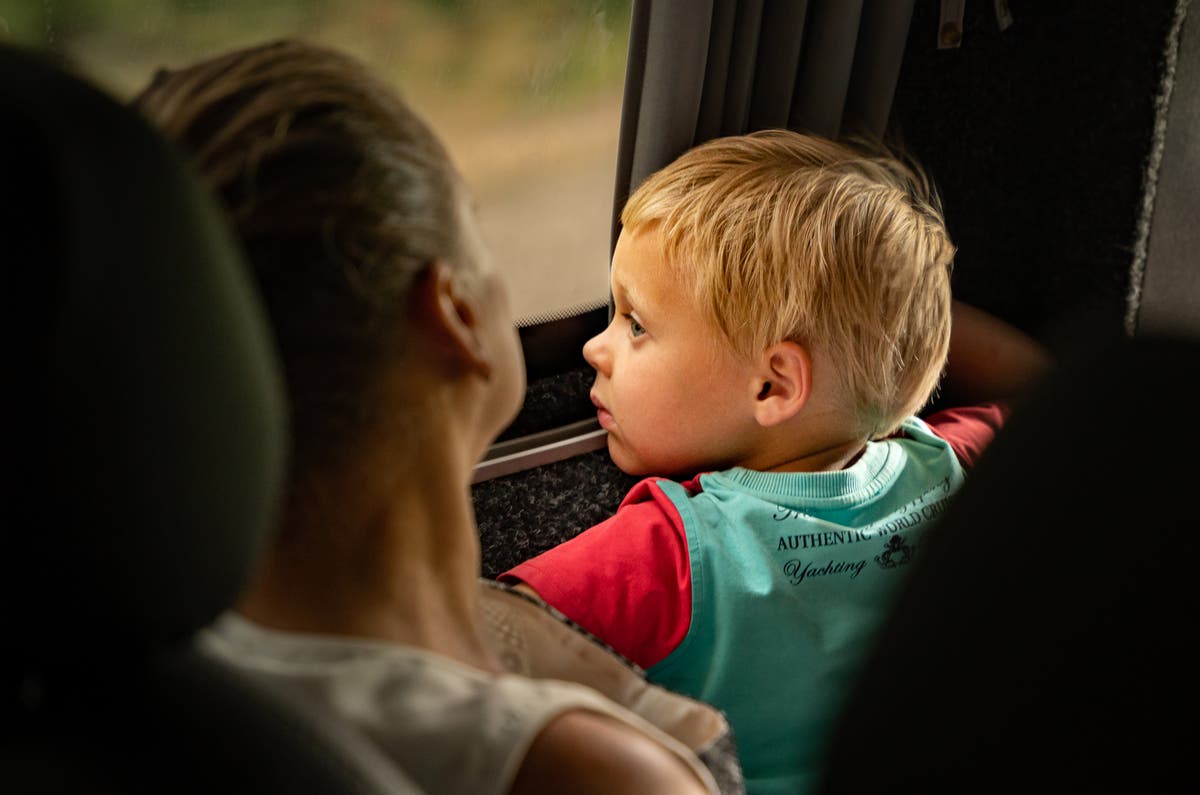 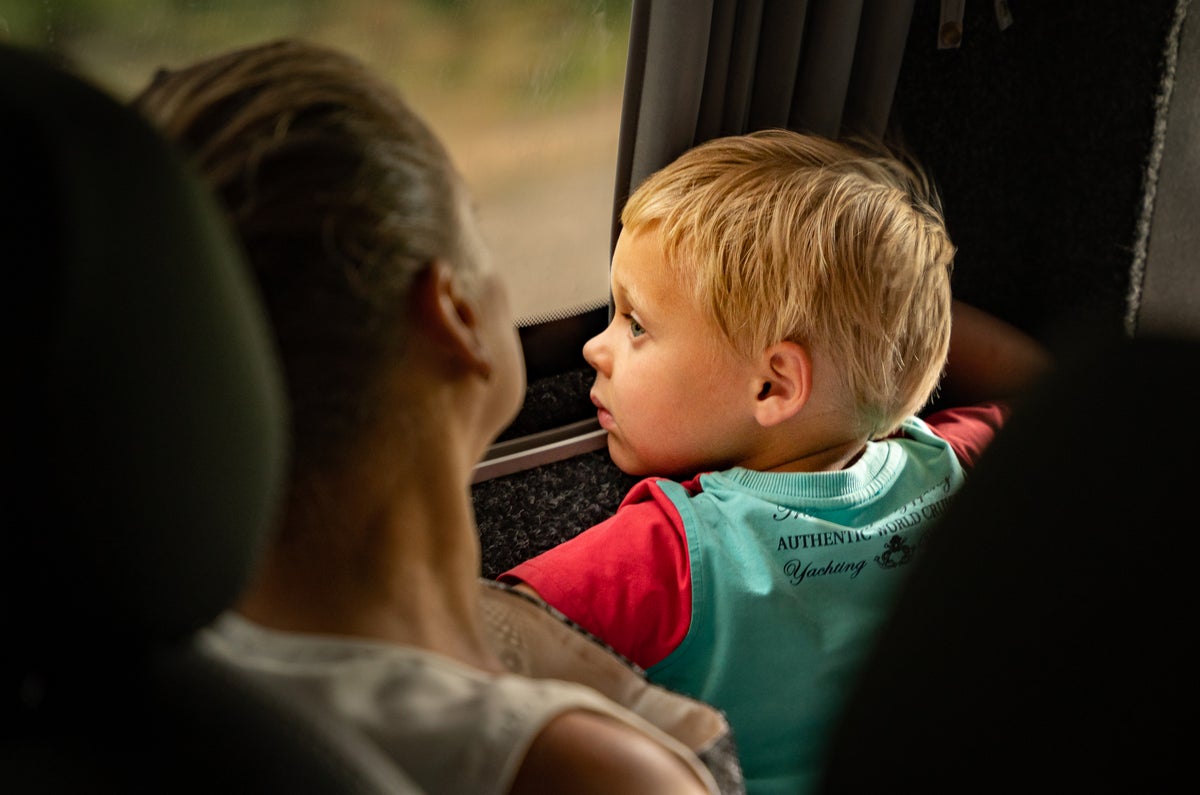 IIt is among the most dangerous jobs in the world: playing a cat-and-mouse game with artillery fire to retrieve vulnerable civilians from the deserted no man’s lands.

But the volunteers now running evacuations from Ukraine’s fiercest front in Donbas, say if they don’t do the work, no one will.

On board a convoy of seven buses from Slovyansk, now a frontline city in Ukraine’s eastern region of Donetsk, chief coordinator Serhiy Naumenko, 29 explains his team of around 20 drivers have been fired at dozens of times while doing their work.

His organization – a Christian charity called “Peace for People” – started on the first day of the war pulling civilians out of Bucha and Irpin near the capital Kyiv, then shifted north to the besieged city of Chernihiv before more more recently switching to the eastern front in Luhansk and Donetsk, collectively known as the Donbas.

Today’s journey is tense, Serhiy is picking up 100 residents from Slovyansk, where Russian positions are apparently just a few kilometers away and where the central market had been badly shelled the day before. Kramatorsk, one city down, which we pass through is also under fire in this ferocious artillery fight. The majority of those on board are families and the elderly who cannot flee without this help.

“We have rescued thousands of people from across the country. Artillery, mortars, gunfire. Our teams have come under fire from it all,” continues Serhiy, a father-of-two who before the war ran an online toy shop.

“It’s a completely different life to what I had before but it is important. I have no plans to give up. We will keep doing this until we are not needed any more.”

“Even then, if there are no people to rescue, we will switch to delivering humanitarian aid. We won’t stop.”

Serhiy’s convoy was one of at least three initiatives running emergency civilian evacuations that day alone from Slovyansk, which has become the focus of Putin’s troops. The majority of those being transported were elderly, infirm and disabled.

In the last few weeks Russia and the forces it backs have captured the Luhansk region, after the Ukrainian military admitted they were outgunned. k With an eye on seizing the whole gateway region of Donbas, Moscow’s men have now pushed into neighboring Donetsk, where governors are now urging civilians who have stayed put to immediately leave.

And so local authorities, charities and churches have banded together to get the most vulnerable to safety.

On the bus the civilians being rescued say the shelling of Slovyansk has intensified over the last few days, and without electricity, water and gas they frantically called the city council for any news on help getting out. Food and fuel prices have tripled, most cannot afford to eat.

Their stories are terrifyingly random. Ludmilla, 43, a mother-of-two traveling with her elderly mother, says her parents are only alive because they happened to be out for dinner the evening their house was leveled by shelling recently.

The final straw for her was the targeting of a central city marketplace which struck the day before the convoy arrived. She left her husband and father behind her, who need to guard one of the few assets they have: the family car, which they can’t drive out of the city as there is no fuel.

“My husband said I had to take the children and leave,” she explains, balancing her three-year-old on her knee.

“Leaving him behind feels like I’ve left a part of myself there, my own spirit. But it’s impossible to feed small children by cooking on a camp fire. It is a matter of our children’s lives, of our parents’ lives.”

Teenager Vlad, 19, whose mother is a surgeon and so stayed in Slovyansk to tend to the wounded, says the shelling took out his friend’s home just one door down. The aspiring student is now traveling alone with his two six-year-old twin brothers, one of whom, Kostia, has severe learning and speech difficulties making the shelling particularly distressing and dangerous.

“Sometimes Kostia doesn’t understand when we need to go to the shelter, and doesn’t want to,” he says as he tends to the two boys who are playing on a mobile phone.

“There is also no water, gas or electricity. All we can do is barbecue on the streets.”

This convoy was a success, it was a comparatively quiet morning along the route. The day after, shelling hit the center of Slovyansk and Kramatorsk.

Clear from the worst of the danger the convoy crawls through Pokrovsk, a town further south west that has become the region’s main evacuation hub.

There, trains ferry the elderly, infirm and injured to the comparative safety of the West of the country.

On board is a blind pensioner, Mikhola, 66, who had been brought in an ambulance from Hirnyk village, which is just eight miles from the eastern frontline and fourteen to the Russian-backed separatist controlled regional capital, Donetsk.

He explains how he is only alive because of a last minute decision to take an afternoon stroll out of his neighborhood which was promptly bombed behind him.

“As I left there was more shelling which killed one of my friends,” says the former cemetery security guard, who is completely blind in one eye and only partially sighted in another, from an infection he picked up before the war.

His condition also impacts his brain function and so he needs daily injections, which are increasingly hard to find under a constant hail of artillery.

“It’s terrifying. I rely entirely on my friends because I can’t see. When there is shelling my neighbor would come and take me to a nearby shelter.”

He sits next to a man called Valerie, who had been ferried from Soledar town, which is north of Donetsk city and stuck in the middle of a different frontline between recently Russian Ly capturedsychansk and Bakhmut. Valerie’s wife Katya who is paralysed has to be lifted on a stretcher by medics to the train.

Valerie is too dazed to explain in detail how they managed to escape given his wife’s condition but explains they fled under heavy shelling.

“We got out two days ago,” he says faintly.

Across town, another group of civilian volunteers also run an evacuation charity founded by 21-year-old German citizen Andrei West, who before the war had barely left Hanover where he is from.

The armored vehicle mechanic came to Ukraine initially to join the foreign legion, but without combat experience he switched to evacuating civilians as he realized it better matched his skill set.

Their organization called “Technical Aid Ukraine Search and Rescue” or TAU SAR for short, has evacuated over 250 from some of the most difficult areas of Donbas, focusing on the often forgotten smaller villages and rural communities. Andrei himself has been shelled around five times, including one near direct hit, the impact of which is etched into his car window screen.

In another instance, while they were trying to evacuate 18 civilians from an area just south of now-occupied Lysychansk, he says he believes they were deliberately targeted.

“A Russian drone flew overhead and then all of sudden the shells came at us, all around. We were three civilian cars,” he continues, leaning against one of his five battered vehicles. They are all out of service right as they have been damaged in their rescue efforts. They lack the funds to repair them.

“We meet people who haven’t received any help or aid for eight years. You give them bread and they cry. When you see that you ask yourself, how can we stop doing this?”

But the work has taken a heavy mental toll on the team of ten drivers, who before the war were students and mechanics. Some of them show signs of Post Traumatic Stress Disorder, including hallucinating explosions which aren’t there during the middle of the day.

“We try to rotate the teams, two weeks on, two weeks off but it is not enough to really recover,” he adds with a nervous smile.

“I have quit my Western life for this. I’m not sure why. It’s hard to stop doing this.”

Back on the Slovyansk evacuation bus, the families now out of the worst danger zone start to come to terms with leaving everything behind.

They have no idea if they will ever be able to return home. Many have left loved ones in the city.

“It’s a mess, it is hard to make sense of this nightmare, and now we fear there will be nothing left to go back to,” says Larissa, 55 in tears, clutching a small bag of essential belongings she managed to bring with her .