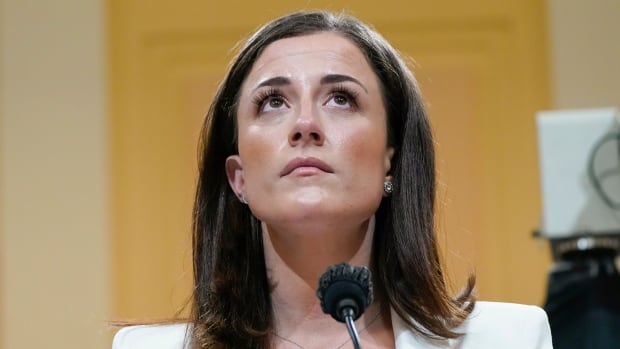 Around 1 pm ET Tuesday inside the Caucus Room of the Cannon House Office Building, near the US Capitol, the murmuring among the roughly 70 spectators and 100 journalists quieted down as an ex-aide to Donald Trump’s former chief of staff entered through the back doors and sat at the witness table, where hovering photographers snapped away.

Journalists were squeezed into the 10 assembled tables for the abruptly called hearing by the House panel investigating the Jan. 6 riot. Last week, it was announced that there would be no more hearings until July. But on Monday, the panel unexpectedly said it was convening a hearing to present “recently obtained evidence and receive witness testimony.”

That witness was Cassidy Hutchinson, who made a series of startling claims, including that, on Jan. 6, the then-president was informed that people rallying nearby that morning had weapons but he told officials to “‘let my people in'” and march to the Capitol.

Yet despite her headline-making testimony, and other revelations from the hearings, so far it seems unclear how much of it is resonating with the American public, or changing minds.

“The evidence of impact at the hearings thus far is hard to come by,” said William A. Galston, a chair and senior fellow of governance studies at the Brookings Institution.

The first night of the hearings, the panel laid out the beginnings of its case against Trump — that his lies about the 2020 election and his pressure on Vice President Mike Pence to overturn it directly led to the violence on Jan. 6, 2021.

Those hearings were televised on prime time, and drew an audience of about 20 million people, equivalent, as The New York Times pointed out, to television events like a big Sunday Night Football game.

But by the second hearing, broadcast in the afternoon, the audience had dropped by nearly half to 11 million. That followed to nine million the third day.

The committee has heard from a number of Trump’s former top aids, and Republican after Republican, who have said they told Trump they didn’t believe his claims of election fraud.

It’s heard testimony from former attorney general Bill Barr, presented through a video recording, that revealed he had told Trump there was no evidence of voter fraud, that he didn’t agree with the idea of ​​saying the election was stolen — yet in Trump, said Barr, “there was never an indication of interest in what the actual facts were.”

The hearings also heard about a plan by conservative lawyer John Eastman, which he presented to Trump and which aimed to reverse Joe Biden’s election victory.

As well, the hearings heard that Trump hounded the US Justice Department to pursue his false election fraud claims, contacting the agency’s leader “virtually every day” and striving in vain to enlist top law enforcement officials in a desperate bid to stay in power.

But an ABC News/Ipsos poll found that only 34 percent of Americans are following the hearings somewhat or very closely, with only nine per cent following it very closely.

The poll also revealed that, of those following closely, 43 percent are Democrats and 22 percent are Republicans.

“I think it also shows that the Jan. 6 committee is not really having an impact among Republicans,” said Chris Jackson, a researcher for Ipsos.

A Quinnipiac University poll found that a majority of Americans say they are following news about the committee very closely (26 per cent) or somewhat similarly (32 per cent). About 41 per cent said not so closely (17 per cent) or not closely at all (24 per cent).

Galston says taking into account these and other polls, he concludes that most people watching the hearings are Democrats and that relatively few Independents and Republicans are following.

Former White House aide Cassidy Hutchinson says Donald Trump knew people on Jan. 6 had weapons, but he wanted them allowed into his rally since he wanted a large crowd.

But while Republicans may not be watching the hearings, they are hearing about them, he says.

“And what they’re hearing is not good.”

The hearings have also been peppered with moments of emotional testimony, including that of Arizona’s Republican state House Speaker Rusty Bowers, who talked about the threats he and his family had to harden for recognizing that Joe Biden won the state.

Wandrea “Shaye” Moss, a former Georgia election worker, testified that she and her mother faced such severe public harassment from Trump allies they felt unable to live normal lives.

But Brian Gaines, a University of Illinois political science professor, says there may not be as much impact as from, for example, 1973’s Watergate hearings, which took place while Richard Nixon was still president.

“The biggest difference of all is that Trump isn’t the sitting president,” Gaines said.

Former US Attorney General Bill Barr told the House committee investigating the Jan. 6 riot at the US Capitol that he considered early claims of fraud in the November 2020 election to be ‘bogus and silly.’

Back then, the question “How much did the president know?” was “really what made [the Watergate scandal] take off,” he said.

“How much the ex-president knew is just a different question.”

Yet Galston says he believes some Republicans are beginning to worry that the hearings are having an effect on people’s perceptions of Trump and whether he’s the person they want to represent the party in 2024.

“The fact that almost all the witnesses are Republicans, I’m sure, hasn’t escaped their notice,” he said.

Trump himself has pummeled Republican House Minority Leader Kevin McCarthy for his decision not to have more Republicans participate in the hearings.

“Trump is clearly worried that this is having an effect, if not on the Republican Party, on him personally,” Galston said.

Jackson, of Ipsos, says their polls show most Americans believe Trump holds at least a good deal of responsibility for the attack on the US Capitol. Yet he says the hearings may only be having a small impact on those beliefs.