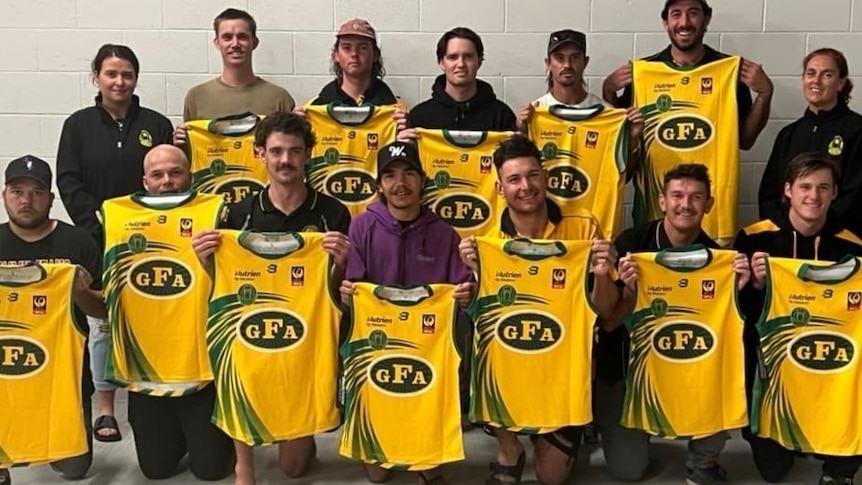 Rivalry runs high in the Gascoyne Football Association’s league of just three teams, but for the first time in more than 25 years, the region’s star players will unite to battle the best of the bush at the 2022 Country Football Championships.

As Round 9 approaches, the Carnarvon Ramblers remain undefeated boasting a percentage of 544.3 — more than eight times that of the Exmouth Eagles in the second rank.

Meanwhile, the Carnarvon’s Warriors club is yet to have a win.

“You probably get a bit over playing the same side week in, week out,” said Fraser Daly of Ramblers Football Club.

Teams play just eight games in the 12-round season as one is forced to have a bye each week.

“But, at the end of the day, people that love footy will play football regardless, and I think that’s the Gascoyne region,” he said.

Having started his football career as a “nipper” in Carnarvon, Daly says “it’s a surreal feeling” to be captaining Gascoyne’s Country Week side.

“It’s something I’ve probably had as a dream of mine to tick off ever since I was a little tacker,” he said.

Fraser’s sister and the Gascoyne Country Week team’s manager Tessa Daly said her brother’s appointment was fitting given he was the competition’s Fairest and Best player last year and has played for the WAFL.

“I think he will be a great leader — without being too biased from a sister’s point of view,” she said.

There was once a fourth team in the Gascoyne’s Senior Competition, but Ms Daly said COVID decimated player numbers and even wiped out the Colts competition one year.

Ms Daly said about three years ago, a new Gascoyne Football Association committee formed with a powerful vision to rejuvenate football in the Gascoyne by sending a Country Championships side.

Despite nay-sayers and the financial hurdles, Ms Daly says the committee has given young players something to look forward to.

“We want football to continue to happen, so the more people we can get to team together and work together, I think that the greatest football will be in the Gascoyne,” Ms Daly said.

“Hopefully in the years to come, we can build it back up to a four-team comp, or even possibly go to the five-team comp,” Mr Daly added.

A region of ‘unreal’ talent

The Country Championships will be the highest level of football some will ever get the chance to play as they bump shoulders with ex-AFL and ex-WAFL players, Ms Daly said.

There’s also the opportunity for players to be chosen for the State Country Championships in Adelaide later this year.

“It’d be awesome if we had a Gascoyne rep pull on the jumper for them,” she said.

“The talent that we’ve got is unreal in the Gascoyne region and we’ve definitely got a few eye-catchers to look out for,” Mr Daly said.

“I think we’ve probably been neglected a bit throughout the regions but hopefully, this can prove to the big-wigs down in the city; don’t skip the Gascoyne region,” he said.