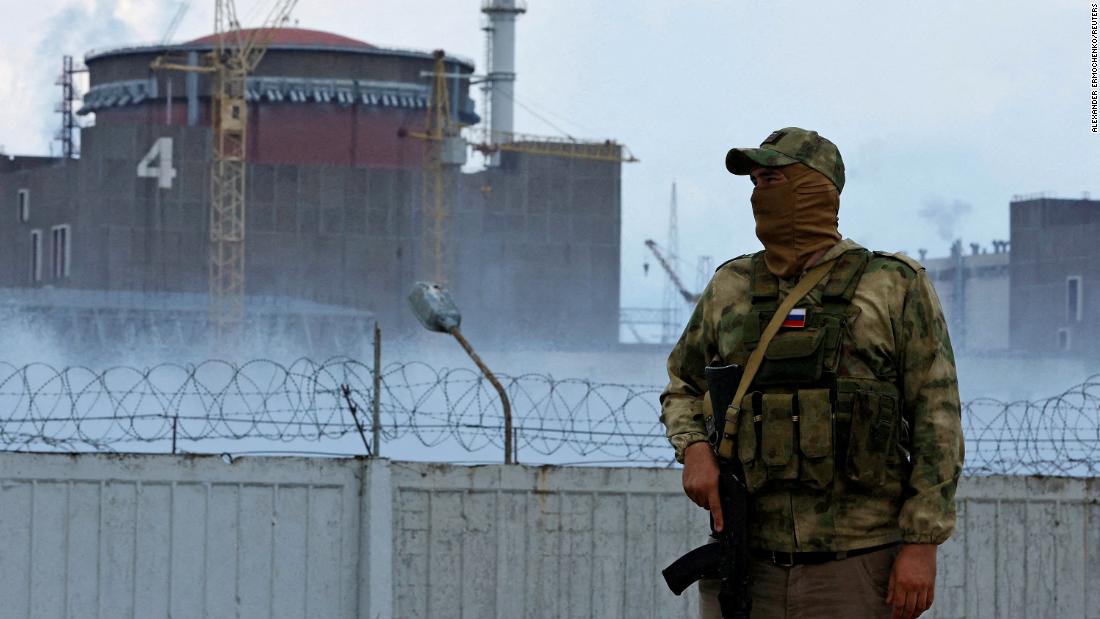 She had kept working at the Zaporizhzhia complex for months after it was stormed by the Russians in March, among hundreds of Ukrainian workers effectively kept hostage to enable the power station — the largest nuclear power plant in Europe — to keep running.

But eventually, the constant explosions and fears for her young son’s life made her take the risk to leave.

CNN agreed to use only Elena’s first name out of respect for her safety concerns.

The Ukrainian plant has accused the Russian troops of using the as a shield, and risking serious damage or a potential disaster at the plant. In response, the Kremlin has repeatedly claimed Ukrainian forces are shelling the plant.

Ukrainian President Volodymyr Zelensky said during an address to the UN Security Council on Wednesday that Russia had “put the world on the brink of radiation catastrophe” by turning the plant into a “war zone,” and called for demilitarization of the plant.

“At night (the Russians) are firing somewhere behind the reservoir,” Elena said. “There are many, many explosions at the same time, like big cars firing.”

Fears about the consequences of the actions of Russian troops around the plant have hastened an exodus of workers.

“For the last two weeks, there has been a crazy outflow of staff,” said Daria, an employee who is still working at the nuclear plant. CNN agreed not to use her real name in light of her safety concerns. “We have people leaving en masse, dozens of them, in packs.”

Elena said employees at the plant are terrified of the Russian troops based there, as they walk around with machine guns and, at night, often “get drunk and shoot in the air.”

“A man was killed there just before I left. That’s why we left,” Elena said.

Three Ukrainian plant workers have been killed by the Russian military since March by beating or being shelled, and at least 26 others have been detained on accusations of leaking information, Ukrainian Parliament Commissioner for Human Rights Dmytro Lubinets said on Wednesday.

For those who remain at the plant, the situation is “getting worse with each day,” Petro Kotin, the president of the Ukrainian state-run nuclear power operator Energoatom, told CNN.

“It is a very difficult situation,” Kotin said. “They are heroes actually, continuing working on these conditions in the plant.”

Kotin said Russian forces had placed 20 trucks in two turbine halls, as revealed in a recent leaked video that was verified by CNN.

“We believe there (are) explosive materials inside these trucks,” Kotin said. “And that is very dangerous.”

A potential fire could spread to the nearby reactor, because the entrance to the fire brigade is blocked, he said.

He believes that the Russians will attempt to switch the output of the Zaporizhzhia plant from the Ukrainian power grid to the Russian network, a process that would involve a “full shutdown” of the plant using diesel generators to cool the reactors. Such an operation would be highly dangerous, he said.

On Thursday, the plant was completely disconnected from Ukraine’s power grid for the first time in its history, according to the country’s nuclear operator, Energoatom. It said fires at nearby ash pits had caused the last remaining power line connecting to Ukraine’s energy grid to disconnect twice, adding that the “actions of the invaders” were to blame.

The Russian-installed regional governor later said work was underway to restore the power supply to the region. He in turn blamed Ukrainian military action for the outages.

The growing dangers of working at the plant have added to the psychological pressure on the skeleton staffing left behind. Plant employee Daria said only 10-15% of staff now remain in her department, who live day-to-day in a “state of powerless anger.”

“Mentally it’s already very hard,” Daria said. “But I don’t know when and how we will leave.”

Daria said the technical staff at the plant are “doing the impossible” to keep it running without incident, but she added that the world “has no idea how serious everything is, how much everything hangs on a thin thread.”

“The human psychological state can lead to accidents,” Daria said. “At plants like ours, it’s not really the equipment that is to blame. What matters here are people, their decisions, their reactions to signals, to any violations, to any damage.”

The IAEA is currently working with Russia for an urgent inspection of the nuclear plant to assess the safety of the operation. But Daria said she thinks “nothing will change” even if this happens.

“My only hope is the Ukrainian army,” Daria said, but she fears what the Russians will do if they arrive. “They are so fond of saying ‘we will destroy you,’ and they already have their orders for that. That’s why people leave.”