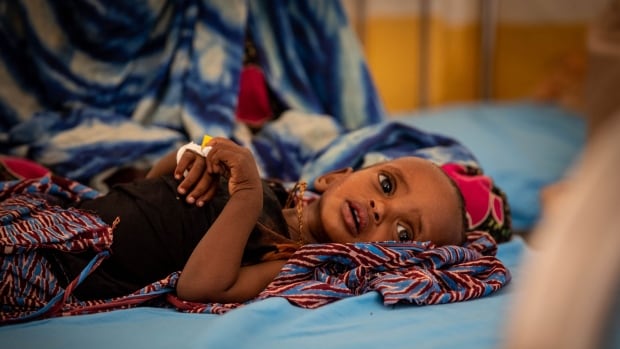 It’s morning at a hospital in Dolow, Somalia.

Inside the stabilization centre, a ward where malnourished children are given specialized treatment, there are no free beds.

Mothers sit vigil over their babies. They fan the sleeping with scarves, rearrange the delicate limbs of the fitful and urge the most alert to take sips of formula.

At the bedside of one-year-old Miida, Dr. Abdulaziz Osman gingerly lifts her frail arm, feeling for a pulse. She’s suffering, like so many other children here, from severe acute malnutrition.

It’s her third time here, but return visits are not an uncommon occurrence, the doctor says.

Her mother, Fadumo, lifts a cup of formula to Miida’s lips, willing her to drink, but she rejects it with the little energy she has in her body. The doctor will have to make a decision today about whether the child will need to be put on a feeding tube.

While much of the world’s eyes have been focused elsewhere this year, Somalia has slipped deeper into crisis. A famine is knocking.

The country is in the midst of its fifth failed rainy season, resulting in the worst drought it has seen in nearly half a century. It has decimated the crops and farm animals so many Somalis rely on for their livelihoods.

Other countries in the Horn of Africa have also been hard hit by drought in recent years, but none seem to be charting quite as catastrophic a course as Somalia, where the extreme weather brought by climate change is further compounded by conflict.

Al Shabaab, the militant Islamist group known for suicide bombings and other attacks within Somalia and neighboring countries, controls large swaths of the country, making access to entire regions dangerous and difficult for aid groups.

Mass displacement caused by drought and violence has forced thousands of refugees to make long journeys to crowded camps like those in the Gedo region, near the border with Ethiopia.

People arrive with next to nothing — one mother told us the only precious things she had left were her children.

When we met 60-year-old Abdullahi Hassan, he was watching over four of his grandchildren in a camp for the displaced on the outskirts of Luuq.

Hassan welcomed us into the shelter where the family of eight lives and sleeps. They had been at the camp for two weeks, having left home when rain didn’t come and all their livestock was wiped out.

“We fled when things were out of control,” he said. “We fled for dear life.”

He was worried for his family. He didn’t think they could survive 10 more days if things continued like this. Three-year-old Sowda had a rattling cough, but it was his youngest grandson, Qeys, and his daughter of his who were at the hospital in the town centre, where Qeys was being treated for malnutrition.

“I don’t eat well, since we don’t have much,” Hassan’s daughter Nuuriyo told us at the hospital. “I did not have food to eat, so there were not many nutrients in the breast milk, and there was not enough breast milk for him.”

UNICEF estimates that since August, one child has been sent to hospital for malnutrition every minute in Somalia. The last famine the country endured, in 2011, killed more than a quarter of a million people, half of them children.

Humanitarian organizations operating in the country have been sounding alarm bells for months, and while a famine has yet to be officially declared in 2022, those working on the ground say waiting on the statistics is a waste of precious time.

“If any lesson was to be learned from 2011, if you’re arguing about whether it’s famine or not, you’re already too late and people are dying,” said Paul Healy, Somalia country director for Trócaire, the Irish charity running the stabilization centers and other outreach programs in the Gedo region.

“People’s lives are being lost, children in particular, and worrying about whether the data is up to scratch is not good enough, because you won’t get the data in some of the most hard-to-reach [places] and the areas that are suffering the most.”

The day after we first visited the stabilization center in Dolow, we returned to check in on Miida.

A feeding tube had been attached and Dr. Osman was again by her bedside her. Miida had been weakened from vomiting and her care team was still trying to treat the dehydration and pneumonia wreaking havoc on her body.

In the end, Miida’s defenses were too degraded and the complications too many. She died a day later.

Osman is worried Somalia is being forgotten. He said more help is needed from the international community to grow resilience in the face of drought and prevent children from going hungry in the first place.

“We are focusing on treating these children, but if you don’t deal with the root causes, the vicious cycle will continue.”

WATCH | Drought threatens the survival of millions in Somalia:

Somalia has missed its fifth rainy season in a row, forcing many to abandon their farms. More than seven million people are facing food insecurity in the country.

With files from Margaret Evans