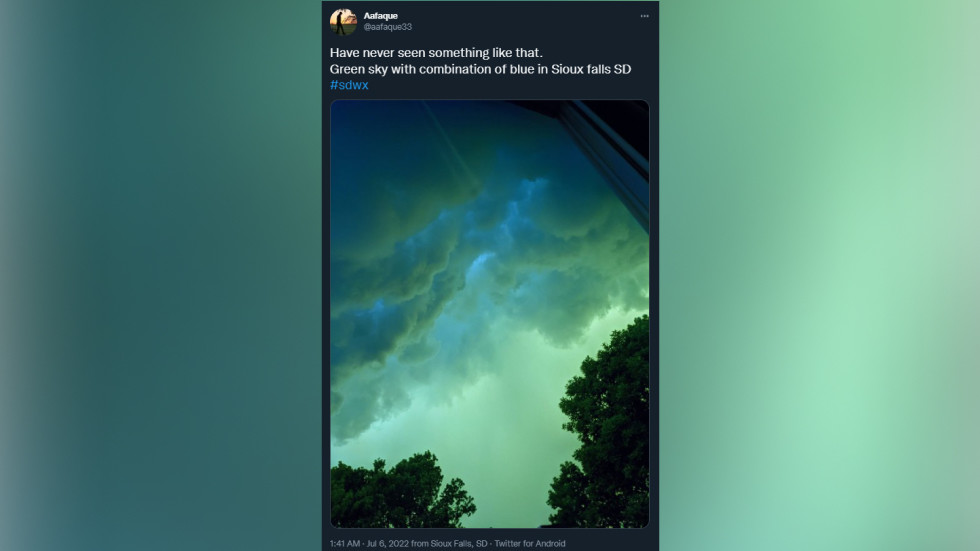 Skies over Sioux Falls, South Dakota turned an eerie shade of green on Tuesday night as a strong storm known as a ‘derecho’ rolled through the state. Onlookers posted videos and photos on social media showcasing the unusual weather phenomenon.

According to the National Oceanic and Atmospheric Administration, a right is a “widespread, long-lived wind storm associated with a band of rapidly moving showers or thunderstorms.”

One such storm passed through South Dakota and its neighboring states on Tuesday, with tornado-like winds reaching speeds of up to 160kph. Before the storm hit, it caused the skies to turn a shade of green, which was captured by both onlookers and traffic cameras.

Sioux Falls, strong winds, hail and stupid people out trying to get home before it hit. Me, I am one of those stupid people but made it home. pic.twitter.com/pGM38Gg77T

As reported by the National Weather Service, the right storm barreled through much of South Dakota, Minnesota and Iowa and reportedly left nearly 30,000 people in those states without power for hours.

While these storms are somewhat common in this region, which is sometimes referred to as ‘the great plains’, the green sky phenomenon is a rare sight.

While meteorologists don’t fully understand why the skies sometimes turn green ahead of the storm, some scientists believe it to be the result of clouds carrying a lot of water that allow only blue light to pass through. Supposedly, the green skies appear when that blue light is mixed with the Sun’s red and yellow light.