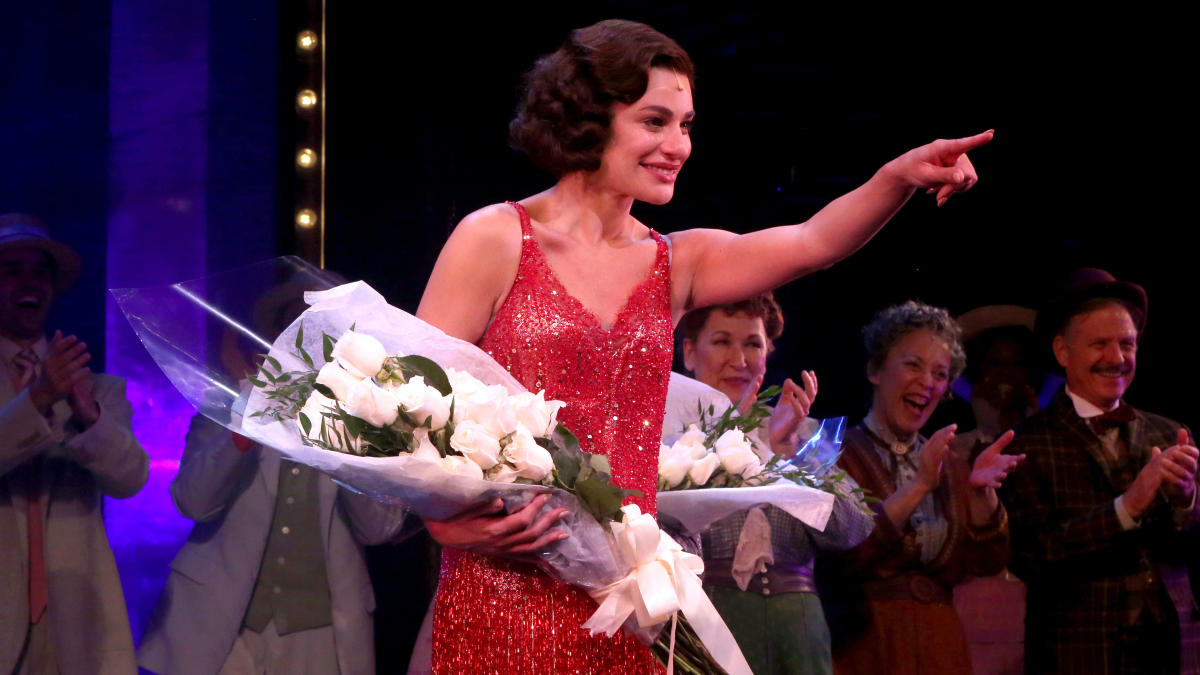 But not even a dreary, drizzly Tuesday in Manhattan could rain on Lea Michele’s parade as the former “Glee” star made her long-anticipated debut in Broadway’s “Funny Girl” revival. Before Michele could sing a note in her crystalline soprano dela, the crowd at the August Wilson Theater leapt to its feet as soon as she appeared on stage, making it difficult to hear the show’s famous opening line, “Hello, gorgeous.” She would receive six standing ovations in all, crescendoing in a final, rafters-shaking round of applause.

It’s been a long time coming for Michele, who has spent a good portion of her career (unofficially) campaigning to embody the incandescent comic and chanteuse Fanny Brice on stage. Her obsession with “Funny Girl” became lore on “Glee,” where her character Rachel Berry regularly belted the musical’s greatest hits — including “Don’t Rain on My Parade,” “I’m the Greatest Star” and “People” — during the show’s six seasons. A public audition tape, of sorts.

And the public — A-list and otherwise — turned out in force. In addition to a full house of Gleeks, the audience included Michele’s BFF and one-time “Spring Awakening” co-star Jonathan Groff (who looked positively ecstatic every time the actress was on stage, rocking back and forth rhythmically, sobbing at various points , and jumping up to lead each ovation), her old “Glee” boss Ryan Murphy, Zachary Quinto, Drew Barrymore, Harvey Fierstein (fresh from delivering yet another polish on the show’s sometimes creaky book) and producer Jordan Roth, resplendent in a flowing , animal-print jacket. The audience was clearly on Michele’s side of her and it’s unlikely she will ever perform in front of another crowd as eager to see her soar.

“We’re Gleeks first, humans second,” says 24-year-old Julianna DeAngelis. “I grew up listening to Lea Michele singing ‘Don’t Rain on my Parade.’” She and her theater companion Fiona Castro say they each spent $250 to experience the second coming of “Funny Girl.”

“We would have definitely spent more,” Castro, 24, added. “It’s a moment of history given everything that has gone on with the revival.”

And there’s been plenty of headlines to sift through regarding “Funny Girl” in the last year. When the production mounted its Broadway return for the first time in nearly six decades, it did so with “Booksmart” actor Beanie Feldstein, not Michele, in the title role as the Ziegfeld’s Follies star who has the misfortune to fall for the wrong man. Yet Feldstein’s performance was met with lackluster reviews, little Tonys love and difficult comparisons to Barbra Streisand’s career-making performance. The withering notices prompted rumors that Michele was being eyed to take over the marquee role in a bid to boost ticket sales. And once Michele’s casting was confirmed, Feldstein left “Funny Girl” two months early, citing the producer’s decision to “take the show in a different direction.”

There have also been detractors to Michele’s grand return to Broadway. She stepped back from the spotlight in 2020 after former “Glee” co-star Samantha Marie Ware was largely accused of “traumatic microaggressions” that fostered a toxic set. Michele later apologized for her “her behavior and for any pain which I have caused.”

But on Tuesday, for the first time in several weeks, the drama around the musical mostly played out on stage.

Ramin Karimloo, who plays Fanny’s hunky love interest Nicky Arnstein, is one person who has managed to steer clear of the off-stage messiness.

“From what I’m gathering, because I didn’t grow up with ‘Funny Girl,’ this show has inspired a lot of people, and it’s something that’s usually on their mind for a long time,” he told Variety ahead of opening night. “I know nothing about ‘Glee.’ I knew nothing about Lea leading up to this, so to hear her sing for the first time was extraordinary.” As for Michele’s take on Brice, he praised the way “she wanted to dive into the romance,” adding, “it’s so effective.”

There’s one song that will bring the audience to its feet, he correctly predicted. “Come on … she blows the roof off with ‘Don’t Rain on My Parade,’ which I guess she’s sang on that show that everyone talks about,” he says. “The way she sings makes me dance.”

At intermission, the crowd was buzzing about Michele’s vocals and the overall energy in the room. After the curtain came down on Michele, who tearfully accepted a bouquet of white roses as she waved goodbye to the audience, fans flocked to the stage door to get a final glimpse of the star. There, Michele signed Playbills and posters amid a crush of well-wishers.

For Marlenn Sabbagh, a 21-year-old theatergoer, the evening certainly lived up to her expectations.

“It was the best theater experience I’ve ever had, and I’ve been going my whole life,” said Sabbagh. “The audience was incredible. The energy was so good. I never cared about Justin Bieber growing up. This is my Justin Bieber concert.”