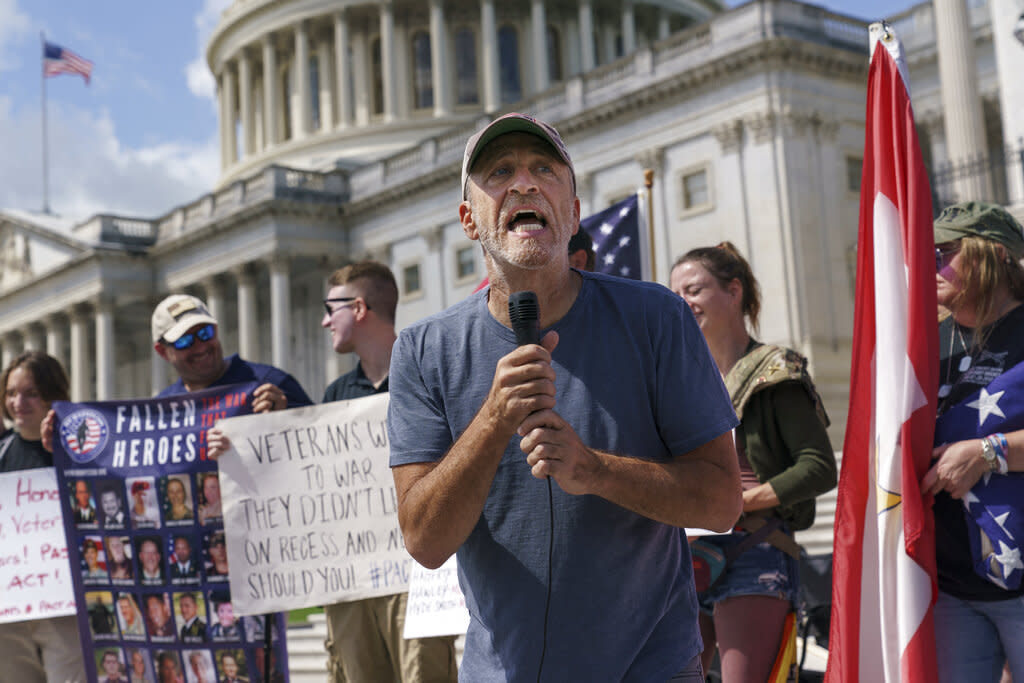 The Senate passed legislation to extend health and disability benefits to millions of veterans exposed to toxic burn pits in Iraq, Afghanistan and other areas of military engagement.

The 86-11 vote came after Republicans blocked the legislation last week, with a number of the lawmakers having previously supported it when it came before the Senate in June.

Jon Stewart, a longtime advocate for the veterans, blasted the opposition, speaking at rallies on Capitol Hill multiple times over the past week and making a series of media appearances on network Sunday shows, Fox News and Newsmax. Stewart was in the chamber for the Senate vote, and hugged veterans after it passed.

The bill, the Honoring Our Promise to Address Comprehensive Toxics Act (or the PACT ACT), is designed to address the inability of veterans to access healthcare as they reported a range of illnesses. It now goes to President Joe Biden for signing.

The military has used burn pits to incinerate waste, hazardous material and jet fuel, but troops that have breathed toxic fumes have suffered respiratory illnesses and cancers. President Joe Biden has suggested that the brain cancer that killed his son Beau, may have been linked to his exposure to burn pits when he served in Iraq and Kosovo.

Last week, when the legislation failed to get the 60 votes needed to advance in the Senate, Stewart chided Republican lawmakers who voted against it. On Thursday, he appeared with one of the bill’s chief sponsors, Sen. Jon Tester (D-MT) and other lawmakers, telling reporters, “Ain’t this a bitch? America’s heroes, who fought in our wars, outside sweating their asses off, while these mother-f—ers sit in the air conditioning, walled off from any of it.”

The legislation looked to be on its way to receiving substantial bipartisan support until Sen. Pat Toomey (R-PA) urged members this week to vote against it, claiming that the bill contained a budget gimmick to open up $400 billion in spending “unrelated to veterans care.” But Stewart and other Democrats dismissed those concerns. A number of Democrats accused the Republicans of blocking the retribution legislation, given that took place shortly after Senate Majority Leader Chuck Schumer (D-NY) and Sen. Joe Manchin (D-WV) announced a deal on a climate, healthcare and tax reconciliation bill.

While celebrities have for years lobbied for their causes on Capitol Hill, drawing media attention to proposed legislation, Stewart has taken it to another level with his willingness to shame lawmakers into action, even if that means tangling with them on social and other media. After Sen. Ted Cruz (R-TX) claimed that Democrats were playing a “budgetary trick,” Stewart said on Meet the Press that Cruz’s argument was “just a word salad that he’s spewing into his coffee cup on his way to God knows where.” Cruz ended up voting for the bill on Tuesday.

But the attention that Stewart drew to the Senate’s failure to pass the legislation may have had the desired effect of getting under lawmakers’ skins. On CNN, Toomey tried to dismiss Stewart as a “pseudo-celebrity” who tried to “make up false accusations to try to get us to just swallow what shouldn’t be there.”