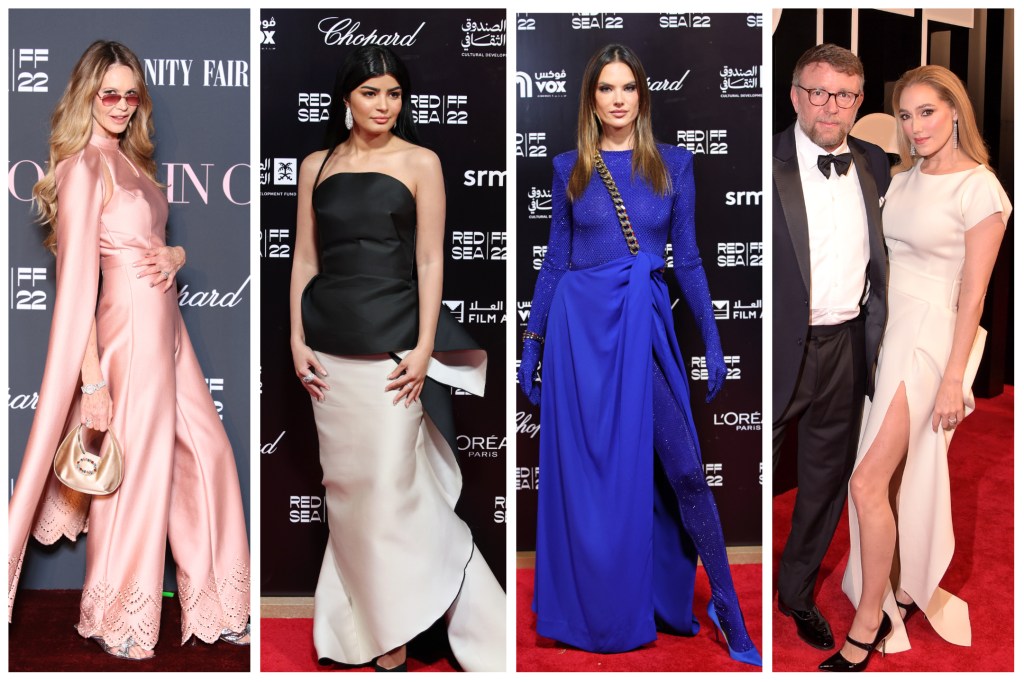 A raft of regional and international celebrity guests has been hitting gala red carpets in local creations, alongside other stars in outfits by long-established luxury brands, in an initiative spearheaded by the country’s fledgeling Fashion Commission.

The campaign comes just three years after the country relaxed ultra-strict dress codes stipulating that women had to wear an abaya and cover their hair in public, as part of reforms to open up society and diversify the economy away from a reliance on oil revenues.

The Miami-based label was created by Saudi Arabian designer Salma Zahran in 2016 and is now in the process of entering Saudi Arabia’s emerging fashion market.

Brazilian model Alessandra Ambrosini put on an appearance swathed in a body-hugging electric blue outfit from Jeddah-born designer Yousef Akbar, who studied fashion in Australia and then set up his own label in 2017.

Elsewhere in the festival, model and businesswoman Elle Macpherson attended Vanity Fair’s Chopard-sponsored Women in Cinema party in a pink jumpsuit by Amarah, a womenswear label launched in 2019 by Arwa AlKAd.

She accessorized with a bag by Dania Shinkar, a London College of Fashion alumna, operating between Saudi Arabia and Ireland.

A dozen other celebrities have also sported local creations on the red carpet in the early days of the festival.

The push to promote Saudi Arabia’s emerging fashion labels on the Red Sea’s red carpet is the brainchild of Burak Cakmak, CEO of the country’s new Fashion Commission, which was among 11 bodies created by the Ministry of Culture in 2021 to kickstart the cultural sector.

Cakmak, whose resumé includes stints at luxury groups Kering and Swarovski, arrived in the role in 2021 from New York’s Parsons School Of Design, where he was Dean of Fashion between 2015 to 2020, with a mandate to build a fashion industry in the country from scratch.

“We’re trying to build the Saudi brands, so they’re getting the same visibility as the international brands operating in the country,” he says. “The idea is to put their pieces on the red carpet alongside all the other international brands so that they’re part of the mix, and they’re being recognized at the same level.”

He and his team have been busy hastily matching local designers with celebrities as the Red Sea’s VIP list came together in the weeks leading up to the festival.

“This kind of engagement is generally ultimately finalized last minute and what’s important is for us and the Saudi brands is to understand the process for being able to provide pieces that are always ready,” he said.

“We created a dedicated suite at the Ritz (the festival’s main hub this year) and we’re in touch with all of the stylists and sometimes the celebrities themselves, depending on the connections that exist between our team as well as the festival and designers .”

“It’s basically managing that matchmaking process and allowing the celebrities to see the pieces virtually and then sending them to their hotels or inviting them to the suite itself,” he continued. “The good thing about the designers in the region is that they’re very used to doing custom, made-to-measure pieces, so they often have their own in-house teams and are able to react quickly.”

The red carpet push in Jeddah is among a raft of initiatives put in place by the commission over the past 12 months, led by the Saudi 100 Brands exhibition, showcasing the work of 80 mainly female designers, which debuted in Riyadh in December 2021, and then traveled to New York this July, followed by Milan Fashion Week in September.

“After one year of engagement, we decided that it was time to start also taking a place on the red carpet but it really needs a concentrated effort to be able to get that attention in a very crowded space,” said Cakcak.

“Clearly fashion and film are very connected. In film, costume matters, but beyond that, we’ve seen with the Met Gala and festival red carpets how fashion is playing a very key role.”

Middle East film festival red carpets have a reputation for over-the-top outfits and bling, but Cakcak suggests Saudi Arabia prefers a more understated elegance and that a result its designers can offer sophistication on par with established fashion brands in Europe and the US

He notes, however, the aim is not only to target international markets and celebrities but also to engage with the Saudi Arabian population and the country’s emerging film industry.

“Saudi is getting into film. And that’s another one of the reasons we were motivated to do this. For me, what matters as much as the international celebrities, is having Saudi film industry people, creators, directors and producers on the red carpet, representing local creators.”

Asked whether he now has his sights on the red carpets of A-list festivals like Cannes and Venice, Cakcak replies: “That’s our absolute ambition to be able to do that.”