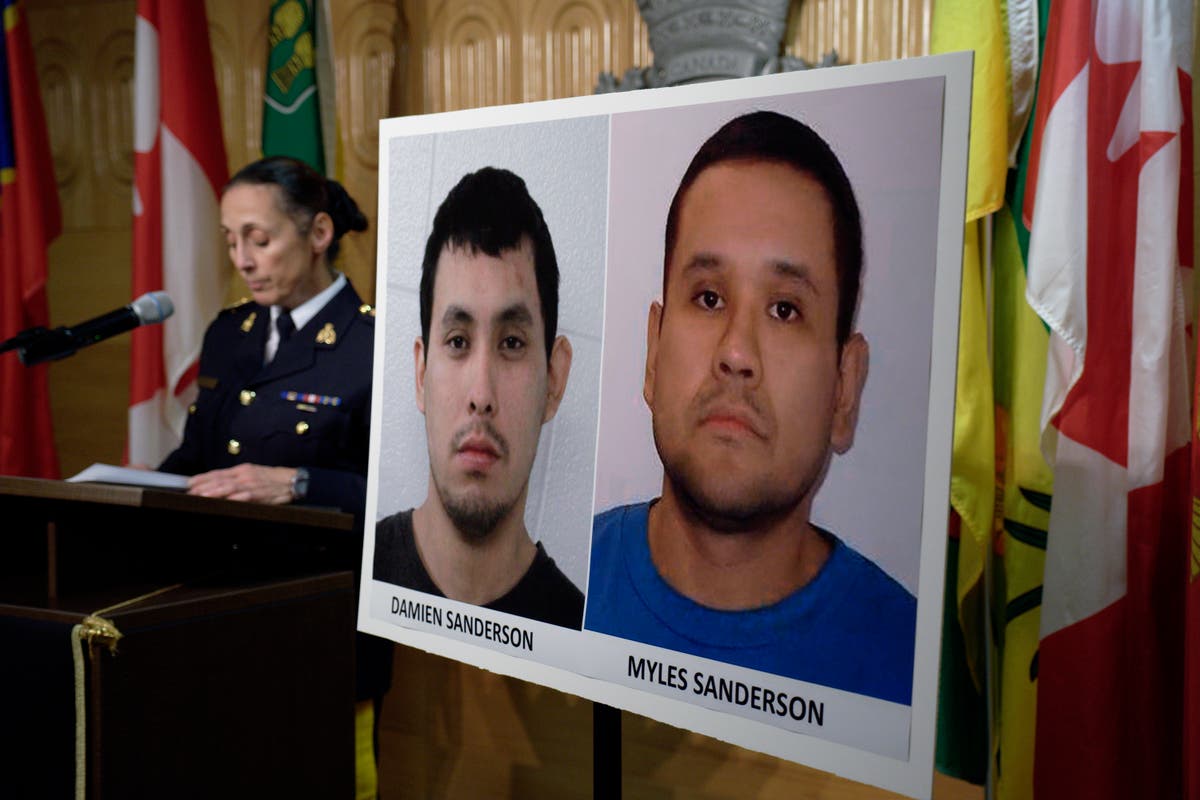 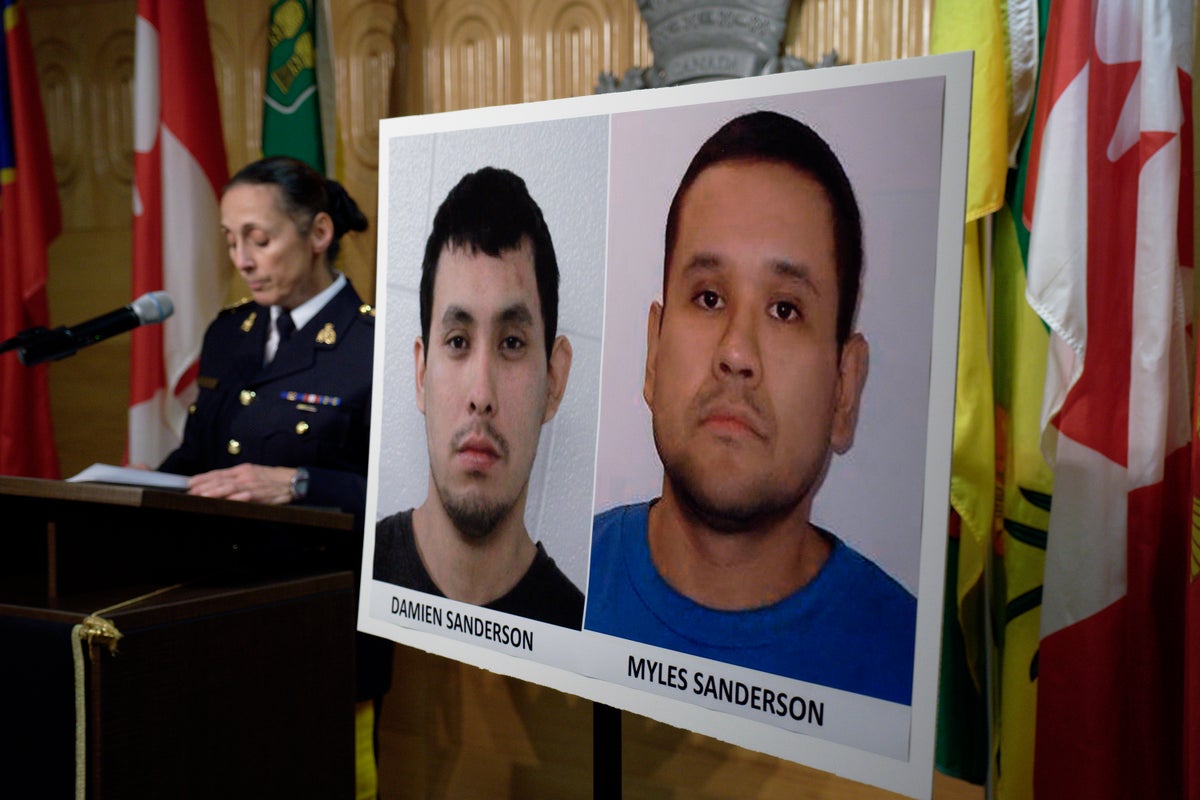 10 dead and 18 injured in mass stabbings across Saskatchewan, Canada

Saskatchewan police said Tuesday that they no longer believe Myles Sanderson is in the province’s capital of Regina as the manhunt for the wanted stabbings suspect stretched into its fourth day.

“Today we received information that was leading us to believe he may no longer be in this community,” said Regina Police Chief Evan Bray in a video address posted to his Twitter.

Earlier on Tuesday, RCMP made the announcement that the 30-year-old had not been found on James Smith Cree Nation land hours after a reported sighting there led to a massive law enforcement response.

“As his whereabouts remain unknown, we urge the public to take appropriate precautions,” RCMP said in an emergency alert.

One day earlier, Damien Sanderson, 31, the second suspect and brother of Myles, was found dead from wounds that did not appear to be self-inflicted, police said.

His body was recovered in a heavily grassed area of ​​the James Smith Cree Nation near a house that police were examining.

Both men were named by police in connection with the violence that left 10 people dead and another 18 wounded in a stabbing spree across 13 locations throughout the province of Saskatchewan, according to the Royal Canadian Mounted Police (RCMP).

When Myles Sanderson was reportedly last seen on Sunday morning in Regina, more than 300km away from where a bloody series of stabbing attacks were carried out at James Smith Cree Nation hours earlier, he was reportedly making a final round of goodbyes to family and friends.

The Daily Beast reportedly exclusively, citing unnamed sources who were close to the manhunt for the 30-year-old suspect, that Myles drove into the city “to see [those Regina connections] for the last time.”

Some of the sources in the report relayed to The Daily Beast that one of the theories that they currently suspect is that the remaining alive suspect has since died by suicide.

“If Myles Sanderson was alive and being harbored somewhere by someone, we’d know about it by now,” one of the sources quoted in the news story told The Daily Beast.

An 11-year-old boy injured in the attacks watched his mother and older brother die, reports

Brian Burns, a resident of James Smith First Nation, was out of town at a horse racing competition on Sunday when he learned the news that his wife, Gloria Burns, and 28-year-old son, Gregory Burns, had all died at the hands of two men suspected of carrying out one of Canada’s deadliest mass killings.

“Wow not the call to wake up to this morning,” he wrote on Facebook the morning of the mass stabbing event. Mr Burns’ other son, 11-year-old Dayson, was also stabbed and injured during the attack. He was released from the hospital on Monday with stitches, but the trauma of watching his mother and brother die is a wound his father says he will not likely heal.

“it’s hard when my boys cry at night for their mom,” he wrote Tuesday, noting that the family was unable to get back inside the home “to grab anything” because there was “too much blood inside” the house that he and his “wife built together”

“even when the rcmp are done collecting evidence n autopsy are done they are bringing in professional cleaners,” he added, unsure if his remaining sons will ever want to enter the family home where they watched two of their own die.

ICYMI: “Being there with whatever supports are needed right now in this moment of crisis is our focus,” Prime Minister Justin Trudeau said at a press conference in Vancouver on Tuesday afternoon.

“As a federal government, we’re ensuring that whatever resources are needed by the police and jurisdiction are received to be able to put an end to this situation, and to allow people to grieve without fear and to start the healing process that will take an awfully, awfully long time, because this was an incredibly horrific and traumatic event.”

Police say they believe Myles Sanderson is no longer in Regina

Regina Police Chief Evan Bray provided an update on the manhunt for Myles Sanderson late Tuesday night and described how authorities now believe that the remaining suspect in the Saskatchewan stabbings has left the province’s capital of Regina.

“Early on Sunday we had information that proved to be reliable that Myles Sanderson was in our community and that as a result, the Regina Police Service was assisting the RCMP in trying to locate him,” the chief began in a video address posted to his Twitter.

“Today we received information that was leading us to believe he may no longer be in this community.”

The chief went onto explain that though investigators “don’t know his whereabouts”, the Regina police are continuing to assist with this RCMP-led investigation and will continue to look for him “not only within the city of Regina but expanding into the province as well.

ICYMI: “After further investigation into the reports of possible sightings of Myles Sanderson on the James Smith Cree Nation, the RCMP has determined that he is not located in the community. The RCMP continues to search for Myles Sanderson,” they stated.

“As the whereabouts of Myles Sanderson remain unknown, the emergency alert is active for the entire province and we continue to urge the public to take appropriate precautions.”

ICYMI: Two men are suspected to have carried out a spate of stabbings across Saskatchewan in one of the deadliest mass killings in Canada’s history.

One of the men, Damien Sanderson, was found dead Monday morning near a home that was being examined by police in James Smith Cree Nation as part of the investigation.

The other man, 30-year-old Myles Sanderson, remains at large with police insisting in recent briefings that they’re still working under the assumption that the suspect is somewhere in Regina, where he was reportedly last seen on Sunday morning, despite that intel being now more than a day old.

To get up to speed on everything we know about the two suspects in the Saskatchewan stabbings, read The Independent’s latest explainer:

One of the suspects, Myles Sanderson, 30, was reportedly listed as ‘unlawfully at large’ by Saskatchewan Crime Stoppers in May

ICYMI: Following the violence on the James Smith Cree Nation, campus officials welcome say that they will scale back week activities.

University President Peter Stoicheff said that they planned to postpone any large campus gatherings “out of respect for the communities affected and for the fact that the situation remains an emergency.”

ICYMI: The Duke and Duchess of Cambridge offered up their condolences for the families and friends of the victims who were killed and wounded on Sunday after a pair of brothers are suspected to have carried out a series of stabbing attacks in northern Saskatchewan.

“The attacks at James Smith Cree Nation and Weldon, Saskatchewan are truly heart-breaking. Our thoughts and prayers are with the victims of these horrific acts and all those who have lost loved ones. Catherine and I send our best wishes to the people of Canada. W,” a tweet from the official Twitter account of the royal couple read.

ICYMI: Tributes for the victims killed and wounded in the James Smith Cree Nation stabbing attack on Sunday stretched across Canada on Monday night, with Toronto’s CN Tower creating their own makeshift memorial for the victims the massacre.

“Tonight the CN Tower will dim for five minutes at the top of each hour in honor of the victims of attacks in James Smith Cree Nation and Weldon, Saskatchewan,” the Twitter account for the CN Tower read on Monday night.

The ‘random’ victims of the Saskatchewan stabbing attacks

ICYMI: A spate of “abhorrent” stabbings in Canada’s western Saskatchewan province led to the deaths of 11 people, including one of the suspects, and one 18 wounded victims, with officials attempting to identify the victims and remain on the lookout for the last suspect .

With the long weekend drawing to a close, the identities of the mothers, brothers, sisters and uncles who peopled the tight knit northern communities of Saskatchewan and whose lives were untimely cut short began to emerge.

One such person was 49-year-old Lana Head, a mother of two who worked as a security guard at Northern Lights Casino and was also a commissionaire officer.

He was quoted as saying: “It’s sick how jail time, drugs and alcohol can destroy many lives. I’m hurt for all this loss.”

Read more about the lives of the people who were killed in Sunday’s brutal stabbing attack below:

‘No one in this town is ever going to sleep again,’ niece of 77-year-old victim says