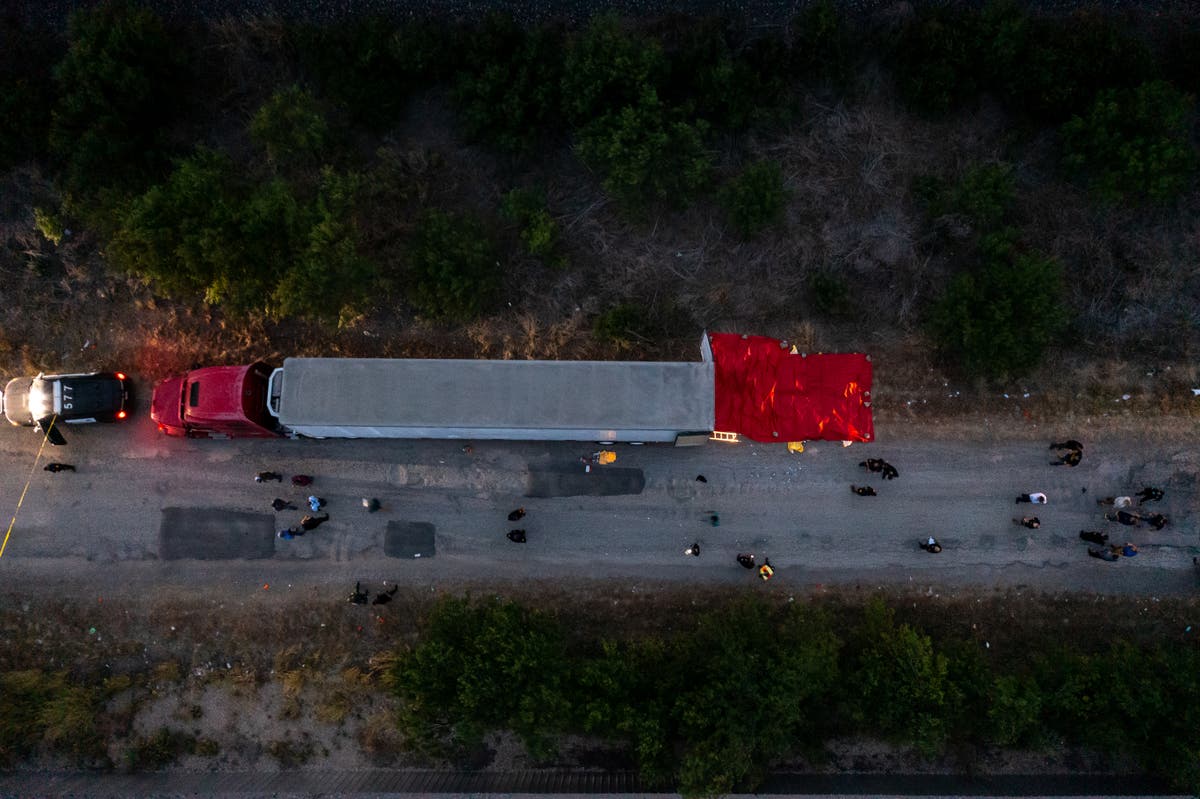 At least 46 dead bodies were found in a truck’s tractor-trailer in San Antonio, Texas, on Monday evening, in what authorities suspect may be a shocking instance of cross-border migrant trafficking gone wrong.

Another 16 people were taken to local hospitals in varying conditions, according to officials, including four children.

“There are, that we know of, 46 individuals who are no longer with us, who had families, who were likely to try to find a better life. And we have 16 folks who are fighting for their lives in the hospital. Our focus right now is to try to bring aid to them as best we can. But this is nothing short of a horrific human tragedy,” he said.

The Department of Homeland Security is investigating the incident.

A look at the deadliest migrant suffocation incidents

27 June 2022: 46 suspected immigrants were found dead in a sweltering trailer on a remote back road in southwestern San Antonio.

23 July 2017: Eight immigrants were found dead in a sweltering trailer at a San Antonio Walmart parking lot. Two others died later in hospitals. The driver was sentenced to life in prison.

20 Feb 2017: 13 African migrants suffocated inside a shipping container while being transported between two towns in Libya. A total of 69 migrants, most from Mali, were packed into the container, according to the local Red Crescent branch.

27 Aug 2015: Austrian police discovered an abandoned truck containing the bodies of 71 migrants, including eight children, from Iraq, Syria and Afghanistan. The truck, found along a highway, had crossed into Austria from Hungary.

4 April 2009: 35 Afghan migrants suffocated inside a shipping container in southwestern Pakistan. Authorities said that more than 100 people were packed inside the container.

9 April 2008: 54 Burmese migrants suffocated in the back of an airtight refrigerated truck in Ranong, Thailand.

14 May 2003: 19 migrants died inside a sweltering tractor-trailer while they traveled from South Texas to Houston.

18 June 2000: 58 Chinese immigrants were found dead inside a truck in the English port town of Dover. The Dutch truck had transported the immigrants across the English Channel from Belgium. Two people survived.

Mexico’s foreign minister Marcelo Ebrard called the suffocation of the migrants in the truck the “tragedy in Texas” on Twitter and said the local consulate was en route to the scene, though the nationalities of the victims had not been confirmed.

The stretch of San Antonio where today’s tractor-trailer tragedy was discovered was a known “drop off spot” for migrants, according to Ruby Chavez, who lives nearby.

Texas officials are noting that Monday’s suspected human trafficking catastrophe is similar to an incident from 2017 in San Antonio.

Ten people died after being transported in the back of a sweltering tractor-trailer which carried up to 100 suspected unauthorised migrants.

Officials have not fully confirmed that those inside the tractor-trailer discovered full of bodies on Monday were migrants, but that’t stopped Texas’s governor Greg Abbott from blaming the tragedy on Joe Biden’s “open border” policies.

As reporter Dara Lind notes, however, it is the Texas government which has in fact contributed greatly to locking down the border under Biden, pushing migrants towards unofficial methods of crossing.

Police and fire department officials in Texas addressed the public on Monday night, after 46 dead bodies were found in a tractor-trailer in San Antonio this evening.

“We have 16 folks who are fighting for their lives in the hospital,” San Antonio mayor Ron Nirenberg said. “Our focus right now is to try and bring aid to them as best we can. This is nothing short of horrific human tragedy.”

You can watch their full remarks here, via the San Antonio Police Department Facebook page.

The unit is a division of Immigration and Customs Enforcement.

Officials have yet to officially confirm those inside the truck were migrants, although it is suspected to be so.

Officials have provided a grim update on the death toll from the tractor-trailer found filled with bodies in San Antonio on Monday.

They confirmed 46 people are dead, and another 16 were taken to hospitals with heat-related injuries, including four children.

“We’re not supposed to open up a truck and see stacks of bodies in there,” San Antonio Fire Department chief Charles Hood said.

Three people have been taken into custody, although they haven’t been named as suspects, officials said.

Texas governor Greg Abbott is blaming Joe Biden’s border policies for the more than 40 likely migrants found dead in a tractor-trailer on Monday near San Antonio.

“These deaths are on Biden,” Mr Abbott said in a statement on Monday. “They are a result of his deadly open border policies. They show the deadly consequences of his refusal to enforce the law.”

The Biden administration, far from maintaining open borders, has retained many of Donald Trump’s most stringent immigration measures.