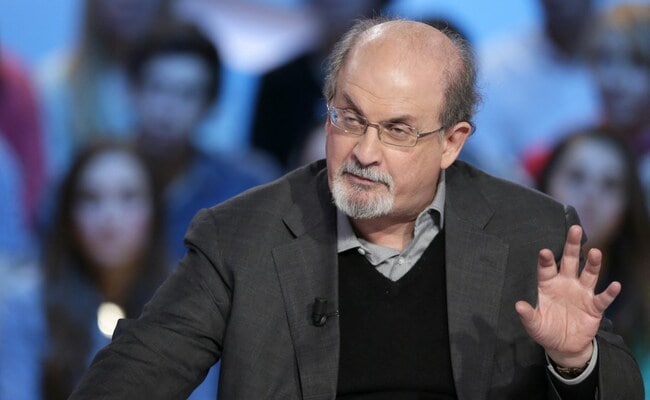 Renowned author Salman Rushdie was taken off a ventilator and will be able to talk, a day after he was stabbed in New York on Friday morning during a lecture.

Mr Rushdie’s agent, Andrew Wylie, confirmed that he was taken off a ventilator and could be able to talk, without giving further details, according to the Washington Post.

Earlier, Hadi Matar, who is suspected of stabbing Indian-born-British author Salman Rushdie, pleaded not guilty to attempted murder in the second degree and other charges in a New York court.

Matar was arraigned in centralized arraignment on Saturday and was remanded without bail at Chautauqua County Jail.

According to Nathaniel Barone, his public defender, Matar pleaded not guilty, CNN reported.

“On August 12, 2022, the Bureau of Criminal Investigation arrested Hadi Matar, 24 of Fairview, NJ for Attempted Murder 2nd degree (B Felony) and Assault 2nd degree. Matar was processed at SP Jamestown and transported to Chautauqua County Jail. Matar was arraigned in centralized arraignment on August 13, 2022, and was remanded without bail at Chautauqua County Jail,” the New York State Police said in a statement.

According to the statement, “On August 12, 2022, at about 10:47 am, a male suspect later identified as Hadi Matar, 24 of Fairview, NJ ran up onto the stage and attacked Salman Rushdie, 75. Rushdie suffered an apparent stab wound to the neck and chest and was transported by helicopter to an area hospital. His condition is not yet known.”

The New York State police further informed that the co-speaker for the event, Ralph Henry Reese, 73 also suffered a minor head injury. The staff members of the Chautauqua Institution and guests went on stage to assist in holding down the suspect. A State Trooper assigned to the event was next to the stage and took the suspect into custody.

Mr Rushdie, who faced death threats over his book ‘The Satanic Verses’, was stabbed on stage in New York.

New York State Police identified the suspect on Friday. Describing the whole incident, they said in a statement that a male suspect ran up onto the stage prior to a speaking event at the Chautauqua Institution in Chautauqua and attacked Rushdie.

It said the author suffered an apparent stab wound to the neck and was transported by helicopter to an area hospital. The suspect has been taken into custody.

The 75-year-old author caught the limelight for his novel ‘Midnight’s Children’ in 1981.

His 1988 book ‘The Satanic Verses’ led to a fatwa, a religious decree, by the then Iranian revolutionary leader Ayatollah Ruhollah Khomeini. The threat forced him into hiding for several years.

The attack on Mr Rushdie has drawn wide international condemnation.