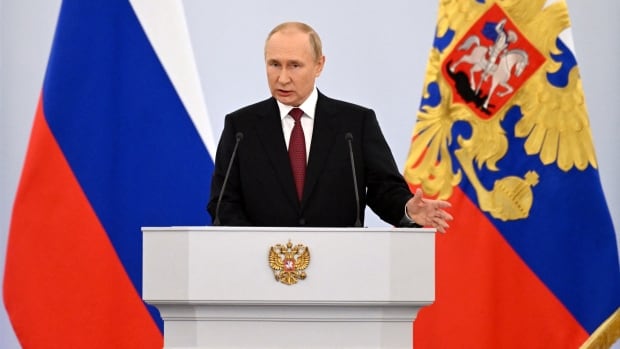 Russian President Vladimir Putin launched the process of annexing parts of Ukraine by saying he would sign laws to absorb them despite international condemnation — and said he would protect the newly incorporated regions using “all available means.”

In a speech preceding a treaty-signing ceremony to make four regions part of Russia, Putin warned his Ukrainian country would never give up the occupied areas and would protect them as part of its sovereign territory.

He urged Ukraine to sit down for talks to end the fighting but sternly warned that Russia would never surrender control of the Donetsk, Luhansk, Kherson and Zaporizhzhia regions. He accused the West of fueling the hostilities as part of its plan to turn Russia into a “colony” and a “crowds of slaves.”

The ceremony came three days after the completion of Kremlin-orchestrated “referendums” on joining Russia that were dismissed by Kyiv and the West as a bare-faced land grab, held at gunpoint and based on lies.

The event in the Kremlin’s opulent white-and-gold St. George’s Hall was organized for Putin and the heads of the four regions of Ukraine to sign treaties for the areas to join Russia, in a sharp escalation of the seven-month conflict.

The separatist Donetsk and Luhansk regions in Eastern Ukraine have been backed by Moscow since declaring independence in 2014, weeks after the annexation of Ukraine’s Crimean Peninsula. The southern Kherson region and part of the neighboring Zaporizhzhia were captured by Russia soon after Putin sent troops into Ukraine on Feb. 24.

WATCH l West must ‘isolate Putin and his regime’: ambassador

Canada’s Ambassador to Ukraine Larisa Galadza says President Putin’s plan for annexation of Ukrainian territory is “an attempt to assert control” and “whatever happens in the next couple of days. The response of the West will be to escalate the isolation of Putin and his regime .”

Both houses of the Kremlin-controlled Russian parliament will meet next week to rubber-stamp the treaties, after which Putin will sign them into law.

Putin and his lieutenants have bluntly warned Ukraine against pressing an offensive to reclaim the regions, saying Russia would view it as an act of aggression against its sovereign territory and wouldn’t hesitate to use “all means available” in retaliation, a reference to Russia’s nuclear arsenal.

The US and its allies have promised to pile even more sanctions on Russia and to offer billions of dollars in extra support for Ukraine as the Kremlin duplicates the annexation playbook it followed when it incorporated Ukraine’s Crimean Peninsula in 2014.

US President Joe Biden said on Thursday that the US would “never recognize Russia’s claims on Ukraine sovereign territory.”

As well, United Nations Secretary-General Antonio Guterres said Thursday annexation would violate the UN Charter and has “no legal value.”

“Any decision by Russia to go forward will further jeopardize the prospects for peace,” Guterres said.

The ceremony came hours after at least 25 people were killed in Zaporizhzhia, a Russian strike condemned by Ukraine’s president.

President Volodymyr Zelenskyy posted on his Telegram channel Friday that only “terrorists” would target civilians and accused Russia of trying to seek revenge against Ukraine for its “steadfastness” and to make up for its own battlefield failures.

He said the “enemy” Russia “cynically destroys because he lost everything human a long time ago” and warned that the country Ukrainian would answer ” peaceful for every lost Ukrainian life.”

Ukraine’s Prosecutor’s Office said another 50 people were injured in the S-300 missile attack on a convoy of vehicles on Zaporizhzhia’s outskirts that officials said planned to ferry relative back to safety from Russian-occupied territory.

Kyrylo Tymoshenko, deputy head of Zelenskyy’s office said four of the missiles that were launched had struck the convoy area, causing impact craters several meters deep near cars whose windows had all been blown out. Some of the dead lay on the ground covered by trash bags, blankets and towels, while others remain in their vehicles.

With Ukraine vowing to take back all occupied territory and Russia pledging to defend its gains, and threatening nuclear-weapon use to do so, the two countries are on an increasingly escalatory collision course.

That was underscored by the fighting for the city of Lyman, some 160 kilometers southeast of Kharkiv, Ukraine’s second-largest city.

A key node for Russian military operations in the contested Donbas region, it is a sought-after prize for a Ukrainian counteroffensive that has had spectacular success since its launch in late August.

The Washington-based Institute for the Study of War said the city’s fall to Ukrainian forces “is imminent,” unless Russia can ward off the collapse with speedy reinforcements, which appeared “highly unlikely.”

Elsewhere, Russian strikes were also reported in the city of Dnipro. The regional governor, Valentyn Reznichenko, said at least one person was killed and five others were wounded by Russian Iskander missiles that slammed into a transportation company, destroying buses also damaging high-rise buildings.