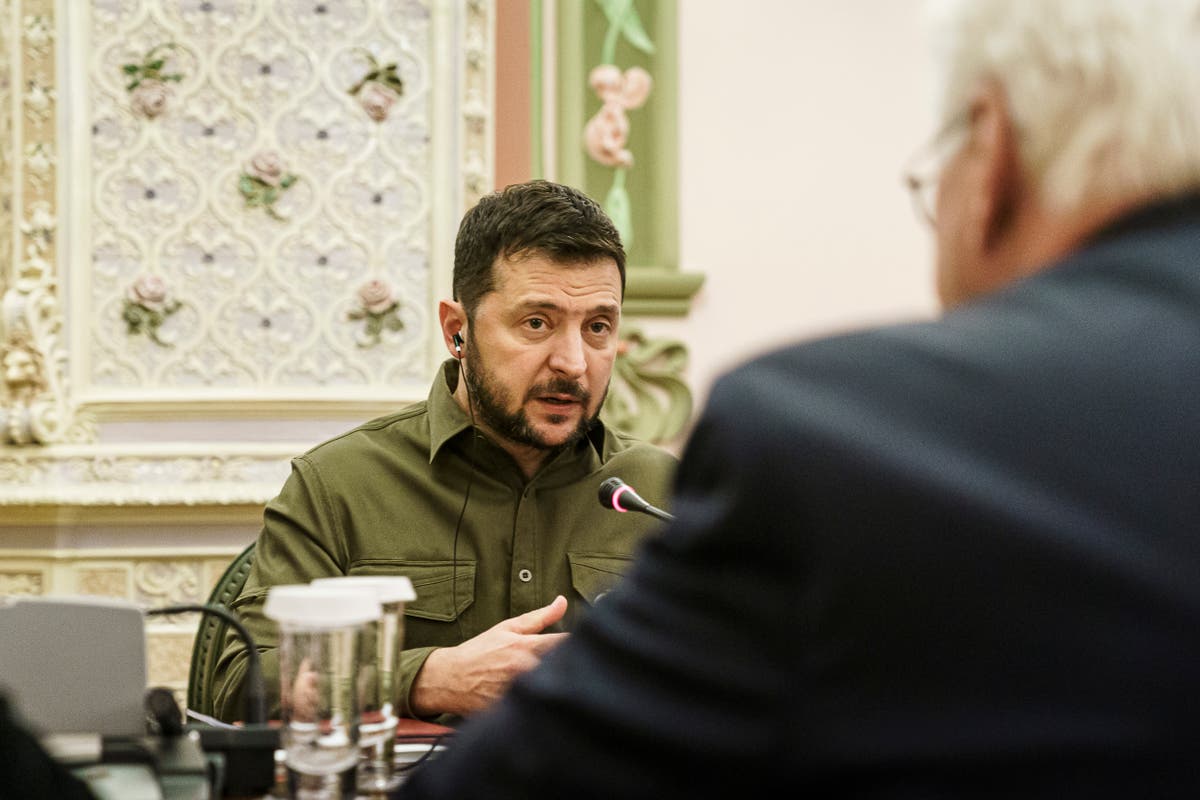 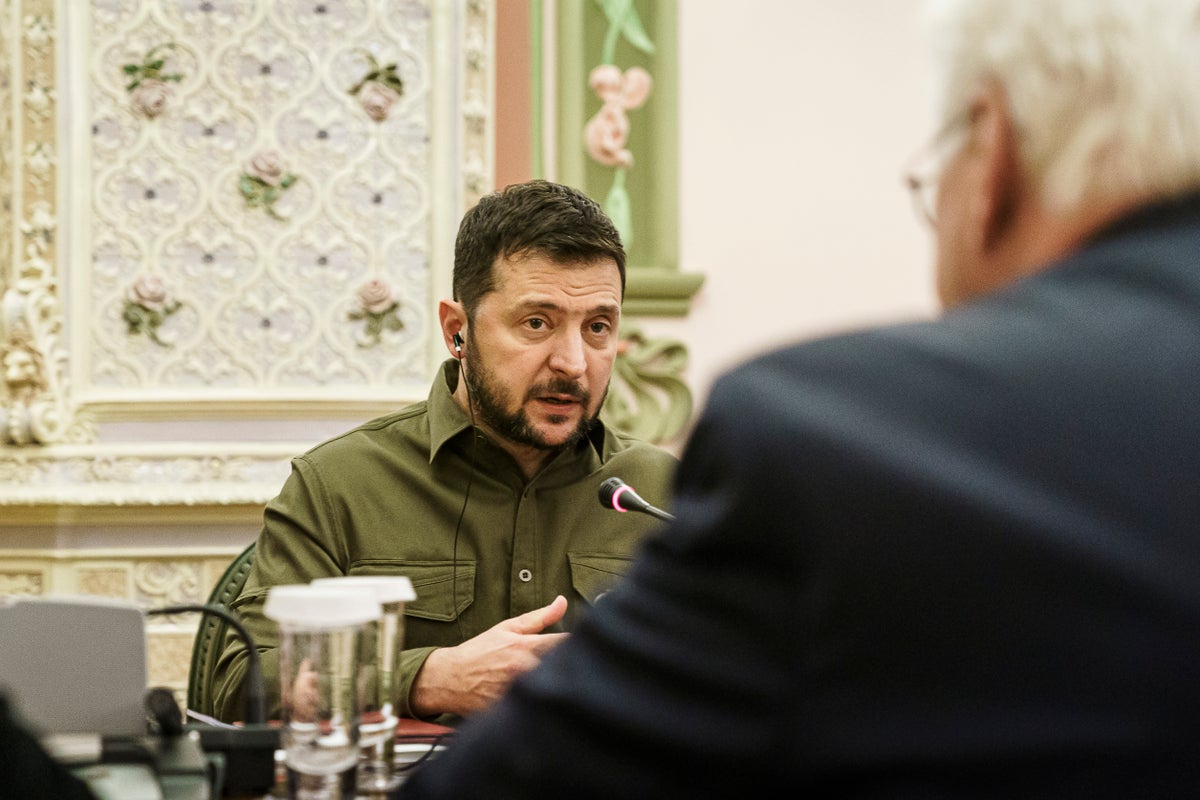 Vladimir Putin is driving inexperienced Russian soldiers “to their deaths” in an intense assault on Ukraine’s east, says Volodymyr Zelensky.

Without referring to his Russian counterpart by name, Mr Zelensky said overnight that “very fierce Russian attacks in the Donetsk region continue”.

“The enemy suffers serious losses there, but despite everything, despite any losses, he [Putin] continues to drive his mobilized soldiers and mercenaries to their deaths,” the Ukrainian president said in his nightly address.

Mr Zelensky also said that Moscow could be planning more attacks on Ukraine’s energy infrastructure, while millions of Ukrainians are already without electricity.

Kyiv mayor Vitali Klitschko warned residents to prepare for the worst this winter – and possible evacuation from the capital – if it becomes impossible to provide energy to the city amid Russian bombing.

Hourly rotating blackouts were in force in Kyiv yesterday, with a similar power-saving scheme planned for the Chernihiv, Cherkasy, Zhytomyr, Sumy, Kharkiv and Poltava regions.

Rolling blackouts have been taking place for weeks in the capital after repeated Russian attacks on energy infrastructure.

Despite warnings from President Volodymyr Zelensky that more strikes were planned, the capital was relatively peaceful on Monday morning.

But Ukrenergo, the grid operator, said earlier damage to the power network required a stronger reduction in energy use than first thought.

“The country’s power grid still cannot resume full operation after the Russian terrorist attacks. In some regions, we have to introduce blackouts to avoid overloading the high-voltage infrastructure,” a spokesperson said in a statement.

Scheduled shutdowns from 6am local time to the end of the day will affect Kyiv and the regions of Chernihiv, Cherkasy, Zhytomyr, Sumy, Kharkiv and Poltava, it said in a statement.

Biden and Scholz in Ukraine call

A spokesperson for the president’s office said: “The leaders agreed that Russia’s recent nuclear threats are irresponsible.

“They underscored the continued commitment of the United States and Germany to provide Ukraine with the economic, humanitarian, and security support it needs to defend against Russia’s aggression.”

The mayor of Kyiv has urged residents to make evacuation plans as the capital could lose power this winter if Russia keeps striking the country’s energy infrastructure.

Residents should consider “spending some time” with friends or family outside the city, Vitali Klitschko said in a television interview, in which he accused Russian president Vladimir Putin of deliberately targeting civilian infrastructure.

“His task is for us to die, to freeze, or to make us flee our land so that he can have it. That’s what the aggressor wants to achieve,” Mr Klitschko added.

Having no electricity, water or heat in the freezing cold cannot be ruled out in the Ukrainian capital, Vitali Klitschko said.

“We are doing everything to avoid this,” he said.

“But let’s be frank, our enemies are doing everything for the city to be without heat, without electricity, without water supply, in general, so we all die. And the future of the country and the future of each of us depends on how prepared we are for different situations.”

Kyiv was having hourly rotating blackouts in parts of the city and the surrounding region on Sunday. Rolling blackouts were also planned in the Chernihiv, Cherkasy, Zhytomyr, Sumy, Kharkiv and Poltava regions, Ukraine’s state-owned energy operator Ukrenergo said.

The Ukrainian president, in his regular nightly address, said Russia was “concentrating forces and means for a possible repetition of mass attacks on our infrastructure. First of all, energy.”

Russia has launched a series of air strikes in recent weeks targeting energy infrastructure in Ukraine and restricting power use for large parts of the country.

More than 4.5 million consumers were already without power, Mr Zelensky said, as Ukraine’s energy operator warned that blackouts needed to be longer.

Presidential adviser Mykhailo Podolyak said earlier on Twitter that Ukraine would “stand” despite Russian attacks on its energy infrastructure, adding that this would be done by using air defence, protecting infrastructure and optimizing consumption.

The country’s projected power supply was 32 percent below normal on Monday, Sergei Kovalenko, CEO of Yasno, a major supplier of energy to the capital, said.

The British defense ministry has said that Russia’s dwindling air superiority has been further hit by the country’s loss of experienced crew members over the course of the war.

Citing the Ukrainian commander-in-chief Valeriy Zaluzhnyi, the British MoD said that Russia has lost over twice the number of aircraft in Ukraine than in the Soviet-Afghan war.

This amounts to 278 aircraft lost in Ukraine compared to 119 in Afghanistan, it said.

It added: “This is unlikely to change in the next few months. Russia’s aircraft losses will likely significantly outstrip their capacity to manufacture new airframes.”

Vladimir Putin told French president Emmanuel Macron that the nuclear attacks on Hiroshima and Nagasaki show “you don’t need to attack major cities in order to end a war,” according to reports.

The Mail on Sunday reported to the French government source as saying the Russian president referenced Hiroshima in a call with Mr Macron which left the French president “distinctly alarmed”.

The threat of a Russian atomic strike – particularly one with tactical nuclear weapons which are designed to cause devastation on the battlefield – has been speculated on at the highest level by Ukraine and its western allies.

Reports in the US media said Washington had intelligence showing that senior Russian officials had recently held conversations to discuss when and how Moscow might use a tactical nuclear weapon in Ukraine.

One killed after Russian shelling in Sumy

At least one person has been killed in a Russian shelling attack on Sumy oblast, officials said. The officials have accused Russia of firing more than 200 projectiles on Sunday, reported The Kyiv Independent.

Smaller regions like Bilopillia, Esman, Vorozhba, Krasnopillia, Khotin, Seredyna-Buda, and Shalyhyne came under attack in which seven houses have been reported damaged due to the shelling.

A local cemetery, two cars, one cafe and power lines have also been damaged in the attack, the official said.

Officials in Kyiv and Washington have acknowledged that Volodymyr Zelensky’s refusal to engage in talks with Vladimir Putin is now causing concern in parts of Europe, Africa and Latin America as countries suffer an indirect hit from the war.

“Ukraine fatigue is a real thing for some of our partners,” an unnamed US official said, reported the Washington Post.

The Russian war on Ukraine – which has killed thousands of civilians and forced an exodus of millions of Ukrainians – has hurt markets and seen rising costs of food and fuel worldwide.

The Biden administration is said to be privately encouraging Ukraine to signal an openness to negotiate with Russia.

The US State Department has publicly defended Zelensky’s position, saying Moscow is clearly still escalating the war and shows no signs of wanting to seriously consider peace talks.

According to the report, the request by the US officials was not directed at bringing Ukraine to the negotiating table, unnamed sources told the post.

It was instead a calculated attempt to ensure Kyiv maintains the support of other nations, it added.

Volodymyr Zelensky has said Russia is planning more assaults on Ukraine’s infrastructure, especially when it comes to energy production and distribution.

He added that Kyiv is preparing to respond to the anticipated attacks.

“We understand that the terrorist state is concentrating forces and means for a possible repetition of mass attacks on our infrastructure. First of all, energy. In particular, for this, Russia needs Iranian missiles,” he said in his nightly address.

Volodymyr Zelensky has accused Moscow of driving its mobilized soldiers to death while warning that attacks have soared in Russia-occupied Donetsk region.

“Very fierce Russian attacks in the Donetsk region continue. The enemy suffers serious losses there, but despite everything, despite any losses, he continues to drive his mobilized soldiers and mercenaries to their deaths,” Mr Zelensky said in his nightly address.