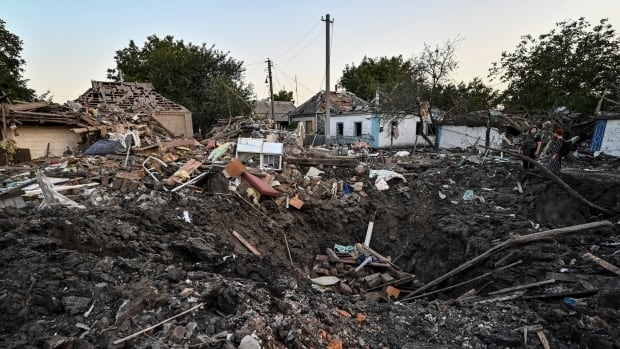 The death toll from a Russian rocket attack as Ukraine observed its Independence Day has risen to 25, including an 11-year-old boy found under the rubble of a house and a six-year-old killed in a car fire near a train station that was the target, a Ukrainian official said Thursday.

Russia’s Defense Ministry said its forces used an Iskander missile to strike a military train that was carrying Ukrainian troops and equipment to the front line in eastern Ukraine. The ministry claimed more than 200 reservists “were destroyed on their way to the combat zone.”

The deputy head of the Ukrainian presidential office, Kyrylo Tymoshenko, did not say if the 25 victims he reported from Wednesday’s attack were all civilians. A total of 31 people sustained injuries, he said.

The lethal strike in Chaplyne, a town of about 3,500 residents in the central Dnipropetrovsk region, nonetheless served as a painful reminder that Russia’s military force is causing civilians to suffer and testing Ukraine’s resilience after six months of a grinding war.

The train station strike took place after President Volodymyr Zelenskyy warned that Moscow might attempt “something particularly cruel” this week as Ukraine marked both its 1991 declaration of independence from the Soviet Union and the six-month point of Russia’s invasion on Wednesday.

Tetyana Kvitnytska, deputy head of the Dnipropetrovsk regional health department, said the people wounded in the attack suffered a range of injuries.

“There are craniocerebral injuries, limb fractures, many patients with explosive and shrapnel injuries, burns,” she said. “People were in a difficult condition, both physically and psychologically.”

The Current19:28On a somber Independence Day, resolve for victory is stronger than ever, says Ukrainian MP

Today marks six months since Russia’s invasion of Ukraine, and also Independence Day in Ukraine — though celebrations have been banned over fears of a Russian attack. To hear how the day is being marked and how the war is progressing, guest host Nora Young talks to Ukrainian MP Ivanna Klympush-Tsintsadze, and David Marples, distinguished professor of Russian and East European History at the University of Alberta.

The Russian government has repeatedly claimed following attacks in which civilians died that its forces were only aimed at legitimate military targets. Hours before the train station attack, Russia insisted it was doing its best to spare civilians, even at a cost of slowing down its offensive in Ukraine.

Russian Defense Minister Sergei Shoigu, speaking Wednesday at a meeting of his counterparts from a security organization dominated by Russia and China, said Russia was carrying out strikes with precision weapons against Ukrainian military targets, and “everything is done to avoid civilian casualties.”

“Undoubtedly, it slows down the pace of the offensive, but we do it deliberately,” he said.

It was the second time Shoigu has made such a claim; he said the same thing in late May.

WATCH l The costs and limitations in an artillery-heavy war:

CBC’s David Common gets a rare look at some of the weapons the US is sending to Ukraine from Dover Air Force Base in Delaware to find out more about the crucial role Western nations are playing in Ukraine’s fight against Russia.

Elsewhere in Ukraine, three people were killed in the eastern region of Donetsk on Wednesday and one more was wounded, Gov. Pavlo Kyrylenko said on Telegram.

Nikopol, a city across the river from the Zaporizhzhia Nuclear Power Plant, came under more Russian shelling overnight, said Valentyn Reznichenko, the governor of the Dnipropetrovsk region.

Ukrainian staff continue to operate the plant, but special Russian military units guard the facility and Russian nuclear specialists give advice. The International Atomic Energy Authority (IAEA) has warned that the staff are operating under extremely stressful conditions.

Rafael Grossi, IAEA chief, told France 24 TV on Thursday that the UN nuclear watchdog is “very, very close” to being able to go to the Russian-held plant to inspect conditions there. UN Secretary General Antonio Guterres has called for the area around the plant, Europe’s largest, to be demilitarized.

In Russia, Putin signed a decree on Thursday to increase the size of Russia’s armed forces by 137,000 members. The decree didn’t explain whether the military will beef up its ranks by drafting a bigger number of conscripts, increasing the number of volunteer soldiers or using a combination of both.

The Kremlin has said that only volunteer contract soldiers take part in what it calls the “special military operation” in Ukraine, rejecting claims that it was pondering a broad mobilization.

It is not exactly clear how many losses Russia has sustained since its late-February invasion. A high-ranking US official at the Pentagon told reporters earlier this month that up to that point, somewhere between 70,000 and 80,000 Russian soldiers had been killed or wounded.