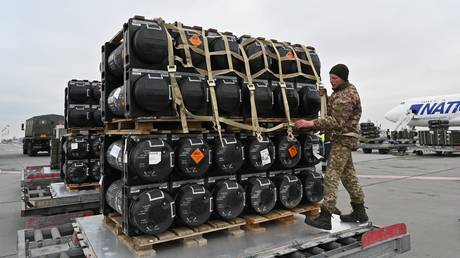 Russian forces have reportedly destroyed two British-supplied missile systems in Ukraine, according to a statement by Russia’s Defense Ministry released on Friday.

Neither Kiev nor London have yet confirmed or denied the destruction of the missile systems.

Russia has repeatedly warned Western countries against providing Kiev with additional weaponry, arguing that it would only serve to prolong the conflict and create more long-term problems even beyond the territory of Ukraine.

Earlier this week, Russian Defense Minister Sergey Shoigu stated that some of the foreign weapons intended for Ukraine had failed to reach their destination and were reportedly seen reappearing throughout the Middle East and ending up on black markets.

The West has continued to pour in weapons and ammunition into Ukraine. Late last month, the G7 countries pledged to provide support to Ukraine in all possible forms “for as long as it takes.”

Meanwhile, Moscow has insisted that it will continue to designate any shipments of lethal aid to Ukraine as legitimate targets.

Russia sent troops into Ukraine on February 24, citing Kiev’s failure to implement the Minsk agreements, designed to give the regions of Donetsk and Lugansk special status within the Ukrainian state. The protocols, brokered by Germany and France, were first signed in 2014. Former Ukrainian president Petro Poroshenko has since admitted that Kiev’s main goal was to use the ceasefire to buy time and “create powerful armed forces.”