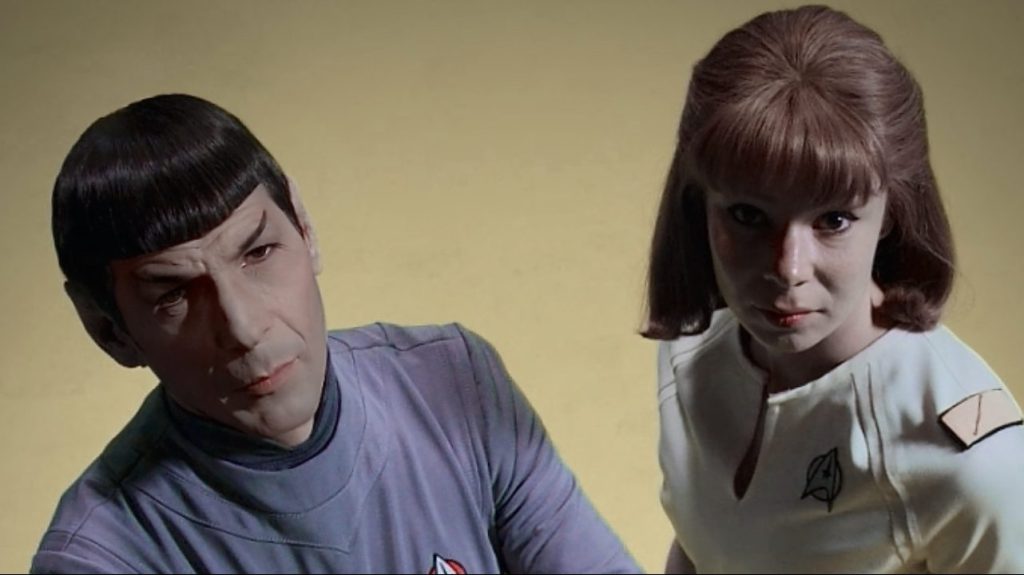 EXCLUSIVE: Today at the Star Trek convention The 56-Year Mission: Las Vegas put on by Creation Entertainment, the Gene Roddenberry Estate and and the cloud graphics company Otoy Inc. offered Trekkies a first look at the results of a year of production work on the Roddenberry Archive — unveiling the first interactive, life-sized recreations of the famed spacecraft known as the Starship Enterprise. 1:1 scale Enterprise models and sets have been recreated according to Star Trek canon, to view the history of Star Trek in new holographic mediums, so that future generations can experience franchise creator Roddenberry’s legacy with the highest levels of immersion and historical fidelity.

While at Bally’s for the convention, Otoy showcase an immersive “The Cage” experience, enabling viewers to explore the first deck of the Enterprise created by Roddenberry for the initial pilot of Star Trek. The fully immersive, interactive, 360-degree experience allows audiences to navigate around the Starship Enterprise Bridge and even sit in Captain Pike’s chair as if they were there on set of “The Cage” in 1964.

Also unveiled in Las Vegas were recreations of scenes from Star Trek‘s early and film history that can be actors explored in 3D with Mahé Thaissa and Lawrence Selleck bringing “The Cage”’s Yeoman Colt and Mr. Spock to life. Recreations of the set from “The Cage” and the Enterprise Bridge was overseen by preeminent Star Trek cast and crew including Denise and Mike Okuda, authors of Star Trek: The Encyclopediaand renowned Star Trek VFX artists Doug Drexler and Daren Dochterman.

On a mainstage panel moderated by Gates McFadden, who played Dr. Beverly Crusher in projects ranging from Star Trek: The Next Generation to Star Trek: Picard, Otoy’s Co-Founder and CEO, Jules Urbach, joined the Okudas and Dochterman, as well as Roddenberry Entertainment President Rod Roddenberry to discuss the past year of work on the Roddenberry Archive. The panel wound down with a concept teaser for the Star Trek immersive experiences titled “765874,” which was put together via cutting-edge virtual production technologies, as well as access to LightStage scans of original Star Trek uniforms, props and archival materials. Also presented was a second teaser, “Memory Wall,” exploring scenes and concepts of the characters in “The Cage” and Roddenberry’s novelization, Star Trek: The Motion Picture.

The immersive experiences were accompanied by the release of three supplemental video logs providing archival behind-the-scenes testimony surrounding the creation of the first Star Trek pilot The videos featured interviews inside fully recreated, life-sized Star Trek virtual production sets with the Okuda; Chis Hunter, son of Jeffrey Hunter who played Captain Pike in “The Cage”; Sean Kenney who played Captain Pike in The Menagerie; and Robert Butler, director of “The Cage.” The clips also highlighted archival photographs from the set of “The Cage,” and behind the scenes material drawn from thousands of documents that have been digitally archived by The Roddenberry Estate in collaboration with Otoy.

“For over a decade we have been collaborating with The Roddenberry Estate to preserve Gene Roddenberry’s legacy. Today’s release marks the first steps towards capturing his Gene’s work in a new way that is fully immersive and interactive for future generations to experience Star Trek as if they were there in 1964,” said Urbach. “Gene Roddenberry saw into the future and projected a vision of the future where remarkable technologies affirmed the human spirit and ethical powers. Technological advances today in holographic imaging and real time graphics are making recreating his vision of him ever more possible and we are thrilled to work with the Roddenberry Estate to preserve Gene’s salient messages for humanity in the most authentic and open ways possible.”

“We started archiving materials from my father’s life over a decade ago hoping to preserve not just the iconic objects that made Star Trek such a successful franchise but more importantly the personal notes, internal documents, and never seen prototypes that fueled the various iterations of Star Trek,” added Rod Roddenberry. “We wanted to provide a behind-the-scenes personal story about Gene and the evolution of the series, which has made such a profound impact on the development of humanity in the 20th century, inspiring so many around the world. With new real time and holographic technologies it is getting more and more possible to immerse new generations who didn’t experience Star Trek first-hand into my father’s universe, and we are thrilled to push forward on this new frontier in collaboration with 3D graphics pioneer, OTOY.”

The Roddenberry Archive immersive experience and behind-the-scenes video logs are available for the public to view online at this link. These materials will be augmented with additional archive features throughout 2022. All of the Roddenberry Archive documents are also preserved on the Render Network, providing an open blockchain digital archive of all of Roddenberry’s lifetime of works in an open format for future generations to access.

The 56-Year Mission: Las Vegas runs at Bally’s through August 28th. The Star Trek experience teaser “Memory Wall” can be viewed above.