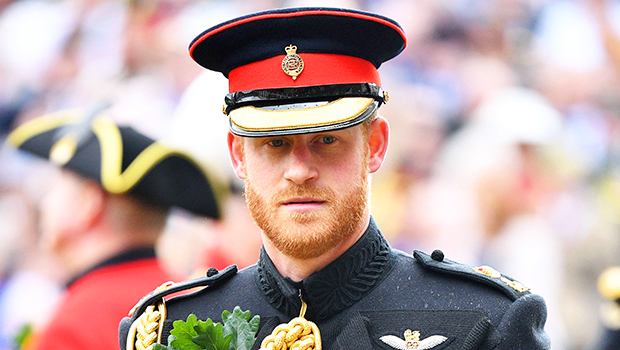 Prince Harry38, can wear his military uniform as he honors his late grandmother Queen Elizabeth II at a vigil on Saturday night (Sept. 17), according to The Mirror and royals reporter Omid Scobie. Harry will don the uniform at the lying-in-state vigil in Westminster Hall. The Duke of Sussex will be joined by his brother Prince William, 40, who will also wear his military uniform. The brothers and their cousins Peter Phillips, Zara Tindall, Princess Beatrice, Princess Eugenie, Lady Louise Windsorand James, Viscount Severn will stand in silence for a 15-minute vigil next to the late monarch’s coffin.

𝐔𝐏𝐃𝐀𝐓𝐄: In a dramatic u-turn, palace officials have informed Prince Harry that he CAN wear his military uniform at a final vigil. On Saturday evening, Harry will join seven other grandchildren at Westminster Hall to stand in silence for 15 minutes by the Queen’s coffin.

Harry served in the British army for two decades and spent two tours in Afghanistan, but since he’s no longer a working royal he had to wear civilian clothes when he walked behind the Queen’s casket at the Sept. 14 procession. Harry confirmed via his spokesperson that he wouldn’t be dressed in military attire for the procession. “[Prince Harry] will wear a morning suit throughout events honoring his grandmother. His decade of military service is not determined by the uniform he wears and we respectfully ask that focus remain on the life and legacy of Her Majesty Queen Elizabeth II,” the statement read.

The royal family received significant backlash when it was announced that the Queen’s son Prince Andrewwho was stripped of his royal duties due to his association with convicted sex-offender Jeffrey Epstein, could wear his military uniform to the vigil, while Harry initially could not. This double-standard is likely what led to Harry getting approved to wear his military uniform to the vigil. The Queen’s funeral is scheduled for Sept. 19, which Harry and the rest of the royal family will attend.

Prince Harry and his wife Meghan Markle, who moved to California in 2020, were in London when the Queen passed on Sept. 8 in Scotland. They’ve remained in the UK to honor Harry’s late grandmother along with the rest of the royal family, including William and his wife Kate Middleton.

At the Service for the Reception of Her Majesty’s Coffin, Harry got emotional as the Queen’s coffin was carried away from Buckingham Palace for the final time. Harry was the only member of the royal family to show such intense emotion during the event. In the wake of the Queen’s death, Harry’s father became King Charles IIIwhile William is now the heir to the throne.