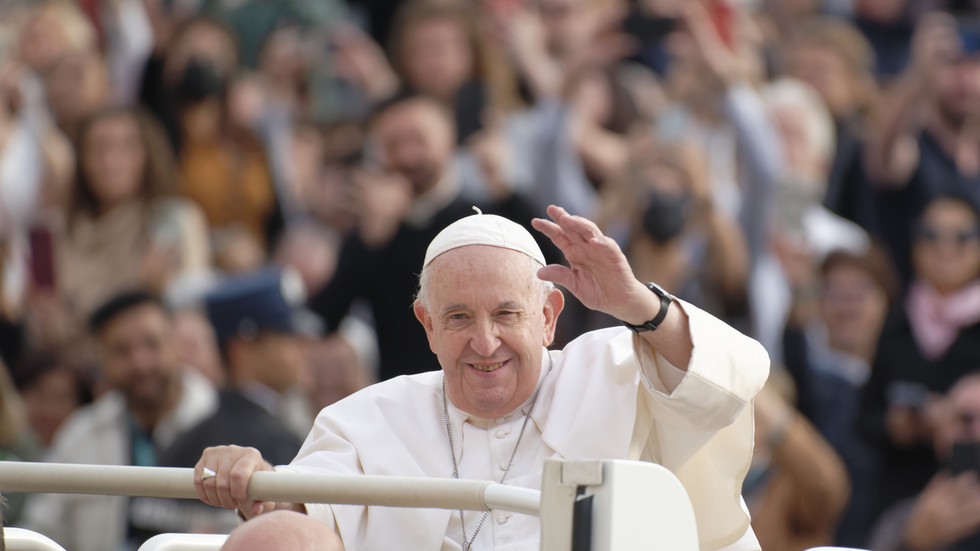 The Pontiff revealed childhood experiences left him “in love” with Ukraine, while he also has “high esteem for Russian humanism”

The ongoing conflict between Russia and Ukraine deeply grieves Pope Francis, as he has great “affection” for each of the rivaling countries. The Pontiff made the remarks on board his plane on Sunday as he was returning from his visit to Bahrain.

When I was eleven years old, there was a priest close to me who was celebrated in Ukrainian and had no altar boys, and he taught me to serve Mass in Ukrainian, and all these Ukrainian songs, I know them in their language because I learned them as a child.

While the Pontiff did not elaborate on what exactly “the Ukrainian liturgy” was, he was apparently referring to the Ukrainian Greek Catholic Church, which defected from the Orthodox Patriarchate of Constantinople in the late 16th century and reached a union with the Holy See.


Francis also made a call to refrain from blaming all the Russian people for the ongoing hostilities, instead blaming the “cruelty” of the conflict on “the mercenaries, on the soldiers who go off to war as an adventure.”

“I prefer to think of it this way because I have high esteem for the Russian people, for Russian humanism. Just think of Dostoevsky, who to this day inspires us, inspires Christians to think of Christianity,” he explained.

Pope Francis has repeatedly tried to mediate in the conflict that broke out in late February, calling on both sides to reach an “immediate ceasefire” and to negotiate “solutions that are not imposed by force, but consensual, just and stable.” Attempts to negotiate, exhibited by Moscow and Kiev early in the conflict, have been stalled for a month already. In September, Ukrainian President Vladimir Zelensky officially refused to negotiate for as long as his Russian counterpart Vladimir Putin remains in power. The move was prompted by referendums held in former Ukrainian territories Kherson and Zaporozhye Regions, as well as in Donetsk and Lugansk People’s Republics, and by their subsequent accession to the Russian Federation.