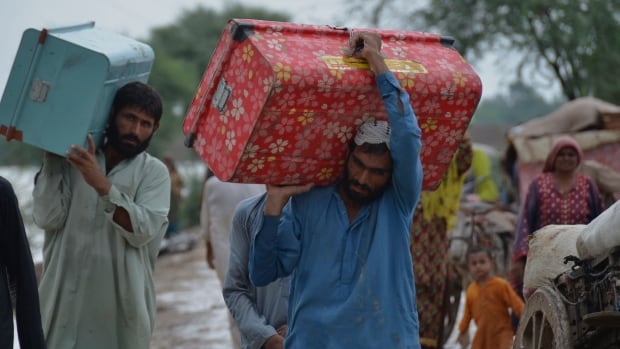 His request on Twitter came amid exceptionally heavy rain that continued lashing Pakistan, raising the overall death toll from mid-June to 937.

Sharif said he met with foreign diplomats in the capital, Islamabad, on damages caused by the floods.

“The ongoing rain spell has caused devastation across the country,” he tweeted, thanking other countries and groups for their support. “Together we will build back better.”

The country’s climate change minister, Sherry Rehman, told Reuters on Thursday that 33 million people have been affected by the flooding.

Floods have damaged 170,000 homes, washed away roads and destroyed nearly 150 bridges, according to the National Disaster Management Authority. Although floodwater receded in some areas, the situation worsened in Sindh province, where rescue workers were using boats to evacuate marooned people. Thousands of flood-affected people were living in makeshift homes and tents.

The crisis forced Sharif’s government to declare a state of emergency.

A United Nations statement on Thursday said it has allocated $3 million US to UN aid agencies and its partners in Pakistan to respond to the floods. “This will be used for health, nutrition, food security, and water and sanitation services in flood-affected areas, focusing on the most vulnerable,” it said.

Monsoon rains in Pakistan typically begin in July. But this year, heavy downpours started lashing the country in June, triggering floods. Scientists say climate change is a major factor behind the unusually severe weather, which has made life miserable for millions of people.

According to Reuters, the UN Office for the Coordination of Humanitarian Affairs said Thursday that 184,000 people have been displaced to relief camps across the country.

According to Rehman, right now the real challenge was saving lives and arranging tents and food for homeless people.

“This is a humanitarian disaster of epic proportions, thousands are without shelter, many are without food and people are stranded,” Rehman said. “We need to ask not just the provinces and Islamabad, it is beyond the capacity of any one administration or government to rehabilitate and even manage the rescue and relief.”