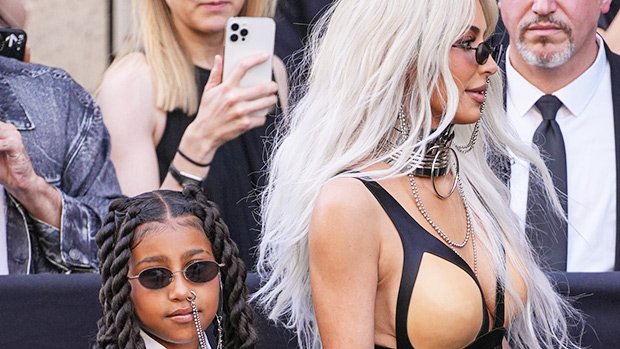 North West just proved that she’s the luckiest 9-year-old ever when she took a private tour of Paris with her mom, Kim Kardashian. Kim posted photos of North on a tour of Paris, including one photo that had her staring at the iconic Mona Lisa painting.

Kim posted a slew of photos on her Instagram story of North gallivanting around Paris and in one photo taken from behind, North was seen staring at the Mona Lisa painting, which is held at The Louvre museum. In the photo, North had her dark hair down in long braids while wearing a pair of gray jeans with a baggy Balenciaga sweatshirt.

Later on in Kim’s story, North also stood on a pedestal outside The Louvre, pointing her finger to make it look like she was touching the tip of the iconic building. The Louvre is completely made out of glass and is in the shape of a triangle, so it looked like North could touch it with her bare hands.

In the photo, North rocked a baggy black sweatshirt that read in rainbow bubble letters, “90% Balenciaga, 10% Myself.” She styled the sweatshirt with a pair of loose jeans that had drawings on the front, as well as a pair of black chunky platform boots with silver studs on the front and sides.

North has been taking Paris Fashion Week by storm and aside from this look, she wore a vintage blue jacket that was passed down to her by her dad, Kanye West. North wore her dad’s blue vintage Pastelle jacket that had red leather strips down the shoulders and a neon yellow logo on one side. She rocked the coat, which was first worn by Kanye in 2008, with a pair of black pants and the same chunky black shoes.