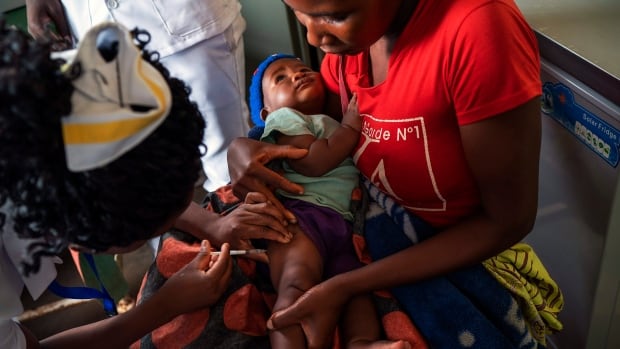 Encouraging new data on a malaria vaccine from Oxford University goats well for the global effort to combat the mosquito-borne disease that kills a child every minute, its makers said on Wednesday.

After decades of work, the only approved malaria vaccine, Mosquirix, made by British drugmaker GSK (GSK.L), was recently endorsed by the World Health Organization (WHO).

It also has a manufacturing advantage, he said, citing a deal with the Serum Institute of India to produce 200 million doses annually, starting in 2023. In contrast, GSK has committed to produce up to 15 million doses of Mosquirix every year through 2028, as well less than the roughly 100 million doses a year of the four-dose vaccine the WHO says is needed long-term to cover around 25 million children.

GSK has said it cannot make enough Mosquirix to meet the vast demand without more funds from international donors.

On Wednesday, data from a mid-stage study on more than 400 young children who received a fourth dose of the Oxford shot after the primary three-dose regimen was published in the Lancet journal.

Vaccine effectiveness was 80 percent in the group that received a higher dose of the immune-boosting adjuvant component of the vaccine, and 70 percent in the lower-dose adjuvant group, at 12 months following the fourth dose. The doses were administered ahead of the peak malaria season in Burkina Faso.

Oxford to submit more data on vaccine to WHO soon

The complicated structure and lifecycle of the malaria parasite has long stymied efforts to develop vaccines. GSK’s Mosquirix was conceived back in the 1980s, and paved the way for the Oxford team to create a more potent vaccine, Hill said.

However, it is difficult to make direct comparisons between the two shots, given data from an ongoing larger phase III trial testing the Oxford shot involving 4,800 participants is still to come.

WATCH | Malaria vaccine approval has had ‘tremendous impact,’ WHO says:

Dr. Mary Hamel, the World Health Organization’s malaria vaccine implementation lead, says the recent approval of the vaccine has already had a ‘tremendous impact’ in the fight against malaria and the challenge moving forward will be procuring enough vaccines to meet the demand.

Meanwhile, late-trial data published last year showed that if Mosquirix was administered stage ahead of peak malaria season in high transmission areas, it was nearly 63 percent effective against clinical malaria.

Comparisons between the two vaccines at this stage must be tentative, given they have not yet been compared head-to-head in the same trial, said David Conway from the London School of Hygiene & Tropical Medicine.

However, these phase II data suggest the Oxford shot is a step forward from Mosquirix, improving efficacy and the retention of immunity, said Alister Craig from the Liverpool School of Tropical Medicine.

Oxford expects to submit phase III data to the WHO imminently, hoping for a key endorsement next year.