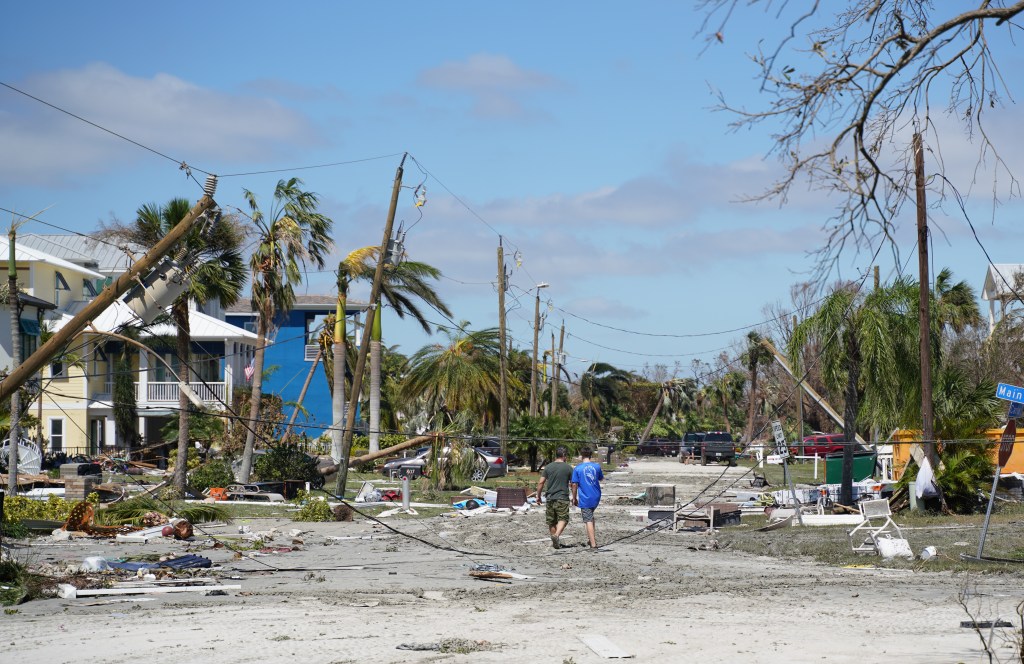 UPDATE, FRIDAY, 10:17 AM PT: President Joe Biden warned that Hurricane Ian continues to pose a threat, as it strengthened again and made landfall on Friday in South Carolina.

“Please listen to all the warnings and directions from local officials and follow their instructions,” Biden said from the White House.

The hurricane made landfall near Georgetown, SC at 2:05 PM ET, according to the National Hurricane Center, with maximum sustained winds of 85 mph.

The hurricane’s strike of Florida’s southwestern coast on Wednesday “is likely to rank among …the worst in the nation’s history,” Biden said.

“You have all seen on television homes and property wiped out. It’s going to take months, years to rebuild.”

At least 25 people have died in the hurricane, according to CNN, while aerial news images have shown vast sections of homes and businesses destroyed in Fort Myers Beach. Sanibel Island has been cut off from the mainland after major damage to a causeway.

Biden said that “America’s heart is literally breaking” as networks and local stations have shown images of the destruction.

He said that 117 people in southwest Florida had been rescued by federal and state officials. He recounted a conversation he had with Coast Guard lieutenant commander Christopher Hooper, who talked about the rescue of a 94-year-old woman who was hoisted up into a helicopter, as well as the rescue of a one-month old baby.

He also said that 44,000 utility workers were being deployed to restore power in the state.

In addition to what we’re doing for Florida and South Carolina, we remain focused on recovery efforts in Puerto Rico as well,” Biden said. “We’re going to stay with it, and stay at it for as long as it takes.”

PREVIOUSLY, THURSDAY, 9:59 AM PT: President Joe Biden said that Hurricane Ian “could be the deadliest hurricane in Florida’s history.”

“The numbers are still unclear, but we are hearing early reports of what may be substantial loss of life,” he said during a visit to FEMA headquarters.

Millions are without power in the state, and authorities have been reporting numerous efforts to rescue residents from the floodwaters. The storm also damaged bridges in Fort Myers, FL, while Florida Governor Ron DeSantis told reporters that “you’re looking at a storm that’s changed the character of a significant part of our state,” by the Orlando Sentinel.

He later said that Sanibel Island “got hit with really Biblical storm surge. It washed away roads. It washed away structures … There have been a number of people that have been identified and brought off the island safely.”

Reporters on Thursday fanned throughout the state to capture the extent of the damage. Many networks focused on Fort Myers, where some of those who stayed during the hurricane thought that the storm would hit farther to the north, in Tampa. Instead, their communities were in the center of the storm and their surge.

CNN’s Randi Kaye interviewed some residents of a mobile home park whose property was destroyed by the floodwaters. “They don’t know where to start,” she said, with strewn debris in the backdrop. One resident, who moved to the area one year ago, told her that “everything is flooded. Everything is ruined. We grabbed what we could. We didn’t think it would be this bad.”

“I have never seen a storm that has caused so much damage in this area before,” Fort Myers Mayor Kevin Anderson later said in a phone interview with the network, as it ran images of the devastation from a local broadcast station.

Networks showed images of whole neighborhoods with widespread devastation. One woman described to NBC News how she protected her paralyzed husband by zip-tying him to the hospital bed and covering him in pillows and plastic bags, as well as dressing him in a life jacket. “He was scared,” she tearfully said. “I wasn’t there to comfort him. I was hiding. I was a coward. I was under the table hiding.”

WINK-TV in Fort Myers took to Facebook and other social media sites after power went out at the station. Its entire first floor was flooded. Meteorologist Dylan Federico posted devastating pictures on Twitter of the damage. “Fort Myers Beach is gone,” he wrote.

David Muir will anchor World News Tonight from Florida on Thursday evening to cover the damage from Hurricane Ian and continuing the threat of the storm.

Lester Holt of NBC Nightly News anchored from the state on Wednesday and Norah O’Donnell started anchoring from the Sunshine State on Tuesday.

“We know many families are hurting, many are hurting today, and our entire country hurts with them,” Biden said in his remarks at FEMA.

PREVIOUSLY, WEDNESDAY, 12:43 PM PT: Hurricane Ian made landfall as an “extremely dangerous” Category 4 hurricane in the southwest coast of Florida, the National Hurricane Center said in a midafternoon update Wednesday.

According to The Washington Post‘s Capital Weather Gang, the hurricane, with 150 mph winds, is tied as the fifth strongest to strike the US on record.

“It is awesome to behold in the most scary way,” CNN’s Bill Weir said from Punta Gorda, FL, with the sight of palm trees and power poles being pummeled by the winds.

The hurricane made landfall near Cayo Costa, FL.

*RARE* first person view of storm appears. This camera is 6 feet off the ground on Estero Blvd in Fort Myers Beach, FL. Not sure how much longer it keeps working. You’ll see it live only on@weatherchannel #Ian pic.twitter.com/WwHtvgVxjY

NBC Nightly News anchor Lester Holt will also anchor from the state this evening. ABC’s World News Tonight anchor David Muir will be in New York, but those plans could change. All of the networks have dispatched correspondents and meteorologists on the ground.

Anchoring from Tampa on Tuesday, O’Donnell told viewers, “Florida is a state on the edge tonight, as it prepares for what could be the biggest storm in years.”

The approaching hurricane, expected to make landfall later on Wednesday, has scrambled schedules. Networks had thought that much of Wednesday’s coverage would be devoted to the next January 6th Committee hearing, but that was postponed on Tuesday because of the focus on the storm.

On CNN on Wednesday, anchor John Berman, in a rather tranquil Tampa, warned of hours and hours of approaching rain, even as forecasters now predict that the hurricane will make landfall about 100 miles south.

The hurricane is expected to hit the state in mid-to late-afternoon, and Berman told viewers that at the current intensity of 155 mph, just short of a category 5 storm, it would be “one of the most powerful storms ever to make landfall in the United States.”

José Díaz-Balart anchored his MSNBC show from Bradenton, FL and, among those he interviewed was correspondent Kerry Sanders, who covered Hurricane Andrew in 1992, reporting from Punta Gorda, in the center of where the storm is expected to hit.

Sanders warned of the storm surge. “You can’t gamble on these kind of predictions, because it’s really hard to determine,” he said.

Fox News Channel has featured updates from its streaming service Fox Weather, as correspondents Steve Harrigan in Charlotte County, FL, also warning of a surge. Amid blustery winds, he said that the hurricane “strengthened dramatically, and I think it caught a lot of people by surprise.” He also warned that it was too late for people to evacuate, given the difficulty of getting over bridges. The channel plans to extend Fox News @ Night with Trace Gallagher to start at 11 PM ET, bumping Gutfeld!, and will simulcast Fox Weather from 1 AM to 4 AM. Updates are also expected during the network’s primetime programming.

President Joe Biden, at an event on Wednesday, pledged support for the state. “We will be there every step of the way: That is my absolute commitment to the state of Florida.”